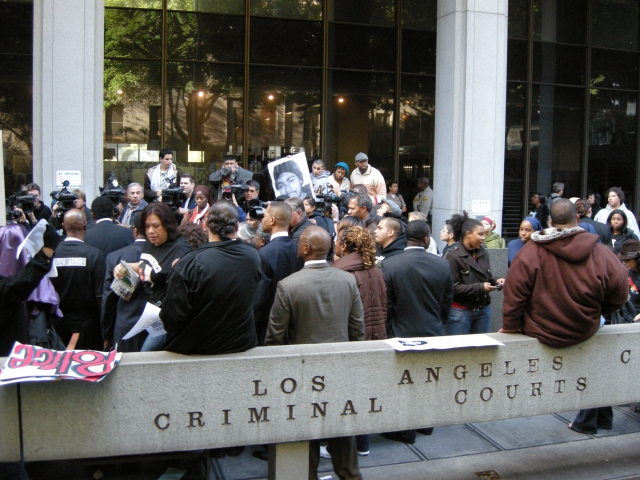 original image (4000x3000)
It has been one year since Oscar Grant was brutally murdered by BART policeman Johannes Mehserle. The power of the people of Oakland and the Bay Area has ensured that he is standing trial for murder and not getting away unscathed as is the normal practice in police killings and brutality of our community members.

Over the course of 2009 there have been hundreds of regular folks like grandmothers, students, young, old, black, white, latino and asian demanding justice for Oscar Grant in the manner and tradition that people the world over have demanded egregious wrongs be corrected: taking to the streets to demand justice. After days and nights of rebellion in the streets of Oakland, the DA had to arrest the former BART cop for murder. The uprising also came with police repression. Over 100 people were caught up in the police sweep and arrested. Eventually all charges were dropped except felony charges against two people which are still pending.* There can be no peace without justice.

Numerous teach-ins, workshops, video showings, and the resurgence of Oakland Cop Watch are just a few of the outstanding things that have materialized as a result of the movement that has emerged to fight for justice for Oscar Grant and all victims of police brutality such as Anita Gay of Berkeley and Gary King of Oakland.

The drama in the courtroom has been a real-life learning experience for many. Mehserle had his motion granted to move the trial to Los Angeles and there is a slight possibility that it can be moved once again to San Diego.

Friday, January 8th was the first hearing in the case of the People v. Mehserle in the Los
Angeles Superior Court. Over 100 people rallied in front of the criminal court building in downtown Los Angeles in the 77 degree summer-like weather. There were a large number of folks from Oakland and the Bay Area that traveled to attend the hearing and Oscar Grant’s family was well represented there. The Oakland Assembly for Justice for Oscar Grant and the LA Coalition for Justice for Oscar Grant has joined together in organizing their respective communities to fight for justice for Oscar. The lively crowd of mostly black and brown young folks enthusiastically stood in solidarity with the family and the community against the racist police killing of Oscar Grant. Police brutality in the Los Angeles area is at an epidemic level with over 80 people murdered by the LA police & sheriffs in the past two years.

The trial judge is Robert Perry who stated for the record that he never saw the video on television of Mehserle shooting Oscar Grant III. Although the judge said he didn’t know anything about the case, many observers in the courtroom found it unbelievable. Despite the court media representatives wanting cameras in the courtroom, the judge refused to grant permission for Oakland KTVU, Channel 2’s request to film the proceedings.

Judge Perry renewed the gag order that Judge Jacobson in Oakland had ordered for all parties involved in the trial. Mehserle’s attorney actually had the audacity to ask the judge to include the Grant family’s attorney, John Burris, who is representing them in their $50 million civil suit, to be included in the gag order. The judge refused to grant that request.

The judge said he expected the trial to begin in mid-May and even threatened that if the trial takes five years it will be heard in his courtroom. The next hearing in the case will be Friday, February 19 at 8:30 a.m. to hear Mehserle’s motions to reduce his $3 million bail and to disqualify the District Attorney. 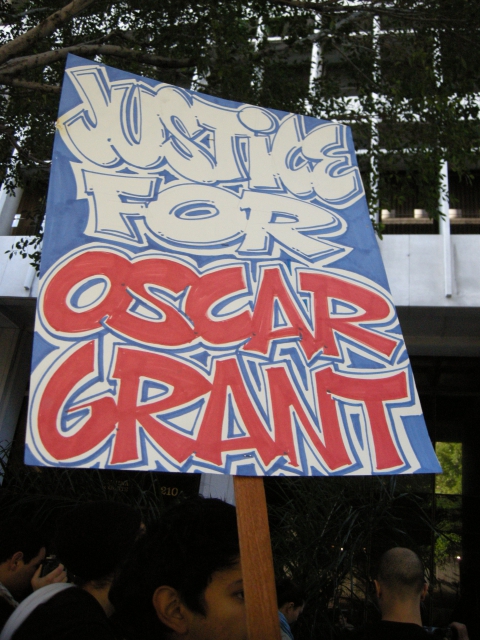 original image (3000x4000)
Add Your Comments
Support Independent Media
We are 100% volunteer and depend on your participation to sustain our efforts!