report from inside (and outside) court room


First Los Angeles Status Hearing: Judge Robert Perry presided over the first hearing in the murder trial of Johannes Mehserle since the case was moved from Alameda County to Los Angeles County. The gag order for the defense and prosecution issued in a previous hearing in Alameda County remains in place. Recording equipment will be banned from the court room. Mehserle's attorney Michael Rains intends to file several motions favorable to the defense ...
[full January 8th, 2010 hearing notes below] 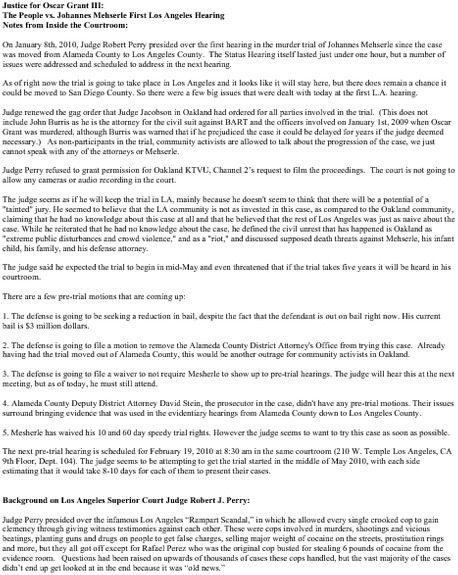 On January 8th, 2010, Judge Robert Perry presided over the first hearing in the murder trial of Johannes Mehserle since the case was moved from Alameda County to Los Angeles County. The Status Hearing itself lasted just under one hour, but a number of issues were addressed and scheduled to address in the next hearing.

As of right now the trial is going to take place in Los Angeles and it looks like it will stay here, but there does remain a chance it could be moved to San Diego County. So there were a few big issues that were dealt with today at the first L.A. hearing.

Judge renewed the gag order that Judge Jacobson in Oakland had ordered for all parties involved in the trial. (This does not include John Burris as he is the attorney for the civil suit against BART and the officers involved on January 1st, 2009 when Oscar Grant was murdered, although Burris was warned that if he prejudiced the case it could be delayed for years if the judge deemed necessary.) As non-participants in the trial, community activists are allowed to talk about the progression of the case, we just cannot speak with any of the attorneys or Mehserle.

Judge Perry refused to grant permission for Oakland KTVU, Channel 2’s request to film the proceedings. The court is not going to allow any cameras or audio recording in the court.

The judge seems as if he will keep the trial in LA, mainly because he doesn't seem to think that there will be a potential of a "tainted" jury. He seemed to believe that the LA community is not as invested in this case, as compared to the Oakland community, noting that he had no knowledge about this case at all and that he believed that the rest of Los Angeles was just as naive about the case. While he reiterated that he had no knowledge about the case, he defined the civil unrest that has happened is Oakland as "extreme public disturbances and crowd violence," and as a "riot," and discussed supposed death threats against Mehserly, his infant child, his family, and his defense attorney.

The judge said he expected the trial to begin in mid-May and even threatened that if the trial takes five years it will be heard in his courtroom.

There are a few pre-trial motions that are coming up:

1. The defense is going to be seeking a reduction in bail, despite the fact that the defendant is out on bail right now. His current bail is $3 million dollars.

2. The defense is going to file a motion to remove the Alameda County District Attorney's Office from trying this case. Already having had the trial moved out of Alameda County, this would be another outrage for community activists in Oakland.

3. The defense is going to file a waiver to not require Mesherle to show up to pre-trial hearings. The judge will hear this at the next meeting, but as of today, he must still attend.

4. Alameda County Deputy District Attorney David Stein, the prosecutor in the case, didn't have any pre-trial motions. Their issues surround bringing evidence that was used in the evidentiary hearings from Alameda County down to Los Angeles County.

5. Mesherle has waived his 10 and 60 day speedy trial rights. However the judge seems to want to try this case as soon as possible.

The next pre-trial hearing is scheduled for February 19, 2010 at 8:30 am in the same courtroom (210 W. Temple Los Angeles, CA 9th Floor, Dept. 104). The judge seems to be attempting to get the trial started in the middle of May 2010, with each side estimating that it would take 8-10 days for each of them to present their cases.

Judge Perry presided over the infamous Los Angeles “Rampart Scandal,” in which he allowed every single crooked cop to gain clemency through giving witness testimonies against each other. These were cops involved in murders, shootings and vicious beatings, planting guns and drugs on people to get false charges, selling major weight of cocaine on the streets, prostitution rings and more, but they all got off except for Rafael Perez who was the original cop busted for stealing 6 pounds of cocaine from the evidence room. Questions had been raised on upwards of thousands of cases these cops handled, but the vast majority of the cases didn’t end up get looked at in the end because it was “old news.”

Notes from Demonstration Outside the Court Room:

Over 100 people demonstrated for justice for Oscar Grant and other victims of police violence in front of the court house, determined to let authorities know that the people will be satisfied with nothing less than a vigorous prosecution and the eventual conviction of Johannes Mehserle for the murder of Oscar Grant. The LA Coalition held a press conference in front of the court house before the hearing began. Another shorter one was held to debrief those outside after the hearing. Speakers, attendees, and participating groups included Wanda Johnson, Oscar Grant’s mother, Oscar's uncle Cephus Johnson, Jack Bryson, father of two of Oscar's friends, Keisha Brunston, the aunt of Deondre Brunston (killed by police), Senora Porfiria Rivera, mother of Carlos Rivera (killed by police), Oakland Assembly's Trial Committee, October 22nd Coalition, The Black Riders Liberation Party, Homies Unidos, Coalition for Community Control Over Police, Kabataang Maka-Bayan, AnakBayan LA, Anti-Racist Action LA, Libros Revolucion, Los Angeles Copwatch, Revolutionary Autonomous Communities, A New Way of Life Reentry Project, and LA Indymedia.

Will There Be Justice for Oscar Grant?
http://uprisingradio.org/home/?p=11793


In-Depth Background on the Mehserle Murder Case and the Justice for Oscar Grant Movement in Oakland:
http://www.indybay.org/oscargrant