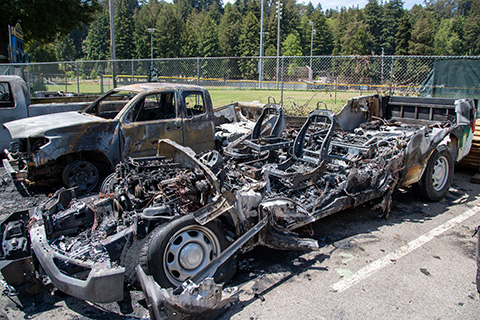 Multiple city vehicles were set on fire and destroyed at a maintenance yard at Harvey West Park in Santa Cruz on June 2. Graffiti left at the scene read: "Leave Homeless Alone!!" and "Stop Sweeping!" City officials estimated the damage to be approximately $300,000. No one has taken credit for the attack and there have been no arrests. The vehicles were destroyed in advance of the impending mass eviction at the San Lorenzo Park Benchlands homeless encampment, which the City of Santa Cruz had announced would begin in July. Following the fire, the city is now saying it will close the camp at the end of summer.

Despite community pleas to stop the intended "closure," which was announced in May, City Manager Matt Huffaker held firm to his plan to evict the 300-400 people who reside in the Benchlands. Authorities falsely claim they'll be able to shelter anyone who applies, but there are only 150 spaces actually available for those expected to be displaced from Benchlands, much less the 1000-2000 folks currently living outdoors in Santa Cruz. HUFF (Homeless United for Friendship & Freedom) and Food Not Bombs have worked to raise awareness through a series of "Koffee Klatches," demanding that the city revise its homeless policies overall and that there be "No Evictions Without Real Shelter."