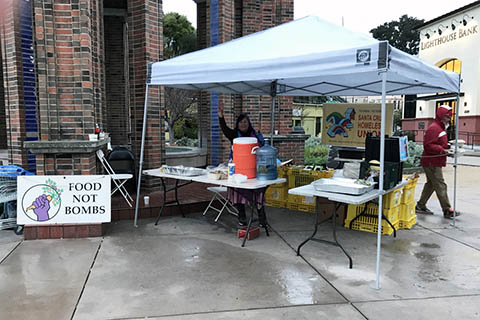 On March 20, Santa Cruz Police Chief Andy Mills and a dozen or more cops and park rangers evicted an encampment of unhoused people along Water Street near the post office. Mills gave people the choice of moving into fenced areas in the city or facing arrest and property confiscation. Robert Norse states, "This 'out of sight / out of town' policy, while claiming a public health rationale, rings false given the lack of protected indoor shelter being offered."

Long before the COVID-19 pandemic began, activists have demanded City Manager Martin Bernal reopen bathrooms and supply porta-potties. With 1,000 - 2,000 people living outside without 24-hour bathroom access, the situation seemed to be a health crisis in the making. Some regarded it as a deliberate attempt to drive away the unhoused so as not to "enable" them.

Food Not Bombs, the Santa Cruz Homeless Union, Homeless United for Friendship & Freedom, Bagels on Bikes, and a variety of other activists combined on Sunday night to establish a round-the-clock survival support station at the Town Clock which they termed the COVID-19 Relief Center. Other food services either shrunk or shut down.