He gave the refugees being created the choice of moving into fenced areas at Laurel and Front and other places in the City or facing arrest and property confiscation. The emigration was reportedly facilitated by CACH [Community Advisory Committee on Homelessness] activists Rafa Sonnenfeld and Serg Kagno who may be involved as paid employees in the new concentration zones or "triage" camps.

DENYING DECENT FACILITIES FOR MONTHS
Activists have demanded City Manager Martin Bernal reopen bathrooms and place portapotties long before the COVID-19 pandemic began to little effect. For months the City stalled or obstructed the installation of portapotty and washing station placement at the Post Office, along Coral St., at the end of Felker, and elsewhere. With 1000-2000 people living outside without 24-hour bathroom access, this seemed a health crisis in the making. Some regarded it as a deliberate attempt to drive away the homeless so as not to "enable" them.

It seems to be a continuing part of the city's unofficial but toxic "unwelcoming the homeless".which includes sweeps, the Louden Nelson bathroom closing, the cutback of MHCAN services, continued sweeps, & Mills' recent 7-point program to "correct" "bad behavior" (such as having a tent up during the day).

THE ACTIVIST RESPONSE
Food Not Bombs, the Santa Cruz Homeless Union [SCHU], Homeless United for Friendship & Freedom, Bagels on Bikes, and a variety of other activists combined Sunday night to establish a round-the-clock survival support station at the Town Clock which they termed the COVID-19 Relief Center. Other food services either shrunk or shut down (including the Louden Nelson Senior Meal, the St. Francis Soup Kitchen, Calvary Church's Monday Meal, MHCAN, and others).

ANOTHER SWEEP, ANOTHER BETRAYAL
In response, on Thursday March 19, instead of installing portapotties and wash stations at the Town Clock or the near the Post Office encampment, City authorities posted notices demanding the Post Office sidewalk, the Town Clock park, and the Scope Park area all be vacated on pain of property confiscation and misdemeanor charge.

This was done in violation of the Standard Operating Procedures passed by City Council last spring as part of their move to shut down Ross Camp. The City campbusters were unable to use the pretext of "trespass" as the Post Office encampment was on a public sidewalk, a very wide public sidewalk. The shut down also violated the Martin v. Boise decision by not providing adequate indoor shelter options for those displaced..

HISTORY OF NEGLECT, USING THE COVID-19 CRISIS
To some this was no surprise, since homeless people have been crammed into the Salvation Army's Laurel St. shelter for the last few months, sleeping within inches of each other in patently unhealthy environment, even as the pandemic raged for the last month.

Claims of "public health emergency" have rung false, given the lack of interest in renting or acquiring indoor shelter with access to soap, hot water, showers, and a shelter-in-place setting. This was in fact the demand by SCHU activists, who offered to help city officials, provided real safe options were made available.

Officials could not claim any cases of COVID-19 or sickness, for that matter, at the Post Office encampment.

Some questioned the wisdom of driving homeless people away from the stable, clean, and self-sheltering community at the Post Office in the midst of a pandemic. Police have directed the refugees to enclosed fenced off areas by the Arena and several other "triage" spaces. Though reportedly, there were no medical personnel there.

PROMISES MADE, PROMISES BROKEN
Food Not Bombs activist Keith McHenry and Santa Cruz Union president Alicia Kuhl reportedly got an agreement from Mayor Cummings to meet at noon today to discuss a cooperative arrangement. Kuhl and McHenry sought assurances to bring to the homeless community that all unhoused individuals city-wide would be placed in hotel and motel rooms first--many of which are presumably vacant given the current state-wide shelter-in-place edict.

Cummings reportedly promised there would be no move on the Post Office encampment until Monday. Mills and his armed men moved in to drive folks away two hours before the scheduled meeting.

REAL POWER BEHIND THE PERSECUTION
Informed sources suggest that City Manager Martin Bernal is the mastermind behind the City's response or non-response as real protective shelter goes. Some activists were pleased that the City was finally installing the long-refused but still primitive sanitation facilities. Others angrily accused CACH activists Rafa Sonnenfeld and Serg Kagno of selling out to the City in return for a seat at the table of those in power as helpers in this forced dispersal of homeless folks without adequate shelter.

Cooper and her partner Russell moved their encampment from the forbidden fenced off zone across the street to the sidewalk next to the bank. The rest of the residents were dispersed or given the 'option" of going to one of the several fenced off "triage" encampments elsewhere in the City.

She is particularly notorious in the homeless community for misleading and false testimony before the federal court last year which drove hundreds of people out of Ross camp with false promises of adequate shelter. 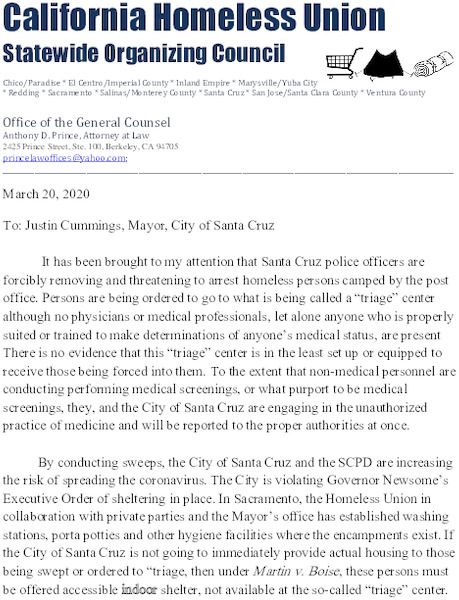 Download PDF (142.6KB)
The following letter was sent to Mayor Justin Cummings today by Anthony Prince, General Counsel of the California Homeless Union. The Mayor is not known for quick or relevant responses to such letters, much less for remedial action--or such is my experience. Still, hats off and thanks to Anthony.
END_OF_DOCUMENT_TOKEN_TO_BE_REPLACED
§Clarification
by Robert Norse (rnorse3 [at] hotmail.com)
Rafa Sonnenfeld and Serg Kagno have e-mailed me that they are not paid. City staffers, they say, are slated to take over in several days. Both are operating under the direction of Susie O'Hara, who decides who gets a spot and who doesn't.

Sonnenfeld, who I spoke with last night, says while visitors are not allowed, those in the fenced area are allowed to come and go as they please. This in the one area near the sports Arena--currently the only one open.

He added that he entered this arrangement with the understanding that the area would serve the most vulnerable city-wide and not be used as a pretext to clear the Post Office encampment. This is not what what was done, of course.

He also confirmed that only one person from that encampment has gotten an actual indoor Motel/Hotel voucher.
END_OF_DOCUMENT_TOKEN_TO_BE_REPLACED
Add Your Comments
Support Independent Media
We are 100% volunteer and depend on your participation to sustain our efforts!