Add an Event
Newswire
Calendar
Features
Home
Donate
From the Open-Publishing Calendar
From the Open-Publishing Newswire
Indybay Feature
Related Categories: Santa Cruz Indymedia | Health, Housing & Public Services | Police State & Prisons
Food Not Bombs Faces New Eviction Threat
by Keith McHenry (posted by Norse) (rnorse3 [at] hotmail.com)
Tuesday Jan 18th, 2022 6:56 PM
Food Not Bombs volunteers and those eating with them could be arrested and our equipment stolen by the property speculators on Thursday, January 20, 2022 at 5 PM.from their new location next to University Copy at Cathcart & Pacific.
Their storage area near India Joze is also under threat of seizure. 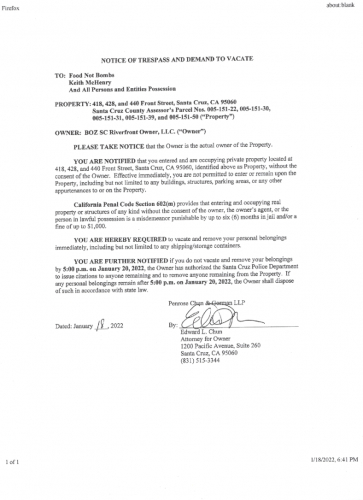 original image (850x1170)
I received the e-mail below from Keith McHenry two hours ago and spoke with him by phone a few minutes ago. He asked me to post it.

He also asked everyone to spread the word and show support at tomorrow's noon-4 PM meal.

I'll be playing his interview on Thursday night at 6 PM on Free Radio which will be archived at http://www.huffsantacruz.org/Lostshows.html

Food Not Bombs volunteers and those eating with us could be arrested and our equipment stolen by the property speculators on Thursday, January 20, 2022 at 5 PM.

Santa Cruz Food Not Bombs is facing eviction again after having provided meals every day with the community for over 670 days of the pandemic.

Food Not Bombs called developer Owen Lawlor about our being forced to move our meal to the vacant lot he owns at 440 Front Street when we were given only three days notice from the city to make way for the Soquel Creek Treated Sewer project on Laurel Street.

We offered to pay him rent and add his company as additional insured to our liability policy while we worked to find a new location. We made it clear that we had been seeking a more permanent location for our daily meal since we were forced out of the lot next to Taco Bell with only one day’s notice. He was friendly and seemed open to working with us but instead his lawyers sent a threatening letter demanding we move in two days.

We had come to realize that to sustain our daily meal we had to place a shipping container on site to hold our equipment since packing and unpacking all our materials and food into our van was leading to volunteer burnout.

Food Not Bombs is not a charity but is dedicated to taking nonviolent direct action to change society so no one has to live on the streets or eat at a soup kitchen and as such require a public location where we can have as much impact as possible to communicate with people about the need to redirect military spending towards healthcare, education and other social services. This requires a location that is accessible and visible.

Property speculator, Owen Lawlor and his associates are destroying our community with the aid of city officials, building a slew of luxury condominium projects. At the same time his projects are driving out many of our favorite local business like India Joze.

This destruction of Santa Cruz is directly connected to the billions of dollars that are flooding into local military contractors like Google, Facebook and dozens of other AI and software developers whose employees can afford to invest in high-priced properties. This is forcing an increase in the rents often forcing local people to become homeless.

Please contact Owen Lawlor at 831-457-1331 to express your displeasure with his lack of community cooperation.

Email the city council to at citycouncil [at] cityofsantacruz.com

SANTA CRUZ FOOD NOT BOMBS IS MOVING OUR BACK STOCK TODAY
We have not missed a day of sharing meals with the hungry of Santa Cruz since March 14, 2020. We will be holding a THANK YOU SANTA CRUZ celebration on the two year anniversary of our daily meal.

A big thanks to Owen Lawlor and the people at Mt Calvary Lutheran Church for helping make this part of our move a success.

Volunteers are unloading our back stock from the shipping container at India Joze and is relocating the rice, beans and other dry goods to Mt Calvary Lutheran.

We have been speaking with the owner of 440 Front Street, Owen Lawlor working out the details. He has been very helpful and understanding about our abrupt move to his property and our need to have time to relocate.

He is asking his partners if it is possible for us to stay until February 1, 2022, to give us time to relocate our meal. He mentioned that he had heard our PSA on KZSC this morning when I shared we need to give the community a heads up as to our new location.

We are seeking a public parking lot downtown where it will be easy for people to find us. We are not a charity but a global mutual aid protest seeking to divert the billions spent on war to healthcare, education, housing and other social services.


UPDATE TO THE UPDATE
Keith mentioned in an evening phone conversation Wednesday night (1-19) that the property owners at the Front and Cathcart site had agreed to grant the meal an extension until Wednesday January 26th. 5 p.m..
http://www,huffsantacruz.org
Add Your Comments
LATEST COMMENTS ABOUT THIS ARTICLE
Listed below are the latest comments about this post.
These comments are submitted anonymously by website visitors.