by Robert Norse (rnorse3 [at] hotmail.com)
For three mornings, activists tabled at City Hall circulating petitions and flyers demanding City Manager Matt Huffaker reverse his plan to sweep the 300-400 people in the Benchlands in July. Some of the flyers distributed are reprinted below. 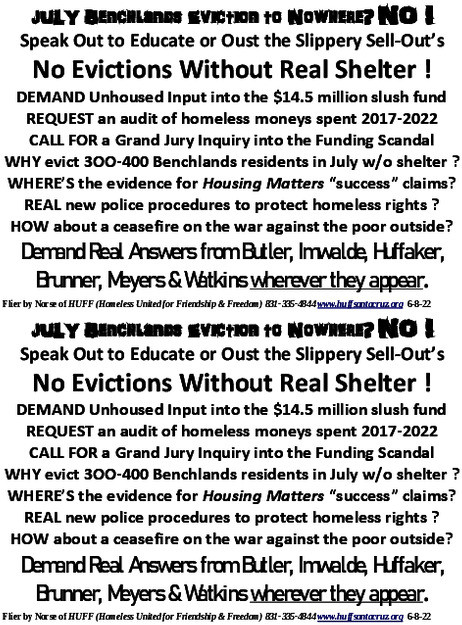 Download PDF (540.2KB)
Plying passersby with coffee and cookies, HUFF members and other activists spoke with community members, gathered signatures and stories, and signed up folks opposing the City Manager's proposed "clearing" of the Benchlands next month.

on p.12 where he writes "As a result of the closure of the Cemetery and Hell’s Trail camps, the number of persons camping in the Benchlands has increased significantly compared to the beginning of the year. Earlier this year, Council provided staff direction to work toward closing the Benchlands to camping, and on April 12, 2022, the City Manager reported to Council that staff are working towards a closure in July 2022..."

NET RADIO DISCUSSIONS AT THE KLATCH
The turnout with light, but some of the conversations were passionate. Initial chats are archived at https://www1.huffsantacruz.org/lost/FRSC%206-9-22.mp3. 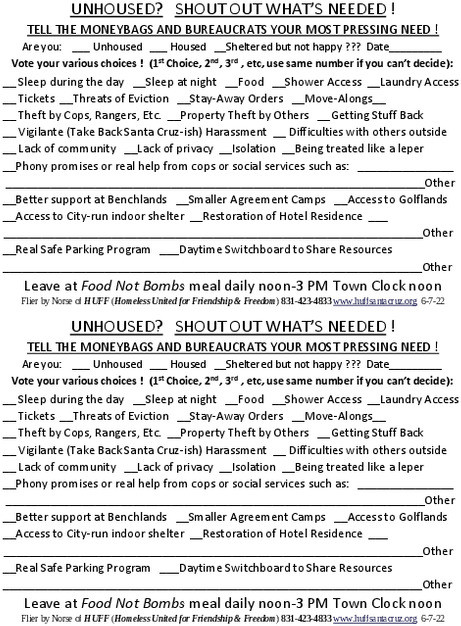 Download PDF (551.4KB)
This flyer is still available and being circulated to sample opinion among those otuside.
END_OF_DOCUMENT_TOKEN_TO_BE_REPLACED
§Petition
by Robert Norse 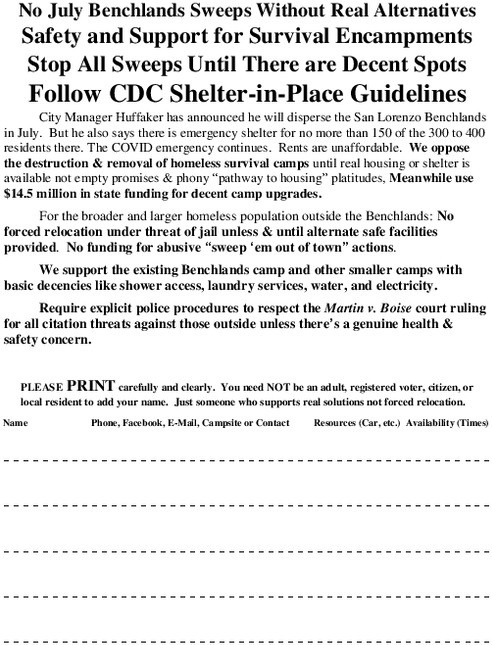 Download PDF (213.9KB)
Petition will likely continue to be circulated in other places.
END_OF_DOCUMENT_TOKEN_TO_BE_REPLACED
§Flyer Explaining the Petition
by Robert Norse 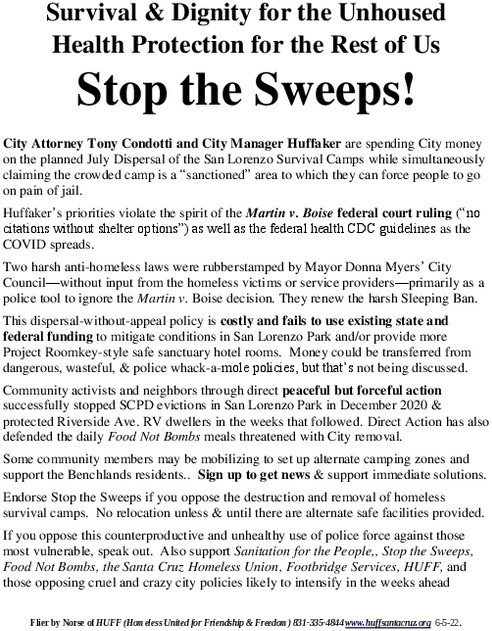 Download PDF (153.0KB)
These flyers can often be found at the Food not Bombs clothing table noon to 3 pm daily at the Town Clock. Or contact HUFF (Homeless United for Friendship & Freedom) at 831-423-4833.
END_OF_DOCUMENT_TOKEN_TO_BE_REPLACED
Add Your Comments
Support Independent Media
We are 100% volunteer and depend on your participation to sustain our efforts!