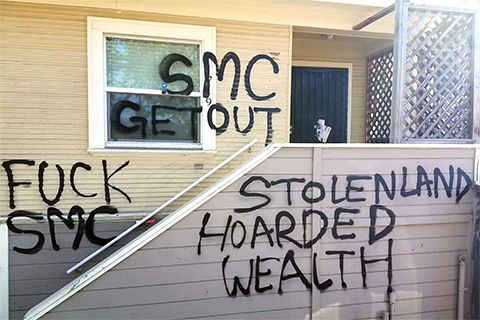 Before dawn on March 5, according to an anonymous communiqué published on Indybay, the houses and vehicles of six officials associated with the University of California, Berkeley, were struck with graffiti and vandalism. UC Berkeley released a statement saying that a multi-agency investigation was underway, since the residences attacked were in Berkeley, Oakland, and San Francisco.

On April 16, another action "repainted" houses believed to be owned by three members of the San Francisco Graffiti Advisory Board. An anonymous communiqué describes a sarcastic note left at the houses. Those claiming responsibility cited the 1998 shooting death of graffiti artist Jonathan See Lim.

Both the University of California and San Francisco police contacted Indybay and Indybay's Internet service provider, threatening to obtain a search warrant for the IP addresses of the contributors who published these articles to Indybay's newswire. However, Indybay does not log the IP address of website visitors, as stated in the privacy policy.

On May 2, nine Sullivan Management Company properties were similarly targeted, following a May Day direct action that, at least temporarily, reclaimed a long-vacant SMC property which was lost to foreclosure in 2011. SMC is owned by corporate landlord and real estate speculator Neill Sullivan.

A fourth communiqué claims credit for breaking into an Oakland police vehicle lockup at 10th and Union Streets on May 7, damaging cruisers with muriatic acid, flattening tires, and smashing windows.