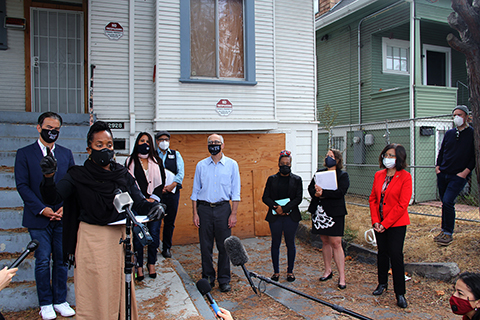 Two unsheltered mothers working with ACCE Action reclaimed possession of a vacant investor-owned property in West Oakland on November 18, 2019. They made it a home for themselves and their children, but it wasn't an easy go. Following legal and public relations battles with real estate speculator Wedgewood LLC and the courts to remain, and despite multiple community solidarity home defense actions, the Alameda County Sheriff's Office arrived heavily armed before dawn on January 14 and evicted the moms.

After nearly a year of struggle, Moms for Housing announced on October 9 that their house on Magnolia Street in West Oakland had been purchased by the Oakland Community Land Trust and will never again sit empty for the sole purpose of increasing the profits of real estate speculators. Moms4Housing co-founder Dominique Walker declared, "This is officially Moms' House."

In November, Dominique Walker and her allies running as the "Right to Housing" slate were elected to the Berkeley rent board. Weeks later, ACCE Director and Moms4Housing co-founder Carroll Fife claimed victory as the councilmember-elect for Oakland's third district.