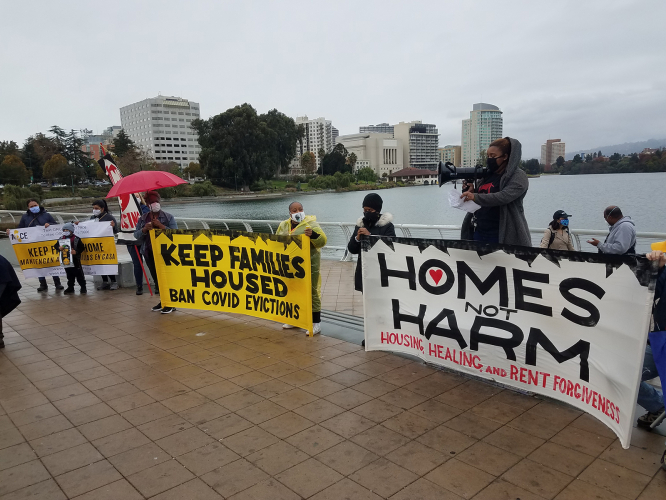 original image (1600x1200)
[Before marching to the courthouse, Alia Thurman, pictured here, and others spoke to supporters at the Lake Merritt amphitheater.]


Following up on other big news — the announcement that Moms' House was secured as a permanent community asset, the election to the Berkeley rent board of Moms4Housing co-founder Dominique Walker and her allies running as the "Right to Housing" slate, and Moms4Housing co-founder Carroll Fife claiming victory as the councilmember-elect for Oakland's third district — on November 17, the moms challenged the notorious housing auctions normally carried out on the Alameda County courthouse steps.

On this rainy day, no auctions of foreclosed homes were held on the steps of the courthouse, but every week, this is where Alameda County housing trickles up from financially-distressed families to real estate speculators. After marching from an opening rally at the Lake Merritt amphitheater and seeing no signs of an auction, Rebecca Ruiz commented that either they are afraid of the moms or Mother Nature is on our side.

Tuesdays and Thursdays are auction days on the Alameda County courthouse steps. Foreclosed homes taken from Oaklanders and other Alameda County residents become the property of whomever places the highest bid. Beyond the heartless taking of people's homes, these auctions generally operate with little oversight and have been known for corrupt practices such as bid rigging.

At the Lake Merritt amphitheater, Dominique Walker says that the moms set out to highlight homelessness, real estate speculation, the new face of homelessness, and the self-determination of mothers doing whatever is necessary to protect themselves and their children. The moms fight for those who still don't have shelter and those who are about to lose their shelter through evictions and foreclosures. They will not stop fighting until housing is a human right. And she announces the plan to disrupt the auction on the courthouse steps.

Rebecca Ruiz wants us to look back on this time in disbelief that we lived in a barbaric system where housing was a commodity and we criminalized people for trying to get their basic needs met. Evictions are a matter of life and death. Black and Brown women face multiple crises: financial, pandemic, and housing. The struggle is just as much about disinvesting in militarized policing as it is about investing in housing, because gentrification and law enforcement have always been tied together.

Soon-to-be council member Carroll Fife says her election was a direct statement on what people want to see in Oakland. Her primary platform areas were divesting from OPD and investing in housing for all, and she won. The moms accomplished what many said was impossible to force a speculator to turn over housing to community control. Not everything went as planned, but they never imagined the moms would be heard around the world. Carroll says we have to keep up the pressure and emphasizes that she cannot do it alone. Some call her divisive but we don't wake up and want to fight. We just want a basic decent living. We want to be safe and secure, and have the access so many others already enjoy. But if we don't fight, we become complicit in our own oppression.

Carroll says she is coming is with research, data-based solutions on where to get the money and change the city's priorities. We lose our humanity when we allow these conditions to exist. Carroll says doesn't want to hurry her speech and get everyone out of the rain. She wants everyone there to feel the elements, because those in attendance have coats and umbrellas, but many of those living in the streets lack basic necessities. We can go and turn on the heat somewhere, but there are thousands of people who cannot do that. It should rip our hearts from our bodies that there are babies living in this. Those coping with substance abuse and mental health conditions deserve compassion as well. On January 4, Carroll will be sworn in to the Oakland city council, walking into a system intent on breaking her, and she needs everyone to reach out and make our voices heard.

Carroll reiterates her commitment to make housing a human right, not just something we chant or put on posters. "I'm going to open up the doors to all of ya'll. This is our house. That's our house. And we are going to make sure that everyone has a house. Everyone."

Nino Parker, a long-time advocate for unhoused persons and a street survivor himself, points out that a new homeless commission was seated in Oakland with no homeless people on it. We don't have any stakeholders in the game. He demands that the city's eviction team stop shipping Black men out of Oakland. If you were born and raised in Oakland, you should have the right to be housed in Oakland, not Antioch, not Stockton.

During an encampment eviction at Lake Merritt last year, Nino told the story of an unhoused elderly couple who were shipped from the Henry J Kaiser auditorium tuff sheds to Stockton that summer. The couple returned to Oakland rather than live in substandard housing in a strange city. They ended up on streets again, then were taken back into the sheds.

Turha Ak says he speaks to organize, not for cheers or personal acknowledgement. The best protection we have is a disciplined, coordinated, organized mass. We are about to enter a phase that could potentially be more difficult than the phase before. Don't let victory impede our ability to win. Libby Schaaf and her surrogates campaigned against Carroll Fife by lobbying the Democratic establishment for them not to endorse Carroll. The campaign fight was not against incumbent Lynette McElhaney, it was against the Libby Schaaf and Jerry Brown gentrification machine. Our greatest pain was having to go against another Black woman. When we defeat a surrogate, it is not defeating the machine.

The machine is backed into a corner now because we fucked him up, Turha continues. These folks fight against us because we are fucking them up. We are winning the fight, but when an animal gets backed into a corner, particularly a predatory animal, they fight harder. We are entering a phase of the fight where it is about to get ugly and more vicious. Carroll Fife represents the hopes of the people, and you can bet that their objective is to separate her from the people. We have to organize because if we don't, they will discredit and dismantle this movement. They are going to put money into every sector of opposition, from the streets to conservative Democratic dynamics, people who advocate for the same things but do it on behalf of the state to be obstructionists.

"We are unstoppable, another world is possible." 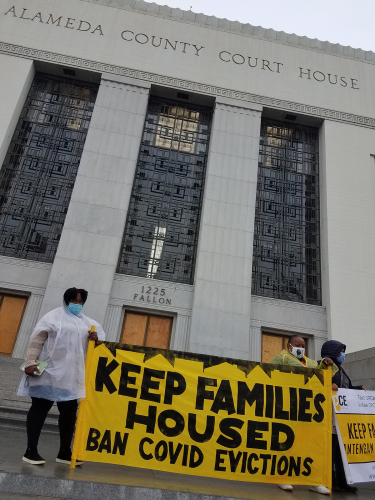 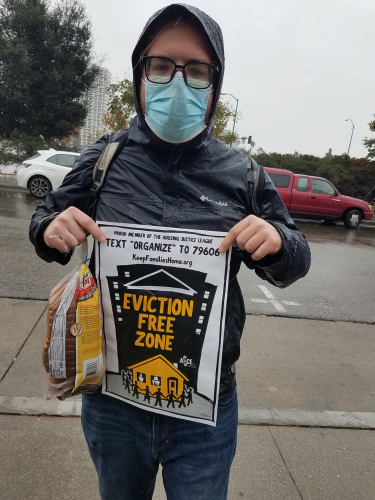 original image (1200x1600)
Text "Organize" to 79606
http://www.KeepFamiliesHome.org
Add Your Comments
Support Independent Media
We are 100% volunteer and depend on your participation to sustain our efforts!