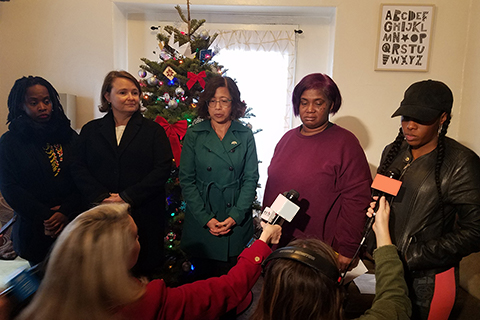 On November 18, unsheltered mothers claimed possession of a vacant investor-owned property in West Oakland. They called themselves "Moms for Housing" and immediately set about making the long-neglected house a home. Moms for Housing and supportive allies cleaned the property inside and out, performed overdue maintenance and repairs, and filled it with furniture and modern appliances.

After receiving an eviction notice from the house-flipping company Wedgewood LLC on December 3, Moms for Housing declared that they intended to remain in their new home and petitioned the courts to allow them to stay. “I claim right to possession of this home because housing is a human right,” Dominique Walker wrote in a legal filing in Alameda County Superior Court, in an attempt to avoid being evicted on December 17. On December 16, they were able to temporarily block the eviction. At the latest hearing on December 30, the judge did not issue a ruling, but might any day. The moms are calling for a strong showing of solidarity at the house should another eviction order go into effect.

Separately, on Christmas Eve, Moms for Housing held a press conference in their living room to push back against a public relations ploy by Wedgewood — using affiliated Los Angeles nonprofit Shelter 37 to soften the company's image as it attempts to evict the moms. Three Oakland councilmembers expressed support for the moms in their effort to purchase the house with the backing of the Oakland Community Land Trust.

Community Allies Ready to Stand in Defense of Moms' House |

Energetic Solidarity with the Moms 4 Housing the Day After Christmas |

Sign the petition: Stop the Eviction of Moms 4 Housing! |