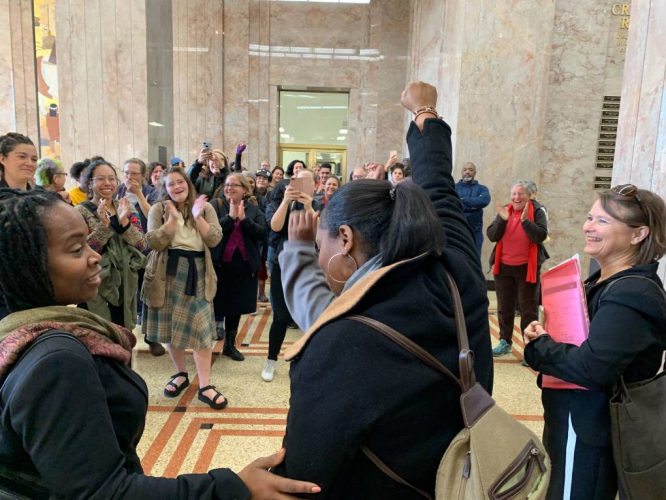 original image (1020x765)
[Moms4Housing and supporters celebrate December 16 at Alameda County Superior Court after a judge temporarily stopped the eviction from the West Oakland home where the mothers and children have been living for the past month. Photo courtesy Molly Solomon/KQED.]


The women are refusing to move, calling attention to vacant, investor-owned homes in Oakland that could be used to house the homeless.

At a court hearing December 16, they temporarily delayed the eviction, which was expected to take place this week. They are scheduled to return to court Monday, Dec. 30 to argue why they should be allowed to stay in the house. [UPDATE: court date was moved forward to Dec 26.]

The property is owned by Wedgewood, a Southern California real estate investment company that does business throughout the Western U.S. and Florida, describing itself as a “leading acquirer of distressed residential real estate.”

Speaking at a community meeting at Oakland’s Taylor Memorial Methodist Church Tuesday evening, parent Dominique Walker said, “We moved in and (are) now keeping up the house.”

Moms 4 Housing has done nothing illegal, she said. “There (are) four vacant homes for every one homeless person on the streets in Oakland; that’s criminal to me during winter,” said Walker, quoted in a report on ABC Channel 7.

“Housing should not be commodified,” said Carroll Fife, director of Alliance of Californians for Community Empowerment (ACCE), quoted in KQED News.

“What you need to exist should not be sold to the highest bidder,” she said.

“There’s a real simple bottom line, which is you can’t steal people’s property,” said Singer, quoted in the Marin Independent Journal. “The home belongs to Wedgewood and the many people who invest in Wedgewood. And the women took this house — stole this house — and have no right to it.”

Wedgewood bought the house at a foreclosure sale in July for $501,000 and plans to renovate the property and put it back on the market, Singer said, according to the newspaper. The company went through a formal eviction process with the former occupant, which ended last month.

Singer, whose company is based in the Bay Area, represents many Fortune 500 companies. He successfully represented Chevron Corporation in 2014 in a multi-billion dollar environmental contamination lawsuit brought against the oil company by indigenous Amazonian communities in Ecuador.
https://postnewsgroup.com/2019/12/19/moms-...
Add Your Comments
Support Independent Media
We are 100% volunteer and depend on your participation to sustain our efforts!