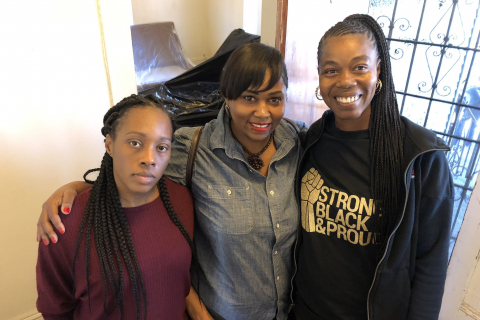 Kicking off an East Bay Housing Justice Week of Action organized by ACCE Action and allies, two unsheltered mothers reclaimed possession of a vacant investor-owned property in West Oakland on November 18. The mothers, Dominique Walker and Sameerah Karim, are the founding members of Moms for Housing, created to address the extreme challenges working mothers face in finding safe and affordable housing for themselves and their children. The two mothers announced their intention to remain in the home until it is returned to the Oakland community. Their supporters have surrounded the residence, and say they will remain in place until the transfer of the home to community control has been negotiated.

The home was foreclosed upon and then purchased by Wedgewood Properties, a self-described “leading acquirer of distressed residential real estate” which also “manages bulk quantities of non-performing and re‑performing residential whole loans purchased from banks.” Moms for Housing said that Wedgewood has kept the three bedroom one bath renovated property vacant since 2017.

“This home was stolen from the Black community in the subprime mortgage crisis, and it’s been sitting vacant for nearly years,” said Mom for Housing co-founder Dominique Walker. Co-founder Sameerah Karim asks: “Why should anyone — especially children — sleep on the street while perfectly good homes sit empty?”

March For Housing Now — Our City, Not Scarcity!