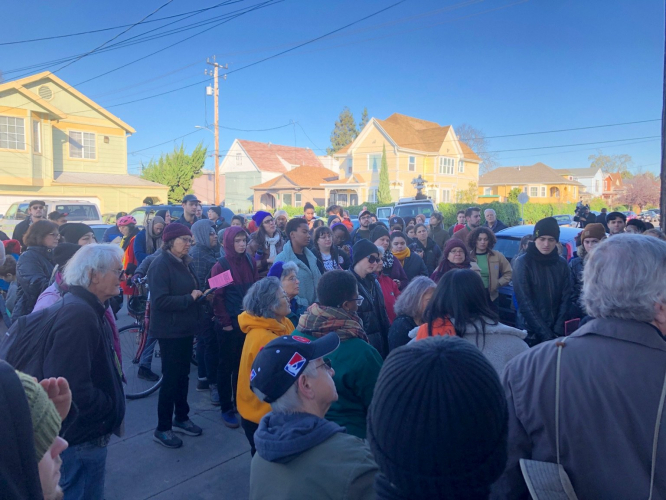 
On November 18, unsheltered Oakland mothers claimed possession of a vacant investor-owned property in West Oakland. They called themselves "Moms for Housing" and immediately set about making the long-neglected house a home. Along with the support of allies, the property was cleaned inside and out, overdue maintenance and repairs were handled, and it was filled with furniture and modern appliances.

After receiving an eviction notice from the house-flipping company Wedgewood of Redondo Beach in Southern California on December 3, Moms for Housing declared that they intended to remain in their new home and petitioned the courts to allow them to stay.

“I claim right to possession of this home because housing is a human right,” Dominique Walker wrote in a legal filing in Alameda County Superior Court, in an attempt to avoid being evicted on December 17.

On December 16, they were able to temporarily block the eviction and a hearing date was set for December 30. Oddly, that date was then pushed forward to December 26, the day after Christmas.

It is anticipated that if the mom's lose in court, which remains a very real possibility, Alameda County Sheriff's deputies might immediately be dispatched to forcibly evict the mothers — and word went out that home defense was needed.

Hundreds turned up in support of the moms at both locations.

At the Hayward Hall of Justice, the hearing was rescheduled back to Monday, December 30, when housing defense and court support will again be needed.