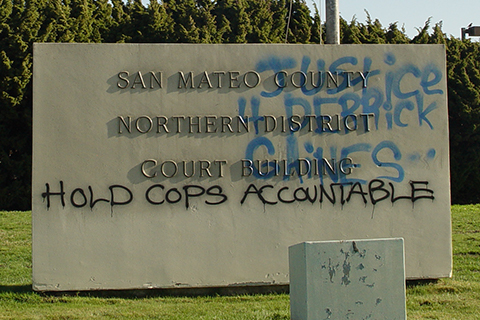 Following a protest march that attacked the Vacaville City Hall and police station on the night of January 17, dozens of anti-racists attacked the US Citizenship and Immigration Services headquarters in San Francisco the following night.

An "anonymous autonomist" writes: On January 19, on Ramaytush Ohlone land occupied under the name "South San Francisco", the county courthouse was vandalized with anti-police, anti-State, anti-colonization slogans and the windows of the front entrance were smashed in.

Comrades have continued the barrage of attacks to this government's human bondage infrastructure. Inspired by successful attacks in Vacaville and San Francisco, a group of individuals successfully attacked the county courthouse. The face was used as a canvas for political slogans, and the glass of the front entrance was entirely shattered.