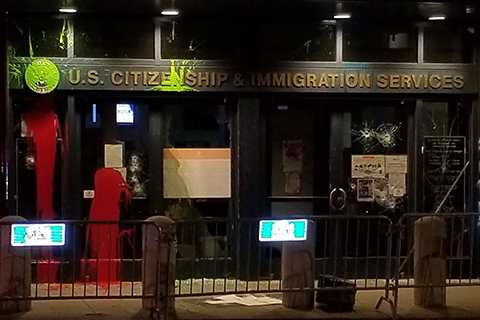 An anonymous communiqué reads: On January 18, as strong winds raged, 30+ anti-racists attacked the Immigration and Customs Enforcement office in San Francisco. We thoroughly painted the walls, smashed the windows, and breached the building to wreak havoc inside. We did this to initiate what will hopefully be the first in a series of breaks into and out of prisons and detention centers throughout the country. Like the tremors presaging last summer's uprising, we are responding to a generalized call to liberate all those locked within the modern plantation system....

We join all prisoners and ICE detainees who continue to fight by way of hunger strikes, escapes, and riots against repression and neglect from the State. We see you, we hear you, until every prison door and border wall is open. Solidarity means attack!