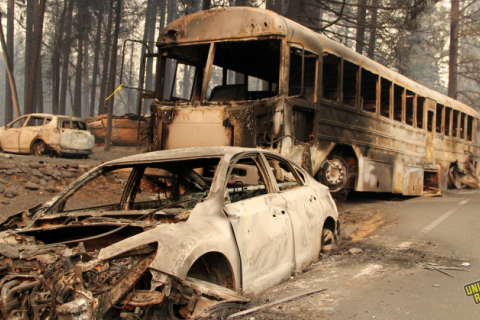 The isolated mountain town of Paradise, California, approximately 15 miles from Chico, is now in smoldering ruins, with thousands of homes, businesses and vehicles destroyed. The nearby community of Concow was also similarly destroyed. Eighty-eight people who did not survive the smoke and fire have been found thus far. The number of lives lost is expected to rise as more structures and vehicles are searched. Many of the remains are discovered in cars along escape routes. Because of the high intensity of the fire, most are unidentifiable. Hundreds of people remain missing; the fire is almost completely contained.

The cause of the Camp Fire is under investigation. Fire department radio transmissions suggest that the utility monopoly Pacific Gas and Electric could be to blame. PG&E has a history of negligence leading to deaths. In 2010 a massive gas explosion in a suburban neighborhood in San Bruno, California killed eight people. The utility company may be able to defray the cost of its negligence by up-charging consumers, meaning the public may end up paying for PG&E's negligence.

In Southern California, the Woolsey Fire has reached 100% containment, but killed at least three people, destroyed hundreds of structures, and consumed nearly 100,000 acres. The massive Woolsey Fire started on the grounds of Santa Susana Field Laboratory (SSFL/Rocketdyne), the site of a partial nuclear meltdown in 1959, and area residents are concerned about the spread of contaminates. Southern California Edison is being investigated by state regulators for its possible role.

As the state burned, California anxiously awaited the first winter rains, seeking reprieve from the notoriously destructive "fire season" of 2018. With heavy rains finally beginning on November 21, the Camp Fire, Woolsey, and other wildfires are now either mostly contained or fully extinguished, and the hazardous air quality the fires created throughout the state has been cleared.

Public Risks from the Woolsey Fire and the Santa Susana Field Laboratory: A Letter to DTSC | Down In Smoke SF |

Camp Fire: Hundreds Missing in Most Deadly and Destructive Wildfire in California History |