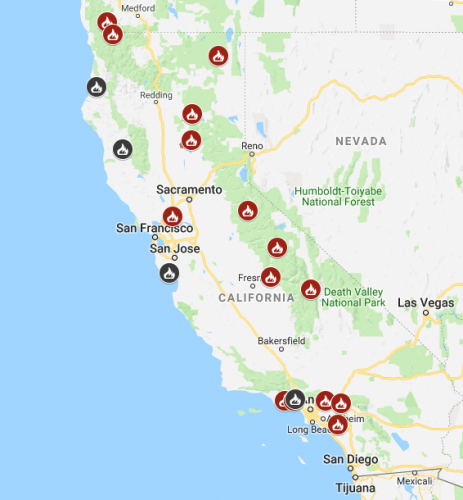 
Prisoners are paid $2 a day, and $1 an hour when fighting an active fire. The CDCR touts that the program saves the state between $90 and $100 million a year. Not surprising that free labor saves California money. And the state is increasingly relying on prisoners during fire season. (Interview with incarcerated firefighter.)

Thousands of California inmates not only risk their lives to fight fires but for their very own freedom. In addition to the pittance they are paid, firefighters earn time off of their sentences. Anyone doubting the dangers prisoners face in order to have their time behind bars reduced should know that, in 2017, two inmates died in the line of duty, along with one civilian wildland-firefighter.

Firefighting prisoners live in "conservation camps." The CDCR, in cooperation with the California Department of Forestry and Fire Protection (CAL FIRE) and the Los Angeles County Fire Department (LAC FIRE), jointly operates 44 conservation camps, commonly known as fire camps, located in 27 counties. Overall, there are around 3,700 inmates working at fire camps currently. Approximately 2,600 of those are fire line-qualified inmates.

Should these inmates seek work as a professional (paid) firefighter after release, they are denied the opportunity due to their criminal record.


More 2018 fire coverage on Indybay:
https://www.indybay.org/newsitems/2018/11/...
Add Your Comments
Support Independent Media
We are 100% volunteer and depend on your participation to sustain our efforts!