by John Mecklin, Bulletin of the Atomic Scientis
The Los Angeles Chapter of Physicians for Social Responsibility notes that the Santa Susana Field Laboratory site is contaminated in a variety of ways: “Decades of nuclear and rocket-engine testing activity, including nuclear reactor accidents and other toxic spills and releases, have resulted in widespread contamination throughout [the lab’s] 2,850-acre facility.” 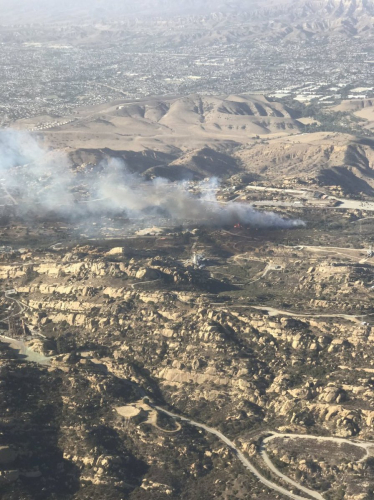 Call it another sad chapter in the long and depressing book of governmental failures to properly clean up after nuclear research and production efforts. Last week, the Woolsey Fire—one of three major, climate change-charged conflagrations now afflicting California—apparently started on the grounds of the Santa Susana Field Laboratory, located just south of Simi Valley and west of Los Angeles. Closed in 1996, the lab site was home to rocket engine and nuclear reactor research; one of the nuclear efforts—the Sodium Reactor Experiment—led to the partial melt-down of a reactor in 1959 and the release of radioactive material. But as the Los Angeles Chapter of Physicians for Social Responsibility noted, the Santa Susana site is contaminated in a variety of ways: “Decades of nuclear and rocket-engine testing activity, including nuclear reactor accidents and other toxic spills and releases, have resulted in widespread contamination throughout [the lab’s] 2,850-acre facility.”

The California Department of Toxic Substances Control (DTSC) quickly announced that it didn’t believe the fire had released significant amounts of toxins. “Our staff were able to access the site Saturday morning and assess damage caused by the fire,” a Tuesday press release said. “We confirmed that the [lab] facilities that previously handled radioactive and hazardous materials were not affected by the fire. Over the weekend our multi-agency team took measurements of radiation and hazardous compounds, both on the site and in the surrounding community. The results from this initial round of testing showed no radiation levels above background levels, and no elevated levels of hazardous compounds other than those normally present after a wildfire.”

Safecast, an international, volunteer-centered organization formed in the wake of the Fukushima Daiichi nuclear disaster, reported Wednesday that it “had no survey data from the immediate [lab] area prior to the fire, but we had a fair amount of data from nearby communities which showed it to be at normal background levels. Our real-time radiation and particulate sensors in the Southern California region, the closet of which is 30km (about 18 miles) away from [the site], have shown no measurable increases in radiation. Safecast volunteers are on the way to the site, however, so hopefully we will have new data to share soon. Though CalFire indicates that the fire danger in the [lab] area has passed, many roads are still closed, making access difficult.”

Local activists were not shy about voicing in their disbelief in governmental pronouncements about contamination and the fire. “We can’t trust anything that DTSC says,” West Hills resident Melissa Bumstead said. “DTSC repeatedly minimizes risk from [the lab] and has broken every promise it ever made about the [lab] cleanup. The public has no confidence in this troubled agency.”

Should it? The Santa Susana Field Laboratory closed 22 years ago, and cleanup efforts remain in the planning stages.

“The Woolsey Fire likely released and spread radiological and chemical contamination that was in [the Santa Susana Field Laboratory’s] soil and vegetation via smoke and ash,” said Bob Dodge, president of Physicians for Social Responsibility-Los Angeles. “All wildfire smoke can be hazardous to health, but if [the lab] had been cleaned up long ago as DTSC promised, we’d at least not have to worry about exposure to dangerous radionuclides and chemicals as well.”