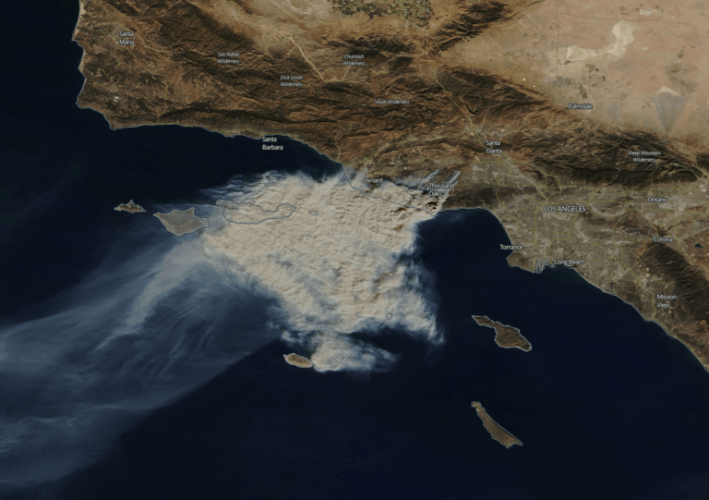 
The Woolsey fire in California began Nov. 8 near the Santa Susana Field Laboratory (SSFL), site of a partial reactor meltdown, the consequences of which have never been cleaned up. The California Department of Toxic Substances Control released a statement early Nov. 9 saying its scientists “don’t believe that the fire has caused any releases of hazardous materials that would pose a risk to people exposed to the smoke.”

The fire’s progress through to Oak Park indicates that much of the toxic site burned, according to the Los Angeles chapter of Physicians for Social Responsibility which has investigated SSFL radiation risks for 30 years.

Use of the phrase “don’t believe” [the fire caused risk] by the Dept. of Toxic Substances Control (DTSC) had to stand in for a clear denial of radiation risk because none of the site’s air monitors had yet been seen by the department. The following words of DTSC’s Nov. 9 announcement were: “There is an air monitoring network around the perimeter of the SSFL site. As soon as access is open we will evaluate the air monitoring stations.” The department seemed to be reading from a script identified by the oceanographer Jacque Cousteau who said, “…before specialists even know what has happened, they rush to the media saying, ‘There’s no danger to the public.’”

The dodgy DTSC language caused outrage and alarm among watchdog groups concerned with cleanup of the SSFL site. University of California-Los Angeles climate scientist and distinguished professor of ecology and evolutionary biology Glen MacDonald, told Democracy Now, Nov. 13: “I would want to see … some monitoring of what was kicked up.”

“We can’t trust anything that DTSC says,” said West Hills resident Melissa Bumstead, whose young daughter twice survived leukemia that Bumstead blames on the SSFL and who has mapped 50 other cases of rare pediatric cancers near the site. Bumstead organized a group called “Parents vs. SSFL” and launched a Change.org petition, now signed by over 410,000 people, demanding full cleanup of SSFL. “DTSC repeatedly minimizes risk from Santa Susana and has broken every promise it ever made about the cleanup. The public has no confidence in this troubled agency,” said Bumstead.

Bumstead told Nukewatch Nov. 13, that DTSC has a history of promoting the financial advantage of the polluters — Boeing, NASA and the Energy Department — rather than the protection of public health.”

The Physicians for Social Responsibility press advisory notes that nuclear reactor accidents, including a famous partial meltdown, tens of thousands of rocket engine tests, and sloppy environmental practices have left SSFL polluted with widespread radioactive and chemical contamination. Government-funded studies indicate increased cancers for offsite populations associated with proximity to the site. In 2010, DTSC signed agreements with the Department of Energy and NASA that committed them to clean up all detectable contamination in their operational areas by 2017. DTSC also in 2010 committed to require Boeing, which owns most of the site, to cleanup to comparable standards. But the cleanup has not yet begun, and DTSC is currently considering proposals that will leave much, if not all, of SSFL’s contamination on site permanently.

Dr. Robert Dodge, President of Physicians for Social Responsibility-Los Angeles, shares the community’s concerns. “We know what substances are on the site and how hazardous they are. We’re talking about incredibly dangerous radionuclides and toxic chemicals … These toxic materials are in SSFL’s soil and vegetation, and when it burns and becomes airborne in smoke and ash, there is real possibility of heightened exposure for area residents.”

The SSFL, 30 miles northwest of downtown Los Angeles, was burned over by the Wolsey fire which by Nov. 13 had consumed 96,000 acres or about 150 square miles.

The July 12, 1959 partial meltdown of the Sodium Reactor Experiment (SRE) was especially dangerous, because, as an experimental reactor, it was built without a “containment structure” — the large concrete and steel dome the covers most nuclear reactors. The SRE loss of control was “the third largest release of iodine-131 in the history of nuclear power,” according to Arjun Makhajani, President of the Institute for Energy & Environmental Research.

Like today’s uncontrolled dispersal of contaminants by the Wolsey wildfire, the amount of radioactive materials dispersed by the 1959 accident was never thoroughly measured. The lab’s radiation “monitors went clear off the scale,” according to an employee of Rocketdyne which operated the site. That meltdown was kept secret for 20 years until 1979.

John LaForge is a Co-director of Nukewatch, a peace and environmental justice group in Wisconsin, and edits its newsletter.

https://www.counterpunch.org/2018/11/16/wo...
Add Your Comments
Support Independent Media
We are 100% volunteer and depend on your participation to sustain our efforts!