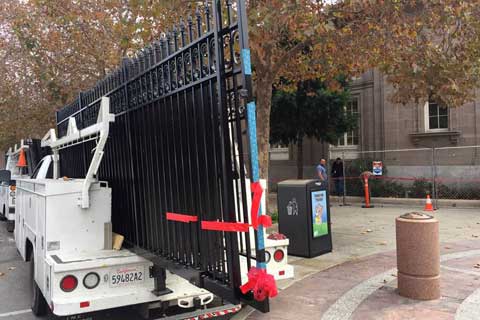 The River Street campground in Santa Cruz is slated for dispersal at the end of November, breaking promises from city staff that it would last through the winter until April. The only option the city is offering in its place is a small night-time only shelter. At the same time, massive new fences were raised around San Lorenzo Park, Grant Street Park, and the downtown post office, and restrooms remain closed to the public at Laurel Park/Louden Nelson Center. In anticipation of the River Street campground closure, homeless activists are organizing to establish a community survival campground.

Robert Norse writes: There is no legal place for folks to sleep, so they must sleep where they must. Instead of spending resources to open up spaces, even like the limited San Lorenzo campground from last year, City tightwads are putting up fences, funding whack-a-mole type operations, and endorsing the Downtown Association’s private downtown snitch program which it pompously calls Ambassadors.

These visible attacks on poor people outside are risky for authorities given the 9th Circuit Court’s latest action. All that’s needed is for a few savvy attorneys, looking to make a few bucks, file a lawsuits—as is happening in other cities. And homeless folks who have finally had enough and decide to resume sleeping together where they can and where they must. As the temperatures drop and tempers rise, these prospects become more likely. Particularly if the Community supports them.

Polling Folks Outside for November 15th |

Santa Cruz Post Office Adds Permanent Iron Fence to Keep Out Those without Housing | Is the City of Santa Cruz Adopting Trump's Program of Hate? |

If You’re Going to Santa Cruz |

Pee & Poo Protest: Reopen Essential Bathrooms for the Public and the Poor |