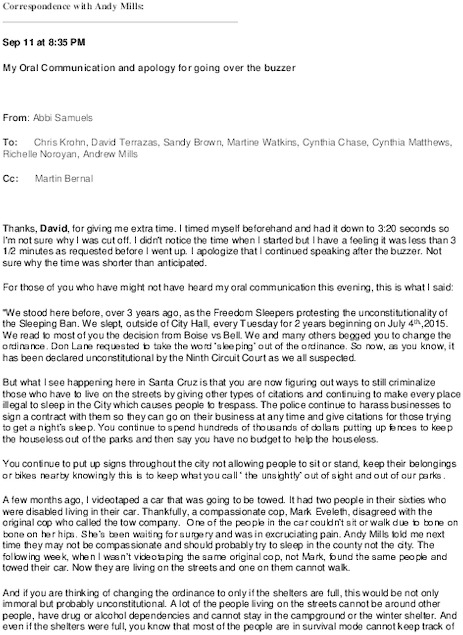 Download PDF (301.1KB)
The recent Martin v. Boise decision found the Boise Camping and Disorderly Conduct ruled that "...[J]ust as the state may not criminalize the state of being ‘homeless in public places,’ the state may not ‘criminalize conduct that is an unavoidable consequence of being homeless — namely sitting, lying, or sleeping on the streets.’
Interestingly enough, even the Police Officers Association recognized the significance of the case and summarized it: https://cpoa.org/the-eighth-amendments-prohibition-on-cruel-and-unusual-punishment-bars-city-from-prosecuting-individuals-criminally-for-sleeping-outside-on-public-property-when-no-shelter-available/

Afterward is the Norse correspondence with Mills.

ABBI'S ACCOUNT:
Last Tuesday, Abbi Samuels spoke to the City Council during Public Comment. The reason she was moved to speak was because of the ruling by our ninth circuit court stating it was unconstitutional, "cruel and unusual punishment" to criminalize someone sleeping outdoors if they have no where else to go. And was also moved to speak because the City of Santa Cruz, one of the worst places in the country for homeless services, continues to criminalize the houseless.

Abbi wrote the City Council, the City Manager and the Chief of Police. If you are interested in reading this, please note that on numerous occasions she asks the Chief of Police, Andrew Mills, where one can sleep in a public location in which the police of the City of Santa Cruz will not ticket nor wake a person sleeping outdoors. You will notice he is never able to answer that question. 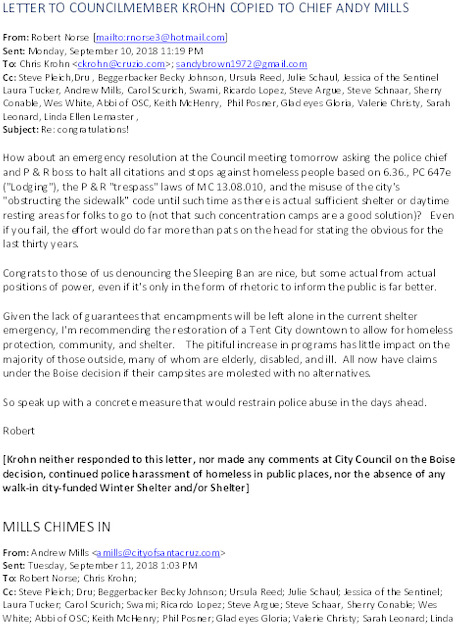 Download PDF (516.5KB)
Add Your Comments
LATEST COMMENTS ABOUT THIS ARTICLE
Listed below are the latest comments about this post.
These comments are submitted anonymously by website visitors.