Add an Event
Newswire
Calendar
Features
Home
Donate
From the Open-Publishing Calendar
From the Open-Publishing Newswire
Indybay Feature
Publish to Newswire
Add an Event
Related Categories: Santa Cruz Indymedia | Government & Elections | Health, Housing & Public Services | Police State & Prisons
Is the City of Santa Cruz Adopting Trump's Program of Hate?
by Keith McHenry
Friday Oct 19th, 2018 7:30 PM
On October 17th, Sentinel journalist, Jessica York, reported that the River Street Campground will be shut down in November, with some of its members relocated into a scaled down Winter Shelter program at the VFW Hall on 7th Avenue. The VFW site will be available to 60 people and open only during evening hours, with a first-come, first-served model that does not allow pets and has limited possession storage. 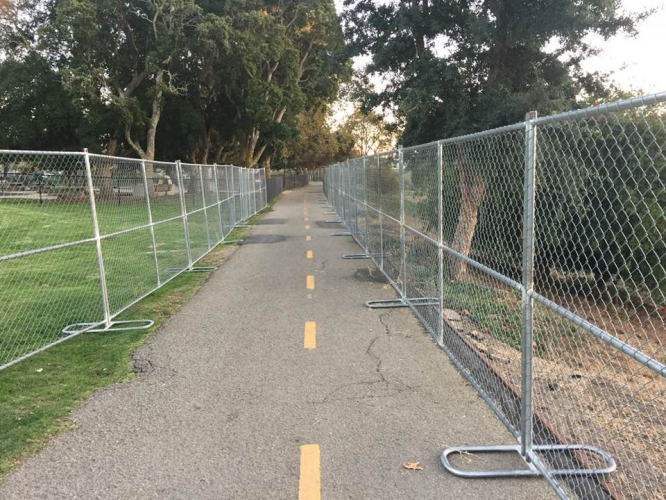 original image (960x720)
This year, the Salvation Army has agreed to up security at the VFW site to assuage neighborhood concerns, with a security guard stationed on-site, in addition to metal detection wands at the door. Both the camp and VFW site require people to be bused in, rather than allowing walk-ups.

On the same day that the Sentinel announced the closing of the River Street Campground city officials fenced off San Lorenzo and Grant Street Parks, closed its bathrooms and posted signs saying “PARK CLOSED Until further notice for - Focused Maintenance - Public Safety”. Access to the Pogonip from the River Street side has been “caged off” by the city, making conventional access to traditional homeless encampments along the creek impossible.

Private security guards were busy rousting homeless people from the area telling them to cross the river into downtown. The city has already fenced off Garfield, Star of the Sea, and Laurel Parks and is stepping up harassment of those without housing seeking a place to rest downtown.

Santa Cruz currently has no walk-in shelter with long waiting lists for programs at the Homeless Services Center. Police and rangers are also violating the Martin v. City of Boise - Ninth Circuit Court of Appeals ruling against ticketing and arresting people who have no place to sleep subjecting local homeless community members to what the court says is cruel and unusual punishment.

If you agree the city has embarked on another form of cruelty, come to our Food Not Bombs meetings with suggestions for action.

Tony Elliot Director of Parks and Recreation - 831-420-5270
Susie O'Hara, Principal Management Analyst, (831) 420-5365
https://www.facebook.com/groups/SantaCruzF...
Add Your Comments
LATEST COMMENTS ABOUT THIS ARTICLE
Listed below are the latest comments about this post.
These comments are submitted anonymously by website visitors.