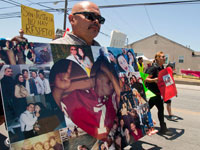 Following the SPD killing of Carlos Mejia on May 20, residents have struggled against the powers that be in Salinas. On May 25, local politicians and non-profit groups worked to quiet anti-police sentiment at the large march and statewide mobilization against police brutality held in East Salinas. On May 27, the family of Mejia filed a wrongful death legal claim against the City of Salinas, and a May 31 counter-protest was held at a pro-police rally organized by retired SPD officers and law enforcement families. Additionally, public pressure led the SPD on May 28 to release the department's policy manual on the use of deadly force.

The killing of Carlos Mejia was the third police killing by the SPD to occur in a short time span: on May 9, Osman Hernandez was shot and killed outside of the Mi Pueblo market on Alisal and Sanborn, and on March 20, Angel Ruiz was shot and killed outside of a Wingstop restaurant. All of this has been set against the larger narrative of law enforcement misconduct in Monterey County, which has been characterized by the alleged targeting of Hispanic individuals by King City Police, as well as the killing under mysterious circumstances of a man in Big Sur by a Monterey Sheriff.

Anti-Police Signs Not Allowed at Salinas March Against Police Brutality |

Discussing Salinas and Oxnard on KDVS in Davis |

Salinas on May 25 by Bruce Neuburger, Lettuce Wars

Salinas: "No Es Justo" by Lil Tony Mc (Song and Video) | Salinas Police Procedures and Killings Challenged by Citizens of Salinas | M.E.Ch.A de UCSC in Solidarity with the City of Salinas!