Add an Event
Newswire
Calendar
Features
Home
Donate
From the Open-Publishing Calendar
From the Open-Publishing Newswire
Indybay Feature
Publish to Newswire
Add an Event
Related Categories: Santa Cruz Indymedia | Police State & Prisons | Racial Justice
Direct Action Monterey Network responds to Police Shooting in Salinas
by Direct Action Monterey Network (centralcoastdirectaction [at] gmail.com)
Wednesday May 21st, 2014 5:23 PM
On Tuesday, May 20 two members of the Salinas Police Department murdered a man. This is the response by the Direct Action Monterey Network.
On Tuesday, May 20 two members of the Salinas Police Department murdered a man. No excuses from the SPD can justify their actions. Anyone who has watched the video can clearly see two armed thugs approach a man carrying garden shears and a bag. The two thugs proceed to follow and surround the man, then shoot and kill him. Why is the reality of the situation not obvious to everyone? Because the two armed thugs wore badges and uniforms. In some people’s eyes, the position of “Police Officer” allows these murderers to act with impunity. To many others, this only reinforces what we’ve already known: that cops exist in our community to harass, intimidate, and control us. And this string of police shootings in Salinas is nothing new, nor isolated. It is part of a growing trend of police violence that exists around the United States.

What’s more, if the two armed thugs had been young Latino men without badges, the Law and Order elements who defend the cop-murderers would cry out for the need for more snitching, surveillance, and policing. This is not to simply expose the hypocrisy of the cops and their allies, but to show that calls for increasing “public safety” actually put many of us at more risk. More cameras, more police on the streets, more powerful weapons and vehicles. These things only increase the chances of violent encounters between police and civilians. And the militarization of police goes hand-in-hand with an expanding prison system. Jails, prisons, and immigrant detention centers are built more frequently or they are expanded. This violence and incarceration disproportionately targets the homeless, people of color, and immigrants.

All of these processes are happening right here in the Salinas valley. From the King City car thefts, to the Monterey County Jail expansion, to these recent police murders. 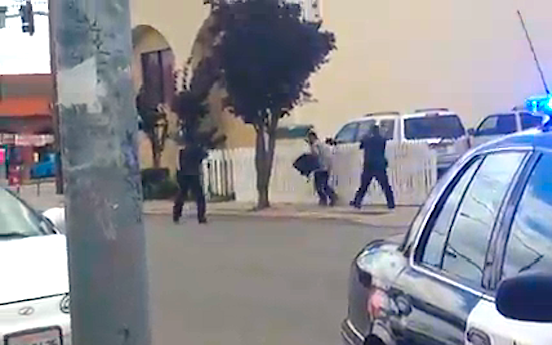 Screenshot from the video from the Salinas police shooting. May 20, 2014.
§Police killing of 44-year-old Carlos Mejia caught on video
by video here Thursday May 22nd, 2014 11:10 AM
Copy the code below to embed this movie into a web page:
Download Video (9.2MB) | Embed Video
Curtis McHenry:

Is that what YOU see in the video at one minute in???

Fucking liars!
Add Your Comments
LATEST COMMENTS ABOUT THIS ARTICLE
Listed below are the latest comments about this post.
These comments are submitted anonymously by website visitors.