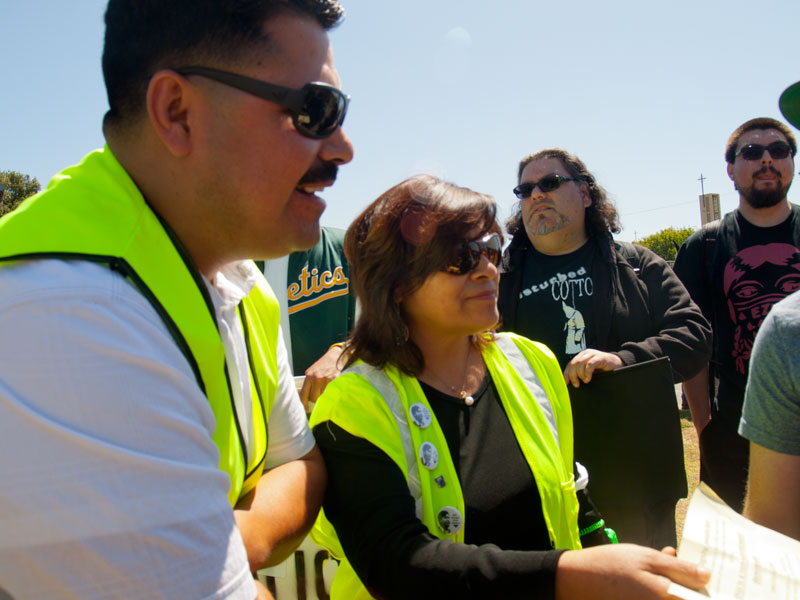 [Photo: Peace Police in Alisal (East Salinas) distribute their “Rules of Conduct” to demonstrators prior to a march against police brutality on May 25.]

Peace Police and Counterinsurgency in Salinas

On March 20, SPD killed 42-year-old Angel Francisco Ruiz outside of a Wingstop restaurant, and on May 9, SPD killed 26-year-old Osman Hernandez outside of a Mi Pueblo market. On Tuesday, May 20, police killed 44-year-old Carlos Mejia outside of Delícía’s Bakery at the corner of Del Monte and North Sanborn. Although videos show the police ruthlessly killing Mr. Mejia, Salinas Police Chief Kelly McMillin has been working to cover-up the truth of what really happened, and stated that Mr. Mejia was the aggressor and that he attacked the police.

After SPD lied to the public about Mr. Mejia being aggressive towards the police, an eyewitness video of the police killing Mr. Mejia, originally published to YouTube by 19-year-old Hartnell College student Yoanna Prieto, went viral. On Wednesday, May 21, hundreds of people rebelled in the streets of Salinas.

By May 22, Police Chief Kelly McMillin changed his tune while explaining the SPD killings of both Osman Hernandez and Carlos Mejia, and stated he has “not made any determination that either shooting was justified.”

On Tuesday, May 27, attorney John Burris announced at a press conference held at Salinas City Hall that his law firm is representing the family of Carlos Mejia. Burris said the police could have been safer in how they approached the situation, and that, “under the Constitution and under the state law of California, a police officer cannot put himself in harm’s way through negligent conduct, and then shoot himself out of it, and then expect the constitution and the laws to protect him.”

Salinas Police Chief Kelly McMillin, a 2003 graduate of the FBI National Academy in Quantico, says he is calling on the FBI for an “independent review.”

The SPD’s new FAQ page states, “because of the level of concern right now, Chief McMillin has asked for a total of three independent reviews of the police department’s investigations. In addition to the standard review by the Monterey County District Attorney, Chief McMillin has asked for an additional review by the FBI and a third one by the Civil Rights Division of the US Department of Justice.”

McMillin directs Operation Ceasefire for the Salinas Police Department, which is part of the counterinsurgency model being applied in Salinas and many other cities throughout the United States. In the excellent May 2011 essay The other side of the COIN: counterinsurgency and community policing, Kristian Williams, author of Our Enemies in Blue: Police and Power in America, explains “many contemporary counterinsurgency practices were developed by police agencies inside the U.S.” with “the transfer of theory, strategy, and technique from domestic police to the military – and back.”

McMillin is also a member of “Champions of Change: Youth Violence Prevention,” which reportedly began under President Obama’s direction in 2010 and according to whitehouse.gov “is a network of communities and federal agencies working together to share information and build local capacity.”

A petition to the Salinas Police Department, started by Cesara Chavez of Salinas, is calling for the SPD to, “End the murdering of East Salinas residents through unnecessary force and violence.” In one week, the petition received 2,500 signatures.

Anti-Police Signs Not Allowed at Salinas March Against Police Brutality

Evidence is mounting that so-called community organizers, including UFW and LULAC (unions with local and national bases), as well as a college instructor and leader at a non-profit organization, are collaborating in some form with the Salinas Police Department and other government officials to silence and distort anti-police sentiments within the community of Salinas.

At the rally and march in Salinas on May 25, yellow-vested organizers, many of them wearing UFW regalia, tried to forcefully repress anti-police expressions. In addition to coercing people into not expressing their anti-police sentiments, some organizers even disrupted an interview with Margaret Serna Bonetti, who was speaking on behalf of Carlos Mejia’s family, because Bonetti was not delivering the message the organizers wanted represented.

Organizers surrounded numerous people at the rally in Closter Park and told them that they were not allowed to display signs with anti-police messages.

A local student at Salinas High School that I spoke with at the rally had “Fuck the Law” written on her shirt. On May 27, I spoke with two people that have been working with the organizers of the march, and they witnessed a group of yellow-vested organizers surround this young student while she was with her friends, and instruct her to not display her shirt.

During the May 25 march, a demonstrator involved in Colectivo Todo Poder al Pueblo, a community-based police-accountability organization from Oxnard, was leading people in anti Salinas Police Department chanting. A woman monitoring the march while wearing a white armband and yellow backpack walked up to the demonstrator and said, “Watch your language. Watch your language, okay.” The demonstrator was not using foul language, rather he was asking the question, “How do you spell murderer?” and the people replied, “S-P-D.”

Peace Police, or so-called community organizers, donning yellow vests, were also passing out bilingual flyers during the demonstration to instruct people on how to properly, and “successfully,” protest. These rules, reprinted below, were written by “long time organizers of many successful marches.”

The protest on May 25 was a permitted demonstration in response to police killings, specifically in Salinas, however the absurd rules sprung onto people as they arrived at the rally included:

Ramiro, a friend of mine born and raised in Monterey County and very familiar with the culture and politics of community-based organizing, non-profits, labor unions, politicians, police, farmworkers, and agribusiness, explains the likely reasons why organizers did not want people to display angry or militant signs:

"Seems like the reason why organizers didn’t want people to display angry or militant signs is because they’re being led by people like Lulac or UFW, who have ties to politicians, who have ties to the Salinas Pig Dept. And so they are trying to silence the community and pacify their response to police brutality. I was there and I witnessed how in-your-face and unwelcoming some of these organizers were, especially to outsiders coming to show support. What they fail to understand is that police brutality is a big issue, and although the march was in support to Salas, it was also to protest something much bigger, not as an isolated incident, but as a phenomenon plaguing our communities. I mean, look at Albuquerque – it’s currently going through similar shit, at a much bigger scale, just like NY does, Watson, DC, Seattle does. So although it shouldn’t be a point to diminish people genuinely trying to organize in Salas, it should spark some conversation about controlling peoples’ reactions to tragedies, but more importantly, who is trying to control these reactions and why."

The other side of the COIN: counterinsurgency and community policing

This essay outlines the current counterinsurgency model, with an emphasis on its domestic application in the United States. It shows that many contemporary counterinsurgency practices were developed by police agencies inside the U.S., and illustrates the transfer of theory, strategy, and technique from domestic police to the military – and back. The essay also examines the state’s use of non- governmental or nonprofit agencies, as one element of counterinsurgency strategy, to channel and control political opposition. The conclusion briefly considers the strategic implications for social movements, especially as we learn to recognize and respond to political repression.

The following is a transcription of a flyer passed out to demonstrators by so-called community organizers, also known as Peace Police, during the rally and march in Salinas on May 25 against police brutality.

We would like to thank everyone who has chosen to support the march. As long time organizers of many successful marches, there are rules for march participants.

First, this is a non-violent and peaceful demonstration

Code of Conduct for Marchers

1. No physical violence against any person observing the march

3. No verbal or physical abuse against person of authority, meaning the captains conducting the march

4. No verbal or physical abuse against any medics, firefighters or police officers passing near the march or carrying out their duties in responding to emergencies

5. No encouragement of people passing by and speeding or burning tires

6. Do not provoke any response from people who might not agree with the march

7. Do not respond any language or provoking by people passing by or on the sidewalks

8. No use of profanity or distasteful language in poster or flags

9. Do not bring your own signs, the only signs used in the march will be those passed out by the march organizers

10. These rules are for the safety of all the community and the marchers

11. Obey the march captains at all times

Bradley Allen is a photographer, Indymedia volunteer, and website developer living in Santa Cruz, California. All content is free for non-commercial reuse, on non-commercial websites (So Not On Facebook). For other use, please contact me. Photo credit and a link to this article is appreciated. Support local independent media.

http://bradleyallen.net/
§“Rules of Conduct” for Marching Against Police Brutality
by Bradley Allen Thursday May 29th, 2014 10:15 AM 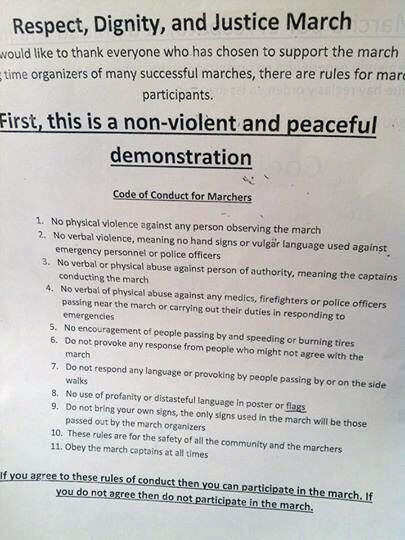