Add an Event
Newswire
Calendar
Features
Home
Donate
From the Open-Publishing Calendar
From the Open-Publishing Newswire
Indybay Feature
Publish to Newswire
Add an Event
Related Categories: California | Santa Cruz Indymedia | Police State & Prisons | Racial Justice
Anti-Police Signs Not Allowed at Salinas March Against Police Brutality
by Bradley Allen (bradley [at] bradleyallen.net)
Monday May 26th, 2014 6:24 AM
Tensions are high in Salinas, an overwhelmingly Latino community on the central coast of California with a large number of farmworkers, where a demonstration was held on Sunday, May 25. Organizers reframed the ‘March Against Salinas Police Brutality‘ into a ‘March for Respect, Dignity and Justice,’ and worked extremely hard trying to control the entire messaging. For example, a woman living in Prunedale arrived at the pre-march rally in Closter Park in Alisal (East Salinas) with a small cardboard sign reading, “#FTP.” She was quickly approached by yellow-vested organizers and told she was not allowed to display her modest sign because it was not inline with the message and guidelines desired by the organizers. 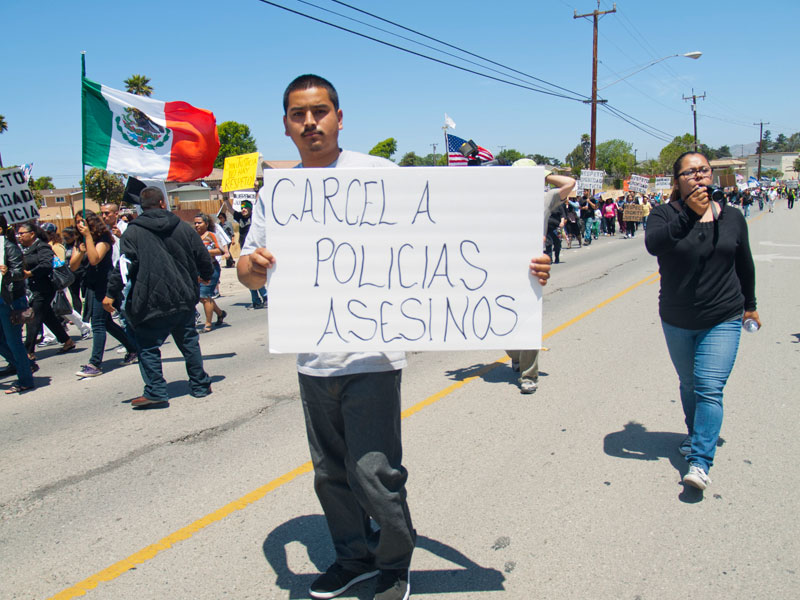 The May 25 demonstration was called in response to the Salinas Police Department killing three people within the last three months. On Tuesday, May 20, officers shot and killed 44-year-old Carlos Mejia outside of a bakery at the corner of Del Monte and North Sanborn. They said he posed a threat because he was carrying garden shears and lunged at police, however videos taken from multiple perspectives do not show Mejia lunging, rather he was moving away from the officers. The killing of Mejia was preceded by the SPD killing of Osman Hernandez at Mi Pueblo market on May 9, and Angel Ruiz on March 20. Ruiz was shot by three Salinas Police Officers simultaneously in a Wing Stop parking lot. A video of the Carlos Mejia killing went viral, and on Wednesday, May 21 hundreds of people took to the streets of Salinas.

In “Notes from the Street and Struggle in Salinas,” Josh Baltimore reports, “Thursday afternoon, two groups on opposite sides of North Sanborn. ‘Amor y paz’ demonstration in front of the Breadbox Recreation Center did not allow people from the anti police violence protest to join them because their message was ‘too violent.’ One person was turned away because her sign read ‘We Want Justice.’ LULAC (League of United Latin-American Citizens), UFW (United Farm Workers) and MILPA (Motivating Individual Leadership for Public Advancement) have been working with ‘government officials’ to spread a message of ‘peace’ and an end to violence. Counterinsurgency is in full effect.”

Shortly after preventing the woman from Prunedale from carrying her “#FTP” sign, yellow-vested organizers of the May 25 demonstration surrounded Mario Buda, a Bay Area resident holding a sign with “FTP” in red spray-paint, and insisted that he not carry his personalized sign. Buda respectfully listened to the desires of the organizers, but declined to put his sign down. Several of the yellow-vested organizers stepped closer to Buda, taunted him, and again demanded he not carry his sign because it would offend the police and be the wrong message for the media.

As people began to support Buda, the yellow jackets took a few steps back, but others quickly stepped up. One member of the peace police, likely a high ranking official since she was wearing three César Chávez buttons on her yellow vest, insisted on handing someone her flyer with guidelines for the demonstration. An elder gentleman expressed support for Buda and declared, “The world has gotten heart from Salinas standing up, and we need to do that more.”

I asked Buda why he carried the sign and he replied, “to express my outrage about cops murdering people.” Buda was repeatedly harassed by organizers during the rally, however he carried his sign throughout the demonstration.

I spoke with Margaret Serna Bonetti who was speaking on behalf of Carlos Mejia’s family. Bonetti said that Mr. Mejia had been very traumatized before he was killed by Salinas Police Officers on May 20. Mr. Mejia was from El Salvador, where most of his family still is, and had lost his mother within the past six months.

After I spoke with Bonetti, reporters for FOX and CBS immediately began interviewing her. Bonetti was saying that the Mejia family would be holding a press conference on Tuesday, May 27, 12 PM, at Salinas City Hall, and then a service at Saint Mary's Church the following day, May 28 (more details to follow). In the midst of being interviewed by FOX and CBS reporters, several yellow-vested organizers interrupted Bonetti and stated that she was not delivering the message the organizers wanted represented.

Prior to the march, a woman read a list a demands through a megaphone from inside the gazebo in Closter Park. The demands are: 1) Investigate all police killings in Salinas going back 10 years. 2) Fire Salinas Police Chief Kelly McMillin. 3) Arrest all the killer cops in Salinas. 4) Form a Citizen’s Police Review Board for Salinas.

Although organizers of the march tried hard, they were not able to prevent all participants from displaying or vocalizing anti-police sentiments. Manuel Quintero, born and raised in Salinas, carried a sign stating “Sin Justicia No Hay Respeto (Without Justice There Is No Respect).” Quintero said he was at the demonstration because it was very unjust how the Police killed Carlos Mejia. “There was a better way to stop him. They did not need to kill him.”

Bradley Allen is a photographer, Indymedia volunteer, and website developer living in Santa Cruz, California. All photos are free for non-commercial reuse, on non-commercial websites (So Not On Facebook). For other use, please contact me. Photo credit and a link to this article is appreciated. Support local independent media. 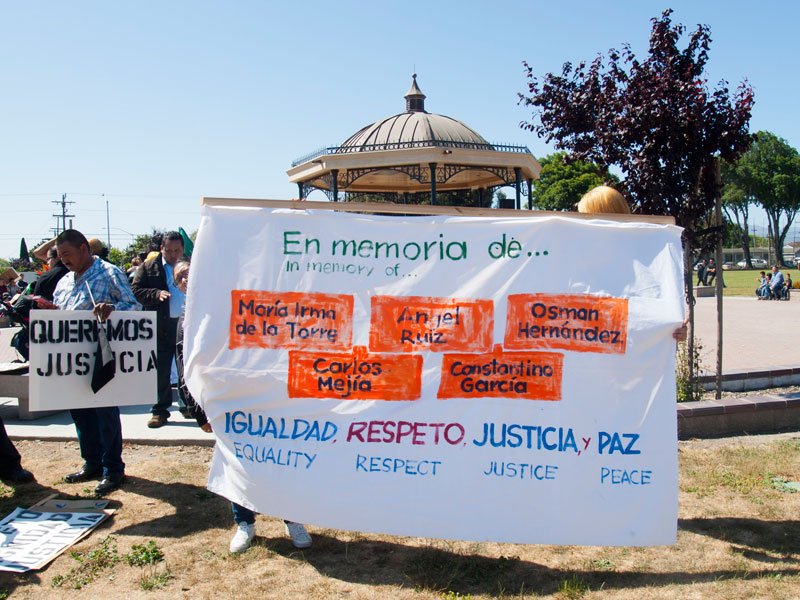 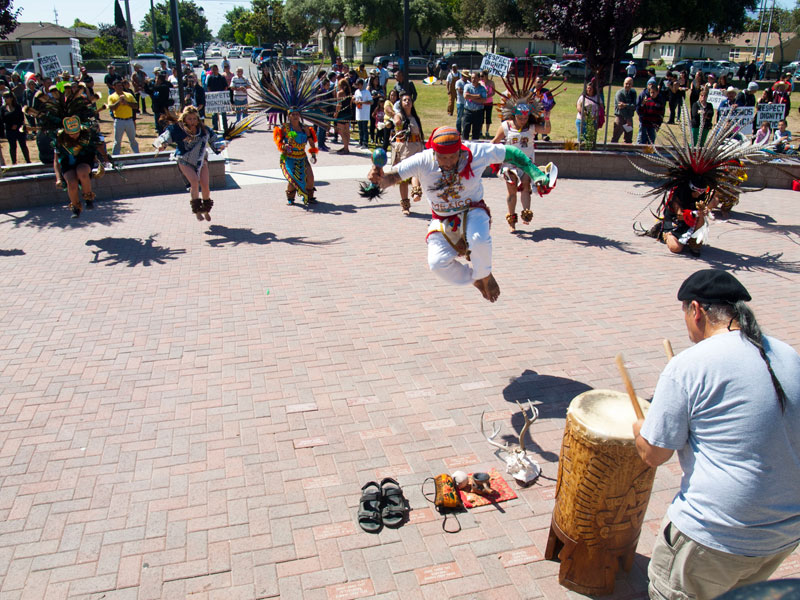 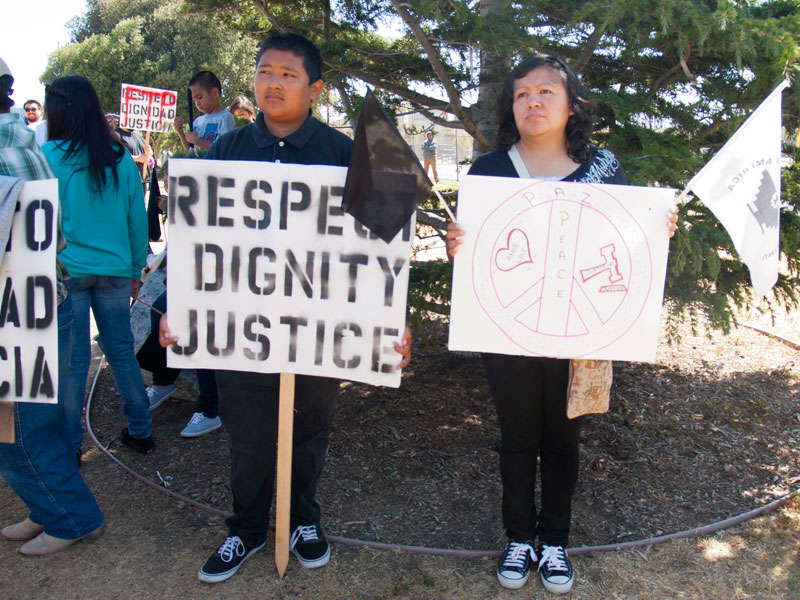 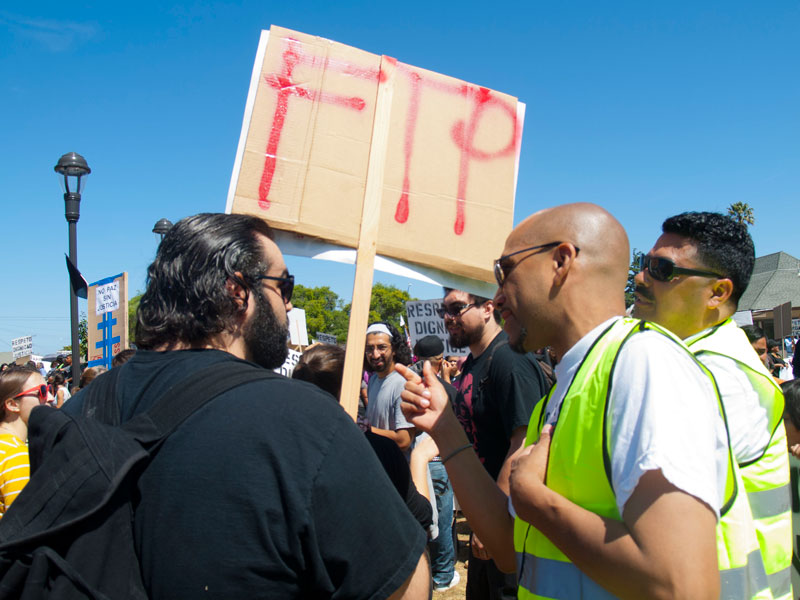 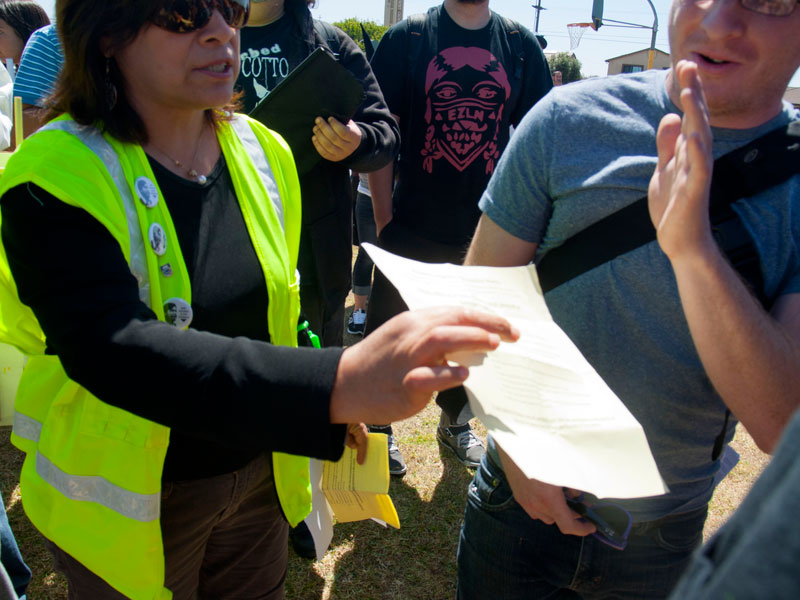 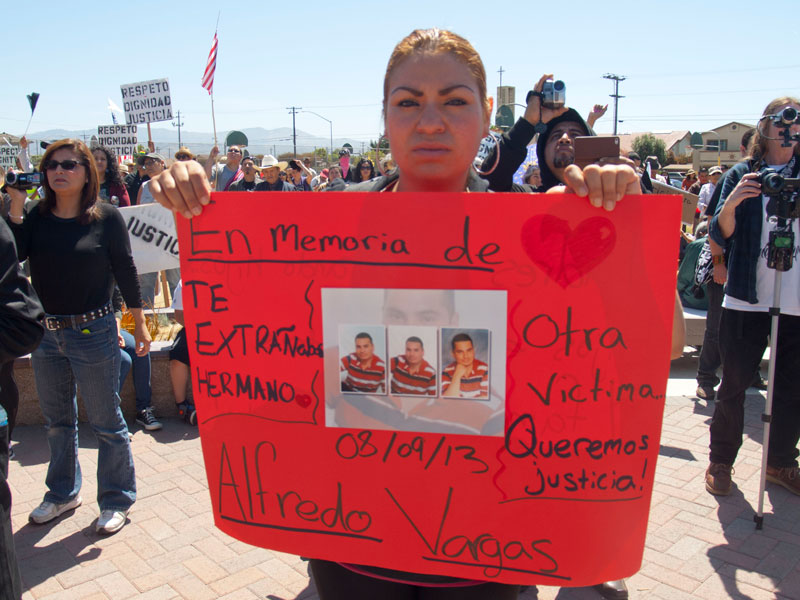 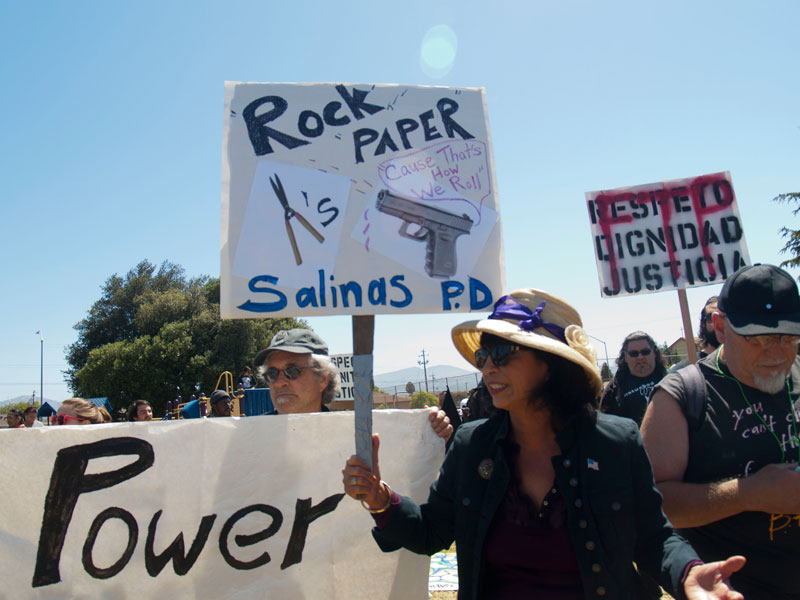 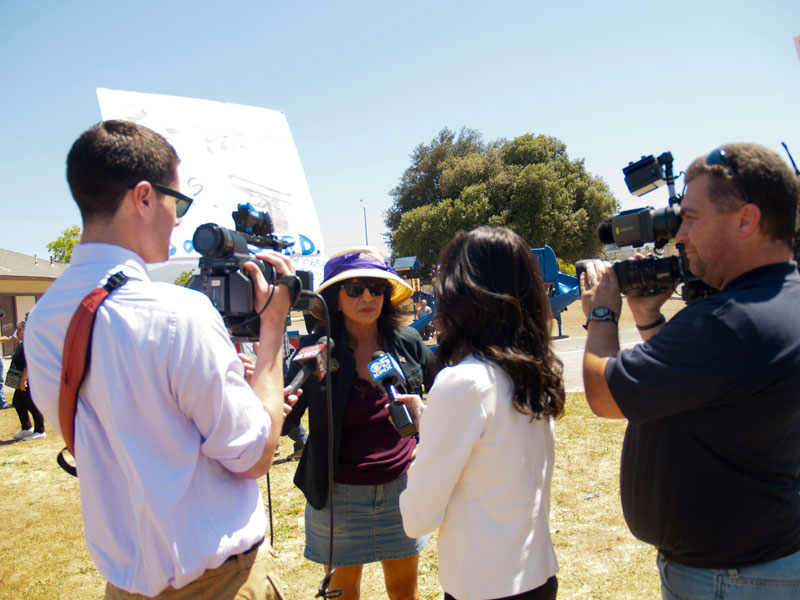 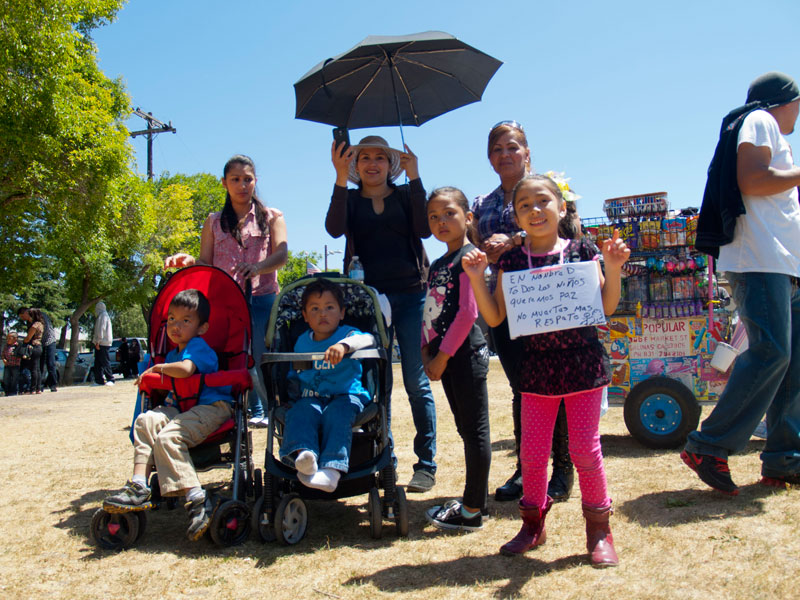 En nombre de todos los niños queremos paz. No muertas, más respeto. In the name of all the children we want peace. No killings, more respect. 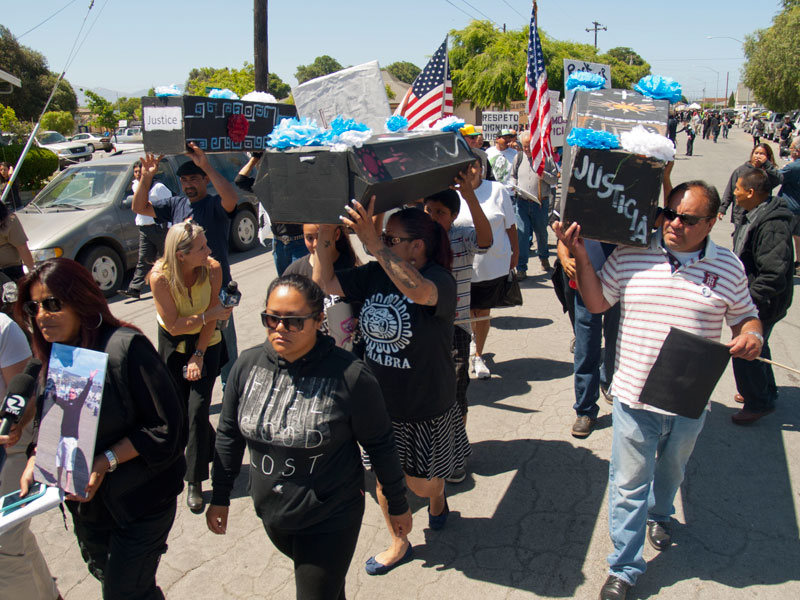 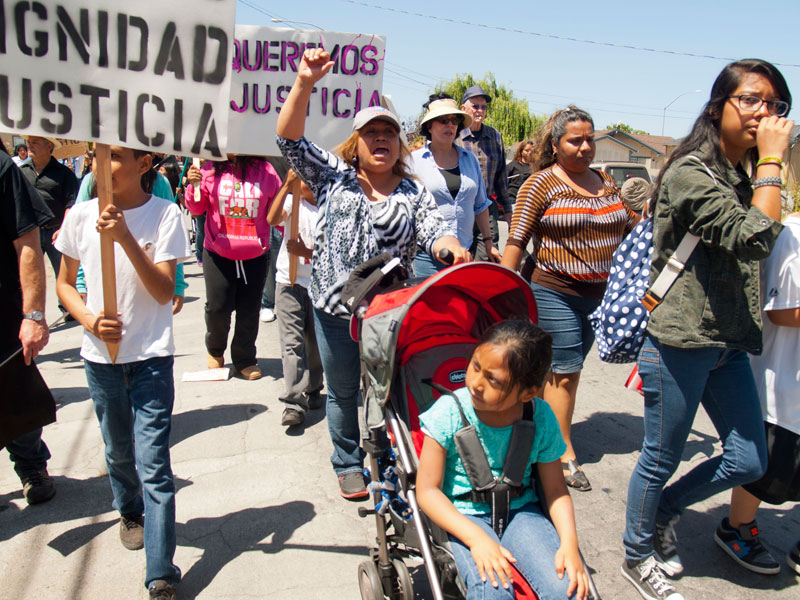 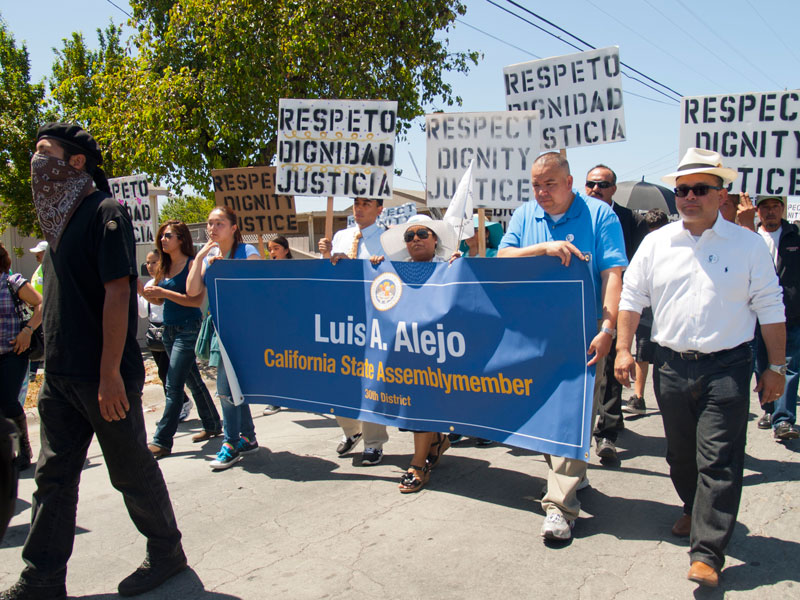 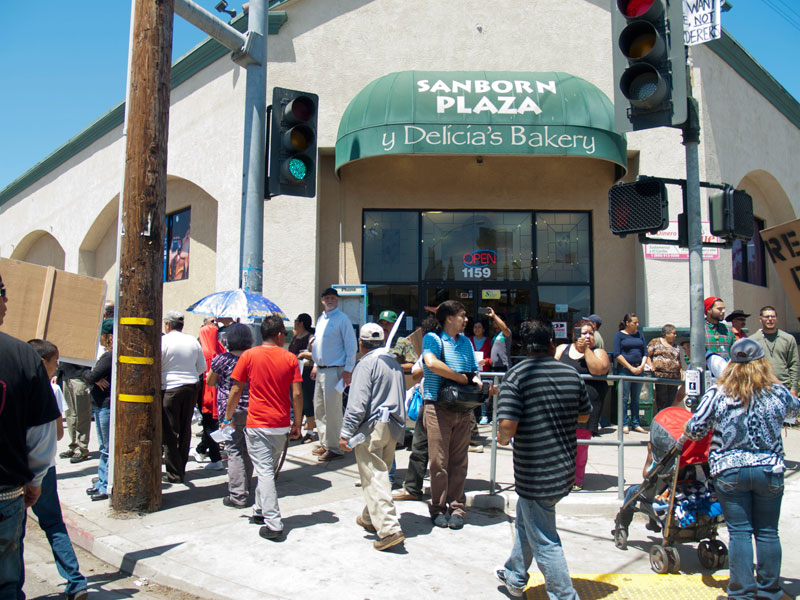 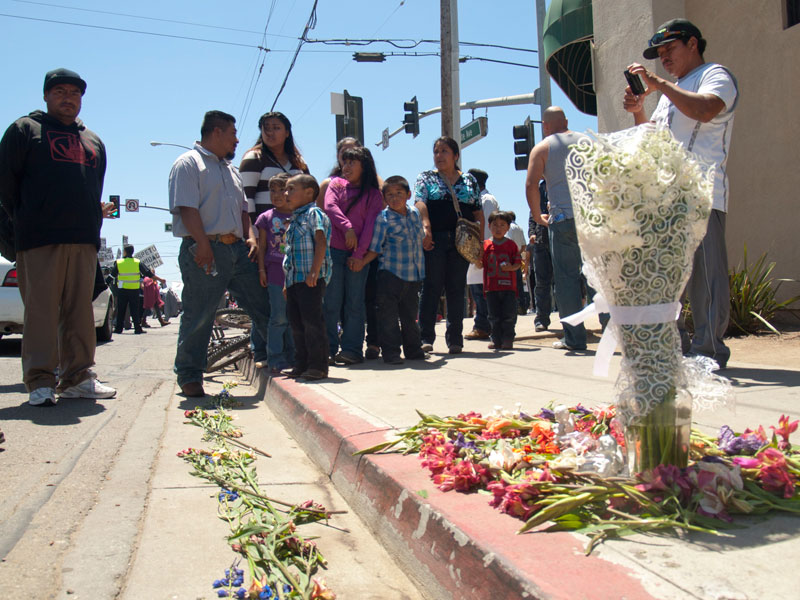 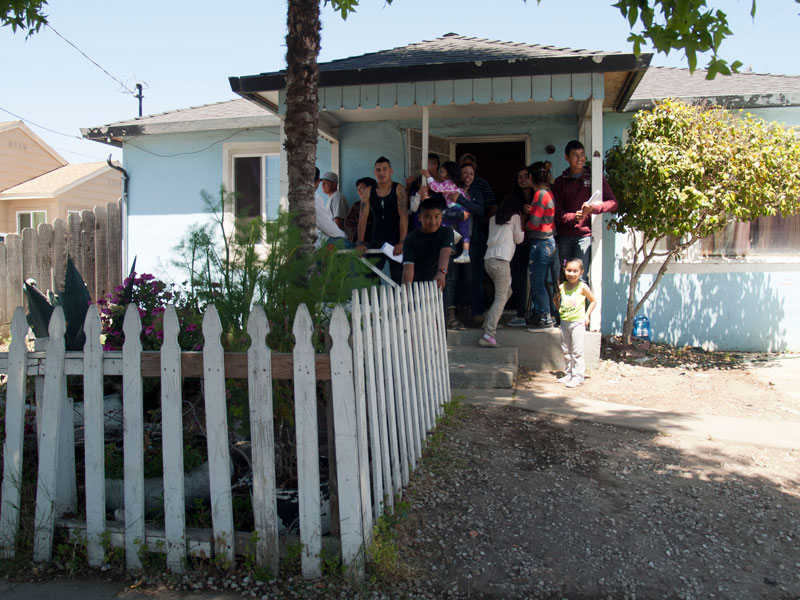 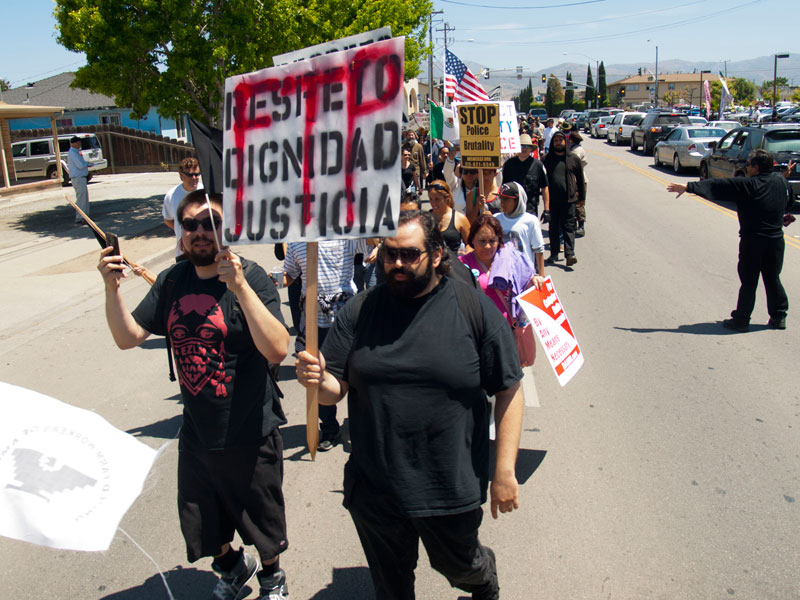 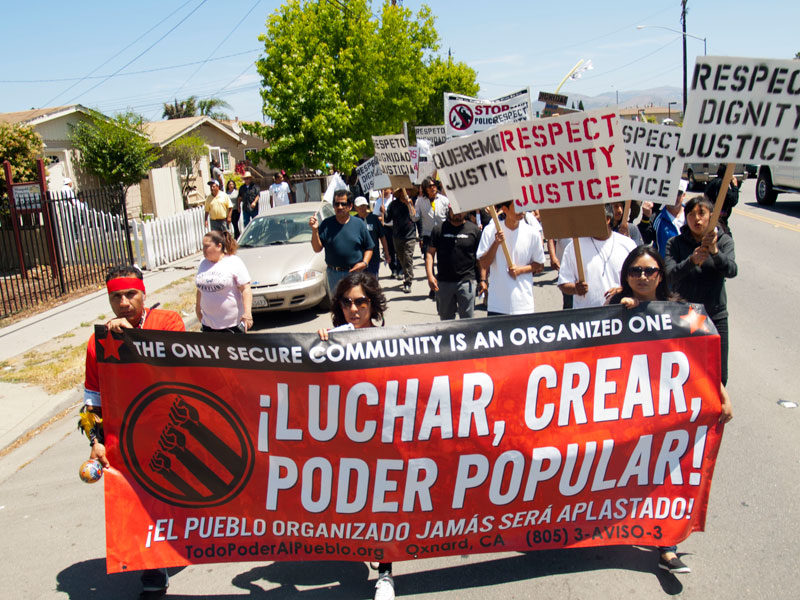 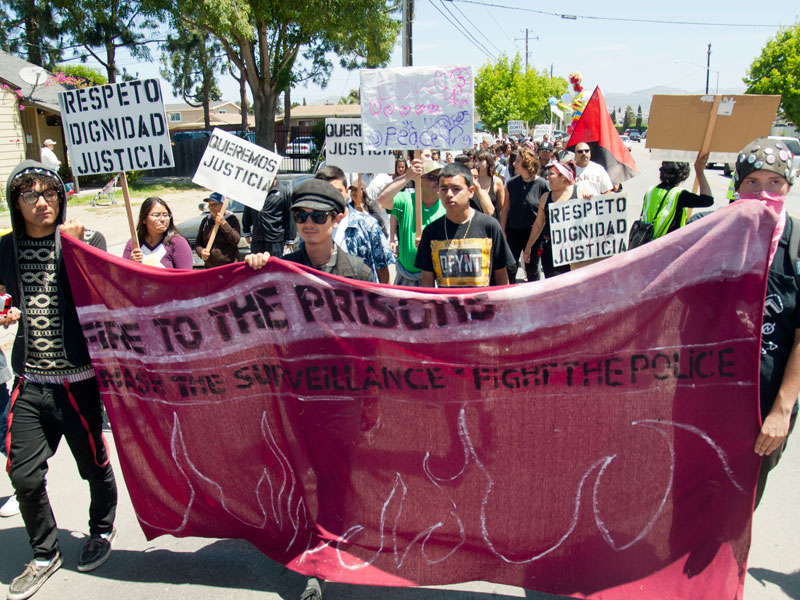 Fire to the Prisons. Smash the Surveillance. Fight the Police 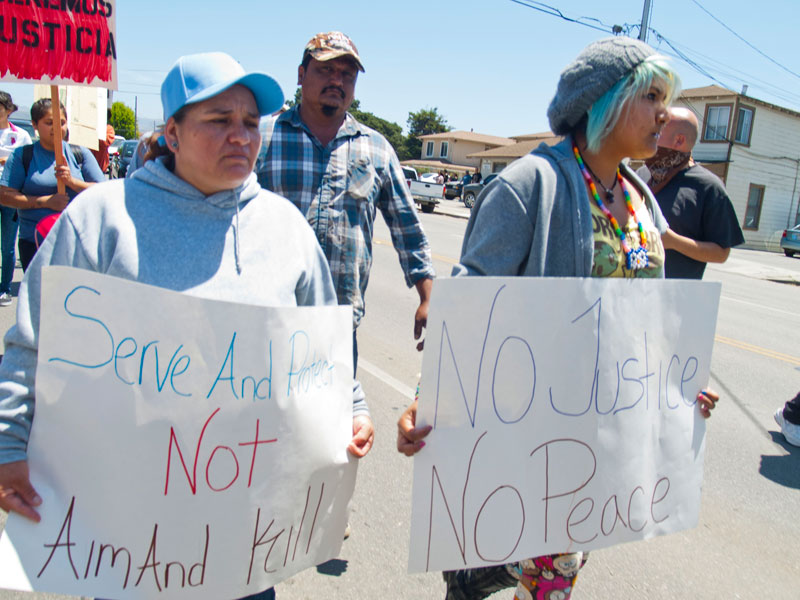 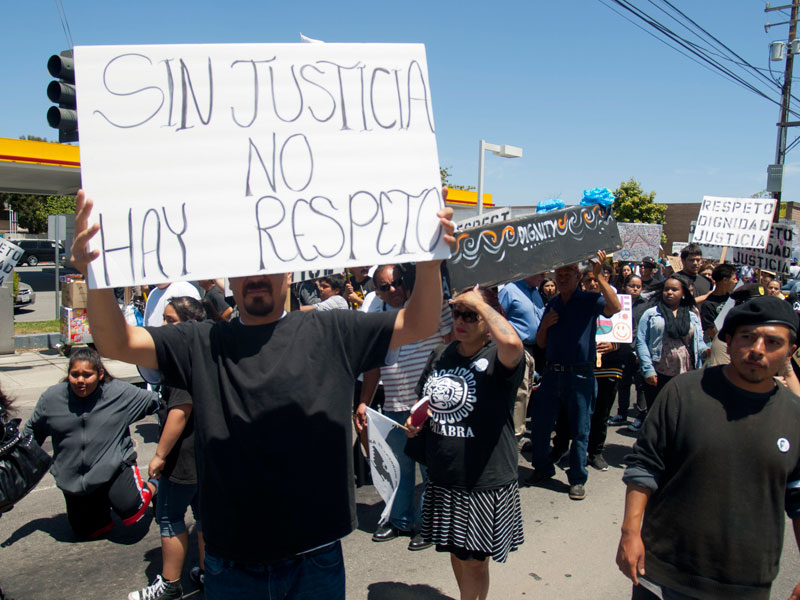 Sin Justicia No Hay Respeto. Without Justice There Is No Respect
http://bradleyallen.net/
§No Queremos Policias Asesinos
by Bradley Allen Monday May 26th, 2014 6:25 AM 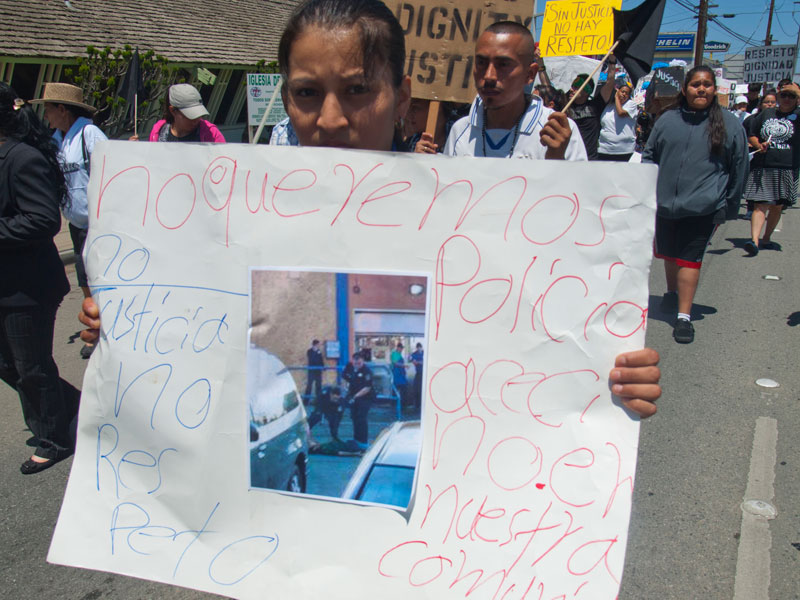 Salinas Police Officers shot and killed Osman Hernandez at Mi Pueblo Market on May 9.
No Queremos Policias Asesinos En Nuestra Comunidad. No Justicia No Respeto. We Do Not Want Killer Cops In Our Community. No Justice No Respect. 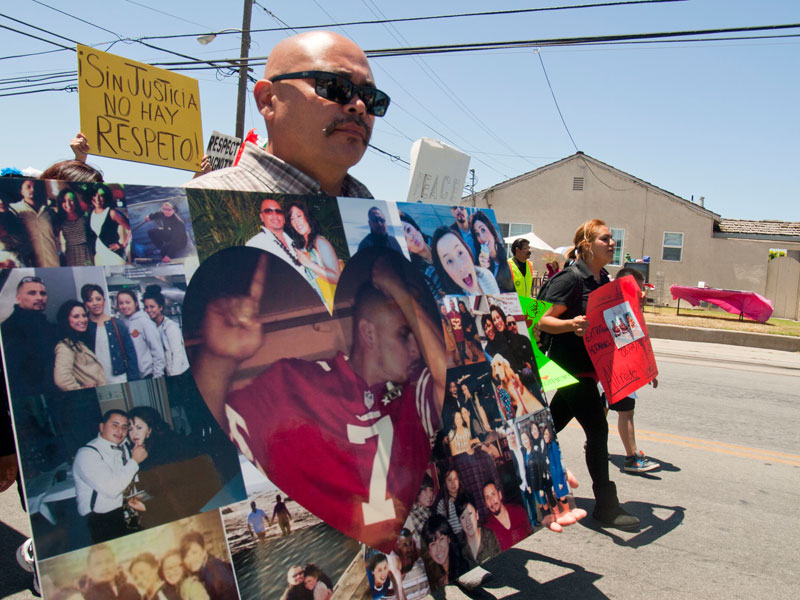 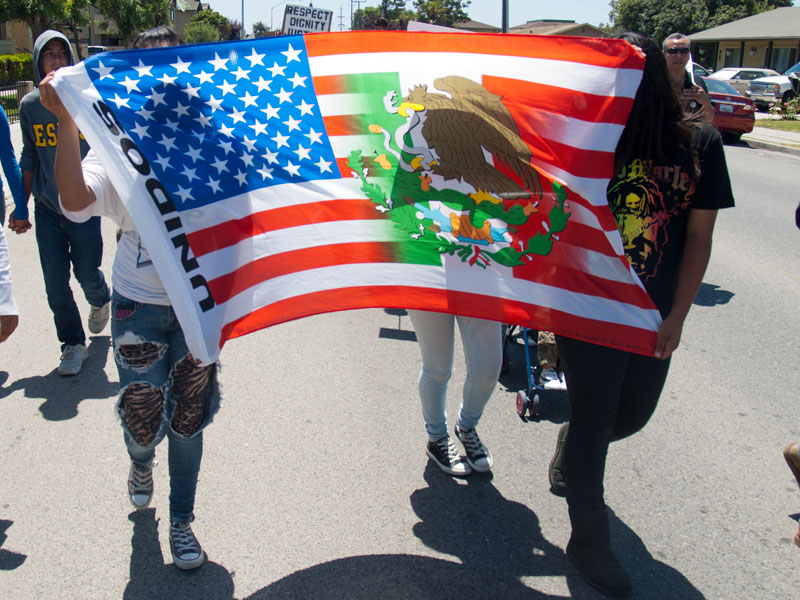 At the rally in Closter Park prior to the march, I spoke with a young person that had "Fuck the Law" written on her shirt. She, a student at Salinas High School, said people should be able to express how they feel, and that it was appropriate for her to have "Fuck the Law" on her shirt.

When I photographed her marching later in the day, her shirt was mostly covered by a hybrid USA/Mexico 'Unidos' flag which she was displaying.

Today (May 27) in Santa Cruz I spoke with two people that have been working with the organizers of the march, including before, during and after. At the rally before the march, they witnessed a group of yellow-vested organizers surround the young Salinas High School student while she was with her friends, and instruct her to not display her shirt. These witnesses that I spoke with said they personally spoke up on behalf of the young woman, saying that she was from Salinas and should be able to express her grief while wearing her personalized shirt.

Evidence is mounting that so-called community organizers, including UFW and LULAC (unions with local and national bases), as well as a college instructor and leader at a non-profit organization, are collaborating in some form with the Salinas Police Department and other government officials to silence and distort anti-police sentiments within the community of Salinas. 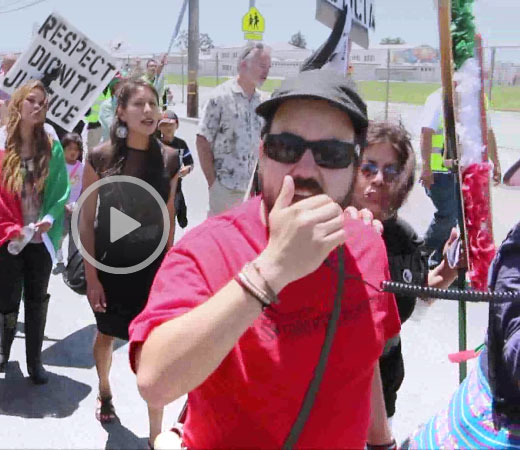 Screenshot from video by Alex Darocy.

Demonstrator on bullhorn: "How do you spell murderer?"

Woman monitoring the march while wearing a white armband and yellow backpack walks up to demonstrator on bullhorn and says: "Watch your language. Watch your language, okay."
http://bradleyallen.net/
§Declaration from the sister of Alfredo Vargas, murdered by the police last year
by Bradley Allen Wednesday May 28th, 2014 10:35 AM
Video en Español: Sister of Alfredo Vargas
https://www.indybay.org/newsitems/2014/05/27/18756442.php#18756446

Declaration on Sunday from the sister of Alfredo Vargas, murdered by the police last year:

"Good Afternoon. My name is Reina Vargas, I am the sister of Alfredo Vargas, the young man who was killed by the police last year. I am very nervous, but I am very excited to see so many people here. This case has remained a done deal. They washed their hands by saying "we think, we THINK, he had something." This is what is happening, they say they THINK they saw that someone had something. Please, someone listen, people CANNOT be dying like this. Civil rights here in the USA, in Mexico and whereever - we all have the right to live - nobody has the right to take away our life. He who gave us life is up above and He who will take our life is up above as well. Please! Don't stop giving us your support! Here we are. For the love I have for my brother Alfredo Vargas, my brother wherever he is - may justice be done! Thank you friends! Thank you!"
http://bradleyallen.net/
§Peace Police and Counterinsurgency in Salinas
by Bradley Allen Saturday May 21st, 2016 11:47 AM
Peace Police and Counterinsurgency in Salinas
https://www.indybay.org/newsitems/2014/05/29/18756555.php

La policía de paz y contrainsurgencia en Salinas
http://www.indybay.org/newsitems/2014/06/10/18757179.php
http://bradleyallen.net/
Add Your Comments
LATEST COMMENTS ABOUT THIS ARTICLE
Listed below are the latest comments about this post.
These comments are submitted anonymously by website visitors.