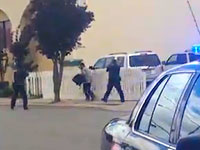 On May 20, officers with the Salinas Police Department shot and killed Carlos Mejia outside of a bakery at the corner of Del Monte and Sanborn. They said he posed a threat because he was carrying garden shears. The killing was preceded by the SPD killing of Osman Hernandez at Mi Pueblo Market on May 9, and Angel Ruiz on March 20. Angel was shot by three Salinas Police Officers simultaneously in a Wing Stop parking lot. A video of the Carlos Mejia killing went viral, and on May 21 hundreds of people took to the streets of Salinas in response.

Direct Action Monterey Network writes: "On Tuesday, May 20 two members of the Salinas Police Department murdered a man. No excuses from the SPD can justify their actions. Anyone who has watched the video can clearly see two armed thugs approach a man carrying garden shears and a bag. The two thugs proceed to follow and surround the man, then shoot and kill him. Why is the reality of the situation not obvious to everyone? Because the two armed thugs wore badges and uniforms. In some people’s eyes, the position of “Police Officer” allows these murderers to act with impunity. To many others, this only reinforces what we’ve already known: that cops exist in our community to harass, intimidate, and control us. And this string of police shootings in Salinas is nothing new, nor isolated. It is part of a growing trend of police violence that exists around the United States."

Community members are organizing in a number of ways, and a large march is planned for Sunday, May 25.

Burning All Illusion Tonight (Salinas Riots, PDF Poster) | Cops train to kill: Salinas police Chief says, "We do not train to shoot people in the leg"