Add an Event
Newswire
Calendar
Features
Home
Donate
From the Open-Publishing Calendar
From the Open-Publishing Newswire
Indybay Feature
Publish to Newswire
Add an Event
Related Categories: Santa Cruz Indymedia | Global Justice & Anti-Capitalism | Police State & Prisons | Racial Justice
Burning All Illusion Tonight (Salinas Riots, PDF Poster)
by FireWorks
Saturday May 24th, 2014 4:02 AM
Policing is About Control, in Resisting it, We Must Become Totally Out of It. 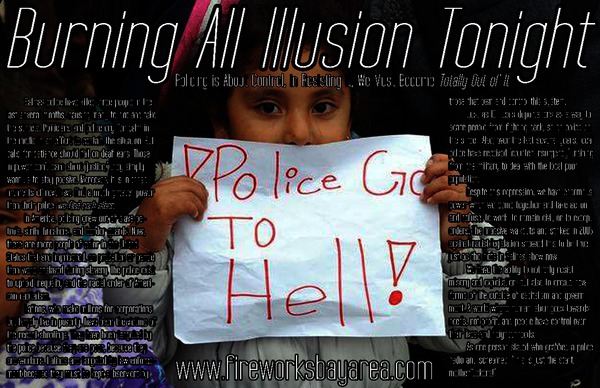 Download PDF (6.1MB)
Salinas police have killed three people in the last several months, causing many to riot and take the streets. Politicians and police cry for calm in the media in an effort to contain the situation. But calls for patience should fall on deaf ears. Those in power don’t care about ‘justice,’ they simply want us to stay passive. Moreover, it is in these moments of revolt we find a much greater power than their police: we find each other.

In America, policing grew out of slave patrols, strike breakers, and border guards. Now, there are more people of color in the United States that are imprisoned, on probation or parole than were enslaved during slavery. The police exist to uphold inequality and the racial order of American capitalism.

Just as ICE uses deportations as a way to scare people from fighting back, so do police on the street. Also, over the last several years, local police have received ‘counter-insurgency’ training from the military to deal with the local poor population.

Despite this repression, we have enormous power when we come together and take action and refuse: to work, to remain civil, or to except orders. The massive walkouts and strikes in 2006 against racist legislation showed this to be true - just as the riots in Salinas show now.

We have the ability to not only resist misery and exploitation, but also to create new forms of life outside of capitalism and government. A world where human labor goes towards needs, not profit, and people have control over their lives and neighborhoods.

As one person stated who grabbed a police radio and screamed: “This is just the start, motherfuckers!”
http://www.fireworksbayarea.com
Add Your Comments
Support Independent Media
We are 100% volunteer and depend on your participation to sustain our efforts!