Add an Event
Newswire
Calendar
Features
Home
Donate
From the Open-Publishing Calendar
From the Open-Publishing Newswire
Indybay Feature
Publish to Newswire
Add an Event
Related Categories: Santa Cruz Indymedia | Police State & Prisons | Racial Justice
Salinas Marches Against Police Brutality
by Alex Darocy (alex [at] alexdarocy.com)
Tuesday May 27th, 2014 5:49 PM
In response to the recent killings of three residents by officers with the Salinas Police Department, a coalition of local political and labor groups organized a march and rally for "Respect, Dignity, and Justice" in East Salinas on May 25. The rally began at Closter park, and after hearing from relatives and family representatives of the deceased, the march visited two of the locations where the killings occurred. The event was organized by a number of political and labor groups, including the Salinas Council of the League of United Latin American Citizens (LULAC) and United Farm Workers (UFW). 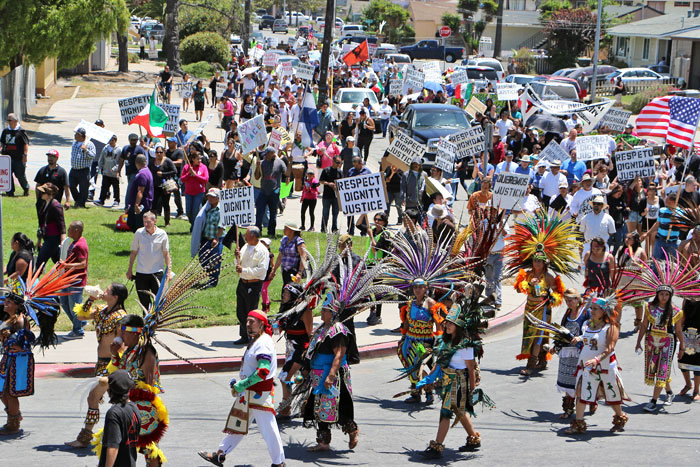 An organizer stated that the rally was the "first step" towards their objective, which she then described in more detail. Their list of goals includes: a convention to take place in Salinas in five weeks; a federal investigation of all fatal police shootings within the last 10 years; The firing of the Salinas Police Chief; the creation of a civilian review board; the review and update of police training; and the arrest and prosecution of the police officers that killed Carlos Mejia and Osman Hernandez.

Following those two killings, the Salinas community was quiet until a video of the pursuit and killing of Carlos Mejia went viral. Mejias was carrying a pair of garden shears when he was killed by SPD officers outside of a bakery at the corner of Del Monte and Sanborn on May 20, and on the evening of May 21, hundreds of East Salinas residents spontaneously took to the streets to protest the police brutality.

During the march on May 25, individuals carried three small coffins for the entire route. A banner held at the front of the march read, "In Memory Of...María Irma de la Torre, Angel Ruiz, Osman Hernandez, Carlos Mejia, and Constantino Garcia."

Constantino Garcia was shot and killed under mysterious circumstances near the corner of Del Monte and Sanborn as the large protests on May 21 occurred.

María Irma de la Torre, who suffered from epilepsy, had just had a seizure and had locked herself in her sister’s minivan in July of 2008 when she was killed by officer Steven Mattocks of the Salinas Police Department. According to attorneys who filed a civil suit against the city on behalf of her family, de la Torre was complying with officers' orders when she was killed. The city eventually wound up settling the lawsuit with her family for $2.1 million in 2010.

Individuals from throughout California and the Bay Area traveled to participate in the march on May 25, with organizations such as the Justice Coalition for Andy Lopez and the Kenneth Harding Jr. Foundation represented.

The look and feel of the march was affected when organizers attempted to limit the types of messages participants where allowed to communicate. When march chants were perceived to be too controversial, organizers would attempt to drown them out with the siren of a megaphone, or by asking individuals to "watch their language." 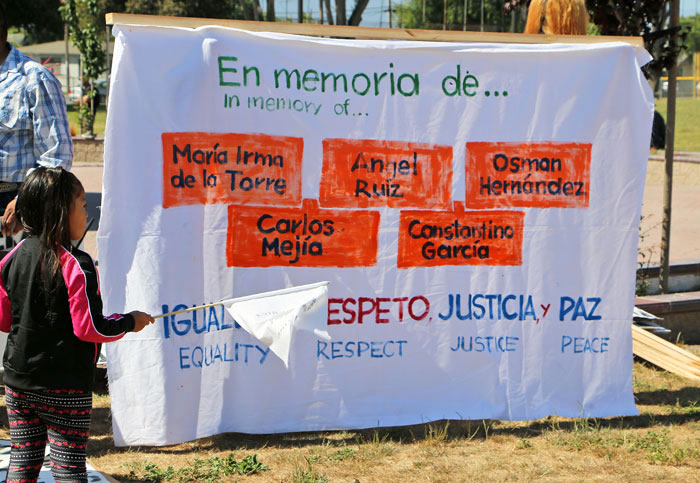 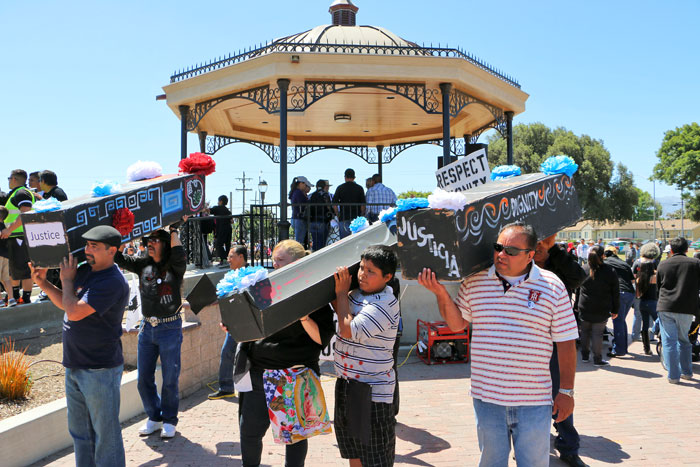 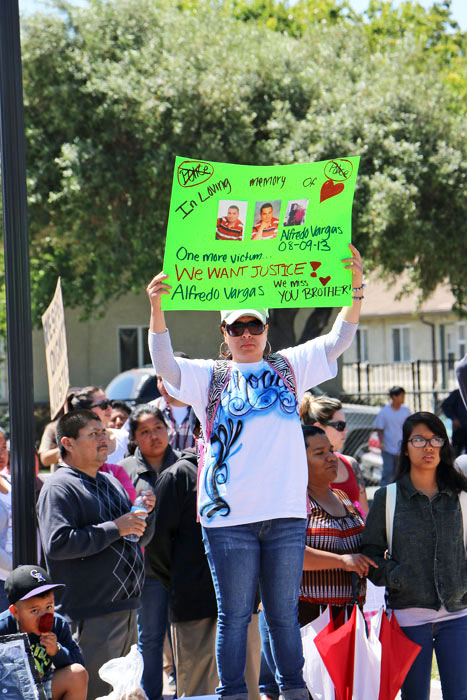 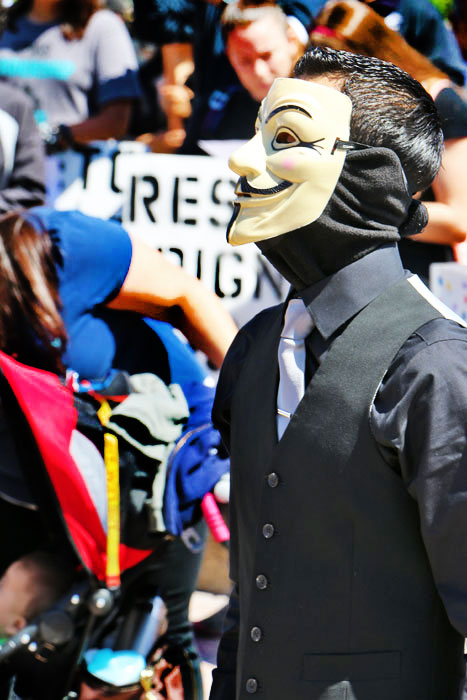 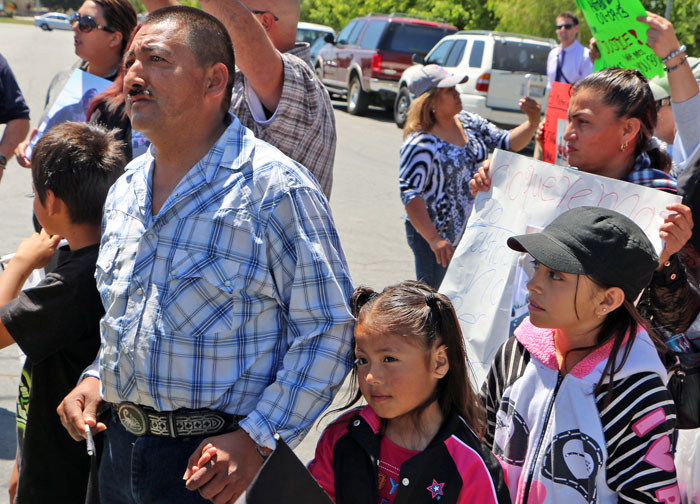 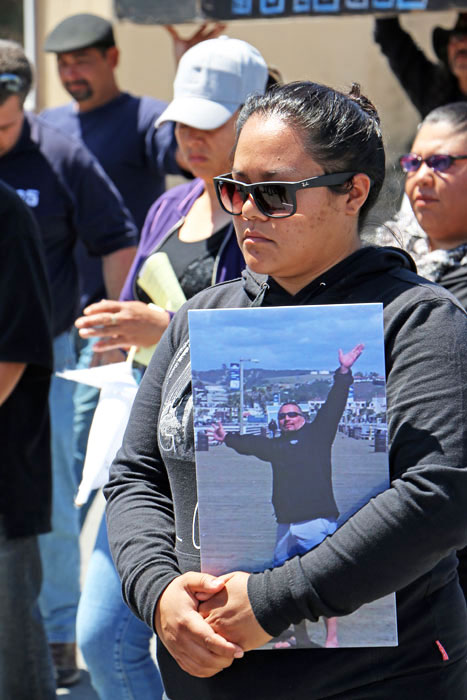 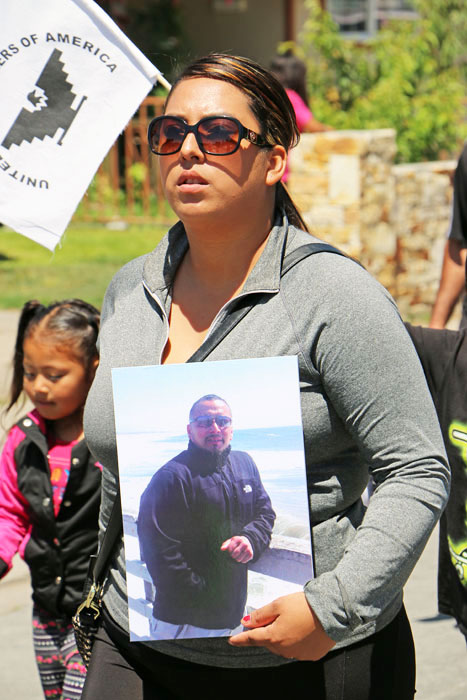 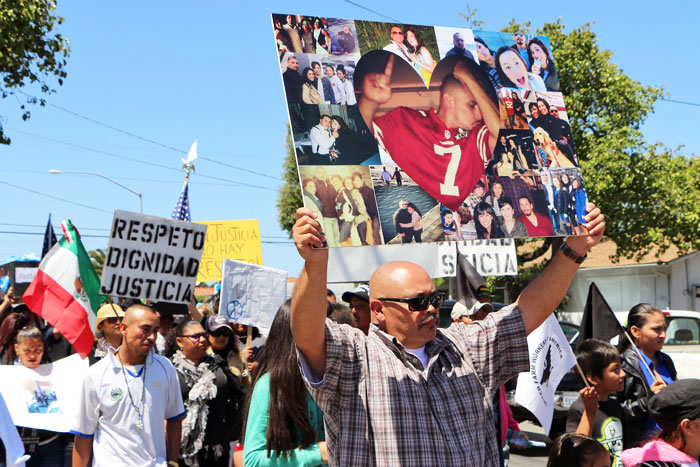 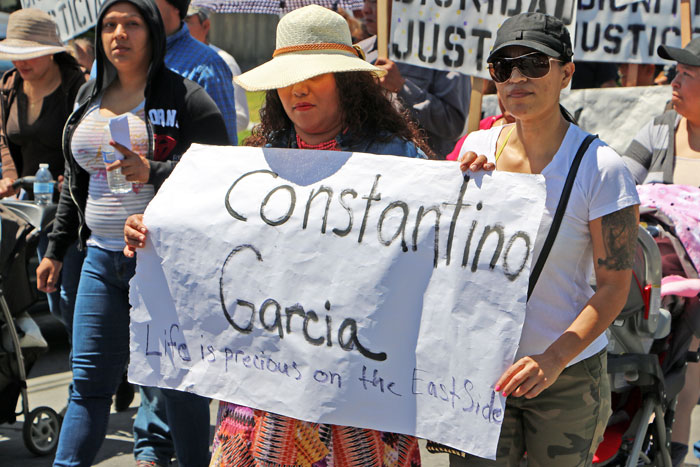 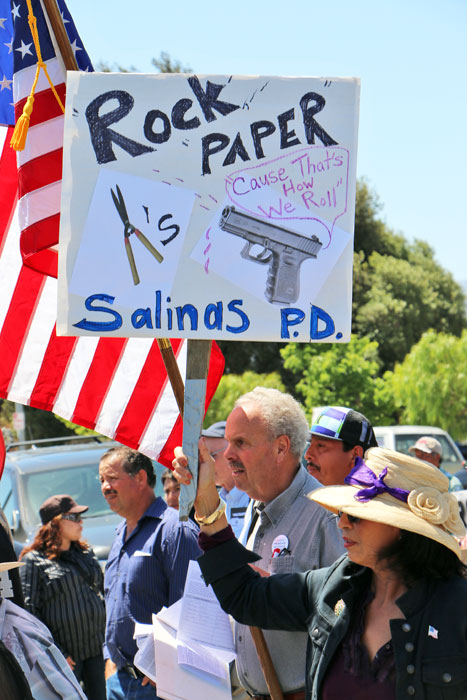 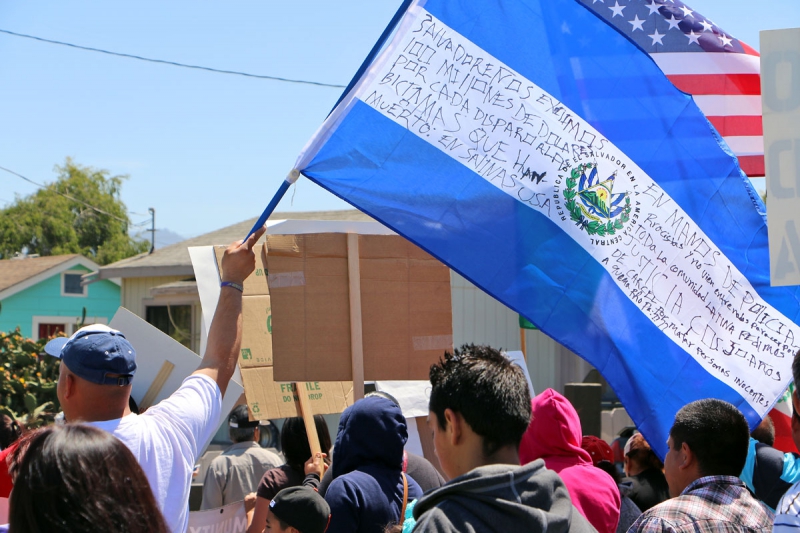 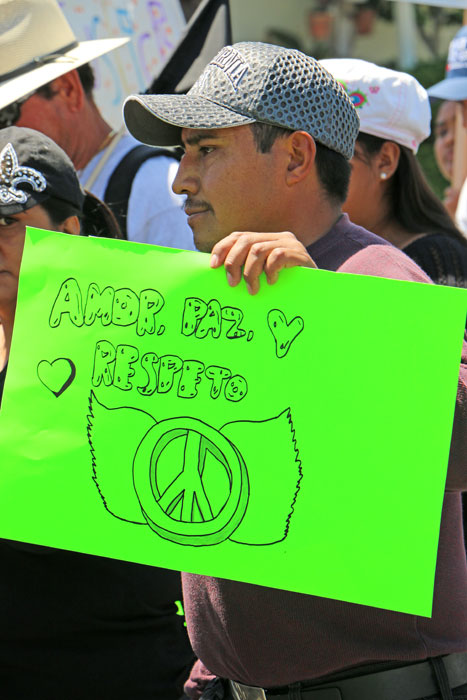 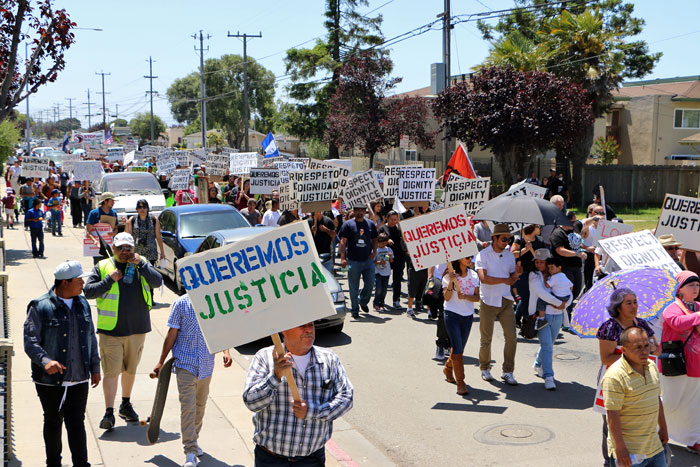 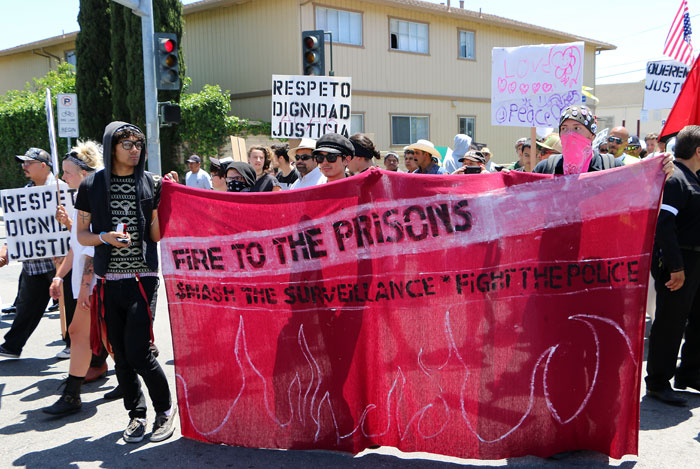 §Marching past the location of the killing of Carlos Mejia
by Alex Darocy Tuesday May 27th, 2014 5:53 PM 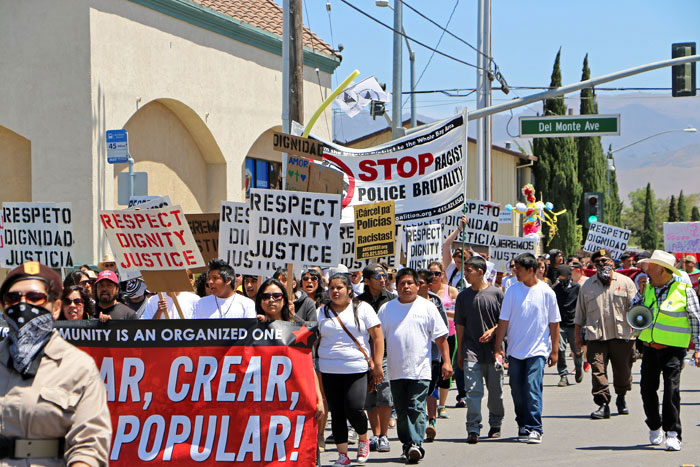 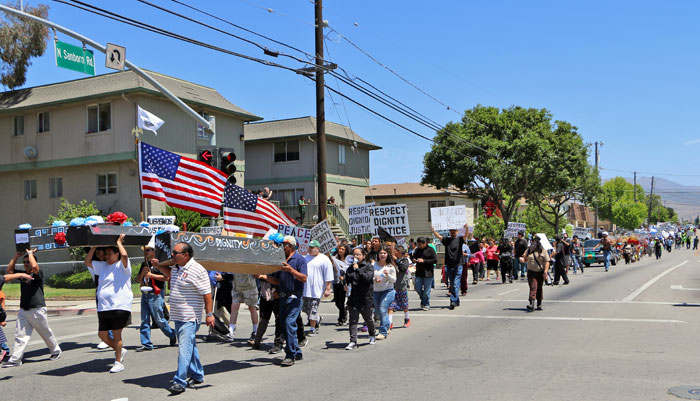 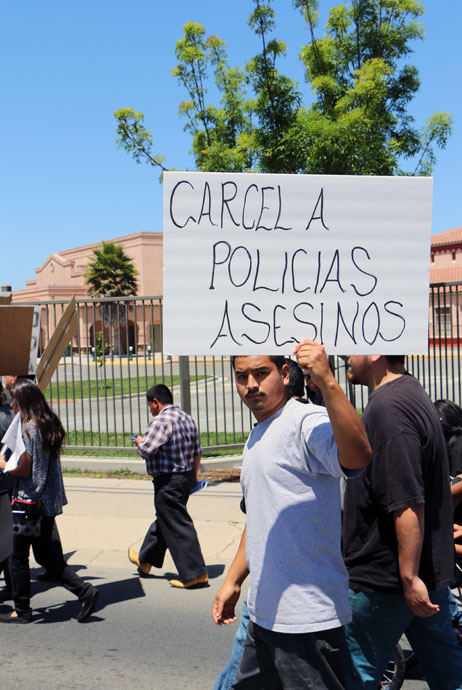 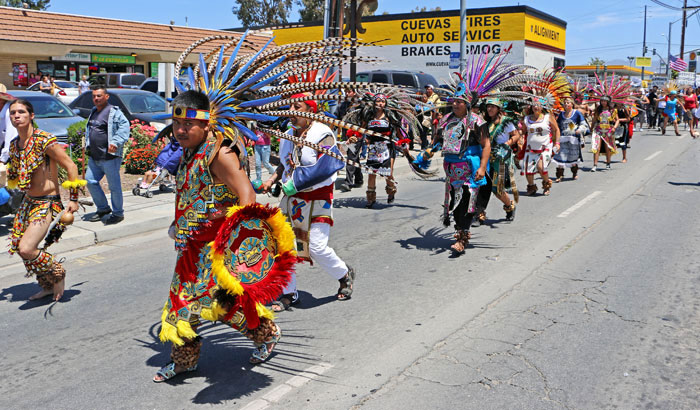 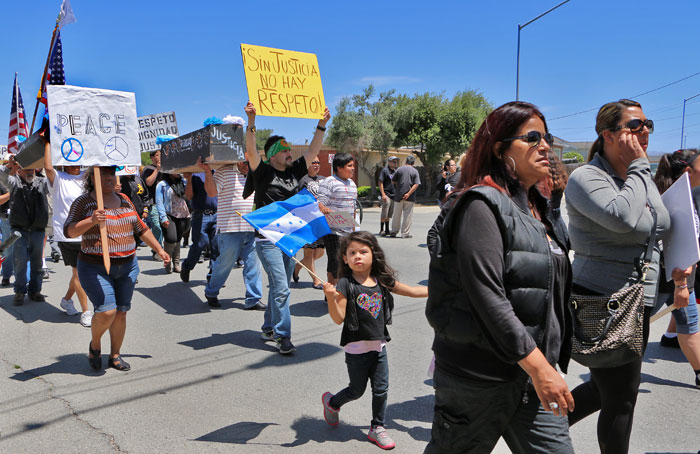 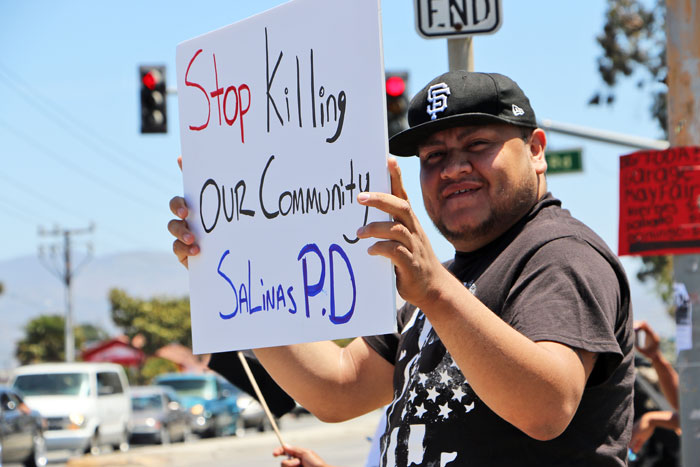 Salinas Police Brutality March
§Marching past the location of the killing of Osman Hernandez
by Alex Darocy Tuesday May 27th, 2014 5:57 PM 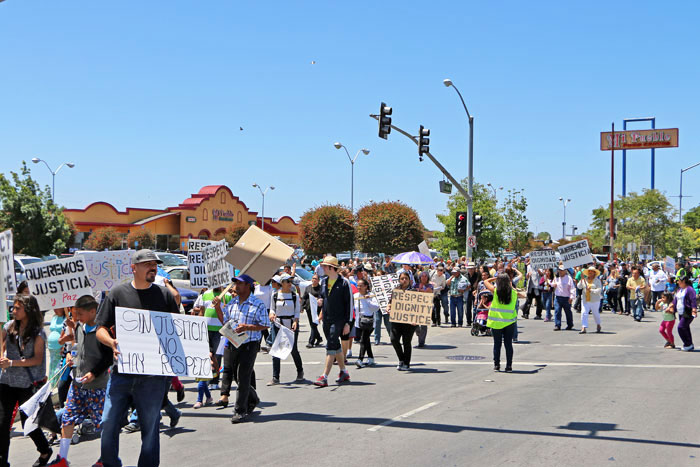 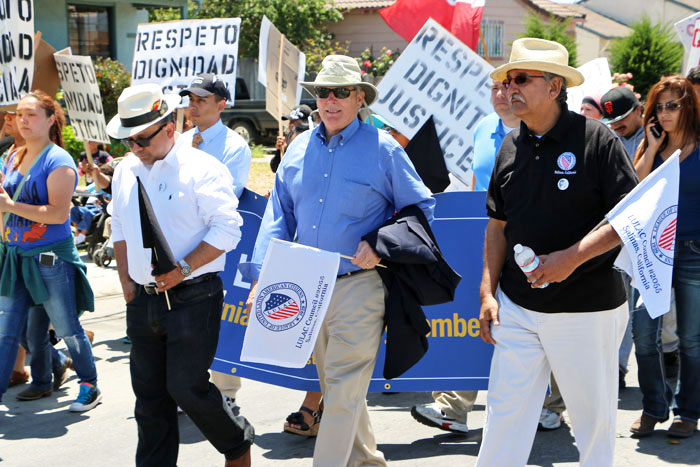 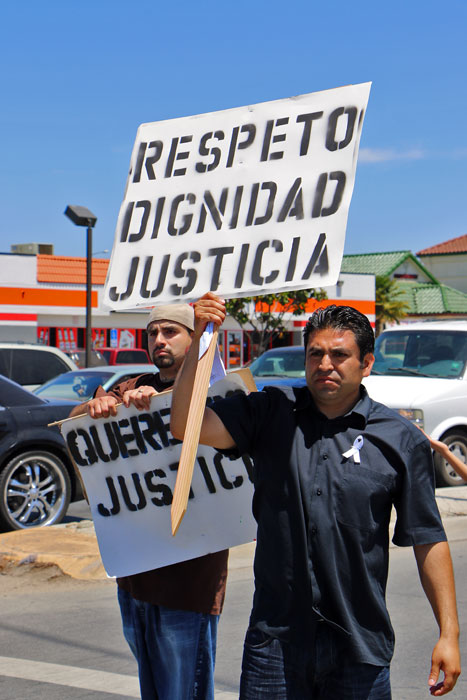 José Castañeda was one of the organizers of the march.

Here he is pictured, coincidentally, next to Ramon Cairo of Santa Rosa who is active with the Justice Coalition for Andy Lopez.
Add Your Comments
LATEST COMMENTS ABOUT THIS ARTICLE
Listed below are the latest comments about this post.
These comments are submitted anonymously by website visitors.