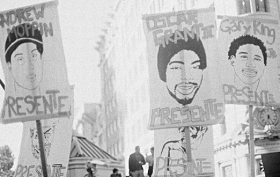 Mehserle Found Guilty of Involuntary Manslaughter
"No Justice, No Peace, Fuck the Police!!!"

On July 8th, 2010, former BART police officer Johannes Mehserle was found guilty of involuntary manslaughter for shooting and killing Oscar Grant on January 1st, 2009 in Oakland, California. Mehserle was led away from the courtroom in handcuffs and is now in custody. His sentencing was expected on Friday, August 6th, but has now been delayed at the defense's request without a final date set yet. Involuntary manslaughter can carry a sentence of 2 to 6 years, with up to 10 years added for a gun enhancement. Sentencing and other motions are now on the court calendar for Friday, November 5th at 8:30 a.m.

In Oakland, thousands of people took over the intersection of Broadway and 14th for a protest which started shortly after the 4PM verdict and lasted until late in the evening. Early in the evening, a woman was injured when a police vehicle backed into her. Later, several windows were broken, a Foot Locker was broken into, and several small fires were set in trashcans. Over fifty protesters were arrested.

Oscar Grant and Police Accountability | Oscar Grant and the Role of Militant Action | An Anti-Authoritarian quest against Poilce Violence in the Central Valley! | Pigs to Rally in Support of Johannes Mehserle & Other Cops Who Kill |

Before you go out in the streets to demonstrate, write the National Lawyers Guild's Bay Area hotline number on your arm: (415) 285-1011. The NLG was documenting on July 8th and is currently providing legal support for arrestees.

Full coverage of the Justice for Oscar Grant movement