by dave id
The Oakland General Assembly for Justice for Oscar Grant held a second press conference in less than a week after it was learned that Councilmember Desley Brooks was heading up organizing a counter-event at the same time and place as the community gathering set for the day the verdict in the Mehserle murder trial was announced, 6pm at 14th and Broadway. It was obvious that the purpose for the city-led event, although not officially sponsored by the City of Oakland, was to undermine the community gathering that had been called for as early as late May before the trial of Johannes Mehserle even began. Addressing those fretting about civil unrest, Michael Walker, aka Ghetto Prophet, concluded the press conference by declaring: "For anybody out there who feels like people are against peace, if you really want peace in this city, then fight for justice, and I guarantee you'll have peace." 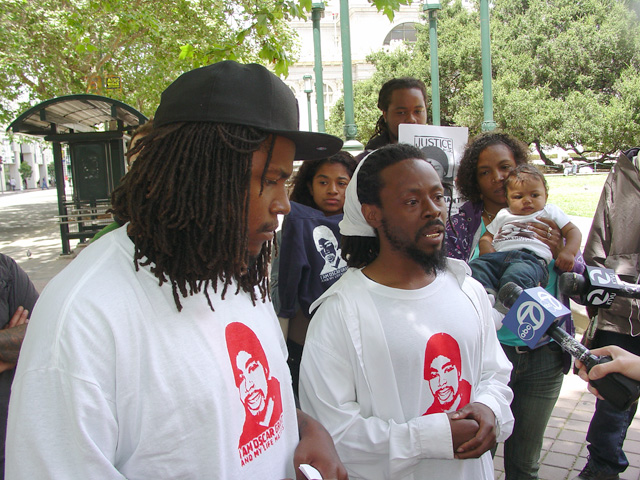 The press conference was held on the sidewalk on 14th Street at the edge of Frank Ogawa plaza at the same time that free chicken and soda were being handed out in Room 104 of City Hall, where Oakland officials and NGO leaders were scrambling at the last minute to organize the city-approved and sanitized event that was to counter the grassroots community gathering on the day of the verdict. They claimed that Wanda Johnson, Oscar Grant's mother, would call into the city-led event to speak, although that never happened. The idea of a candlelight vigil was discussed, although it was determined that those candles should be electric and not real candles. They had a promotional flier ready that read at the very top "Don't burn your city!".

The Oakland police department likewise did their part to counter the community gathering by visiting Oakland schools to discourage youth from attending the grassroots speak-out. When police asked if students intended to go, they say "no," but as soon as the OPD left the room, the students said they couldn't wait to go to 14th & broadway after the verdict.

Besides confronting the counter-organizing effort at the press conference, five demands were issued: Tony Pirone must be tried for accessory to murder, abolish the California Police Bill of Rights, a federal indictment must be issued against BART for civil rights violations, BART police must be disarmed, and the new gang injunctions in Oakland must be declared unconstitutional.

Speakers at the General Assembly for Justice press conference included Jabari Shaw, president of Laney College BSU, Michael Walker, both of whom attended Meherle's trial in Los Angeles (with their friend Tim Killings, who was arrested and spent three days in jail for speaking out in the LA court room during Meherle's testimony), and Tracey Bell-Borden.

City of Oakland Press Release: Join a Speak-Out or Make Music to Express Yourself If a "Not Guilty" Verdict Comes Down
https://www.indybay.org/newsitems/2010/06/30/18652326.php 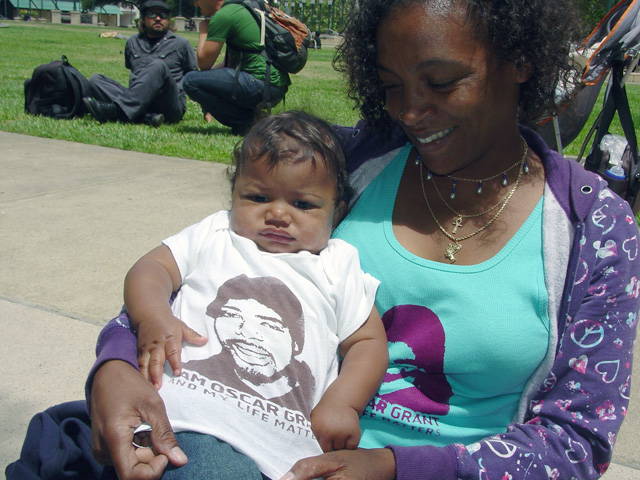 The shooting of Oscar Grant at the Fruitvale BART station was a devastating event for one young man, his friends and family and his whole community. A jury is currently deliberating on the fate of his accused shooter Johannes Mehserle, and a verdict is expected in the very near future.

We would like to invite you to a community rally to promote healing and support Oscar Grant’s family, friends and community. The event is to be held in front of City Hall on the day of the verdict.

Please join community members, religious leaders, family and friends of Oscar Grant, and elected officials for a rally which will include:

WHAT: Day of Verdict Rally

Sponsored by the Community Working for Peace, Healing and Justice


END_OF_DOCUMENT_TOKEN_TO_BE_REPLACED
§What the city-led event looked like at 6:50pm on verdict day
by dave id 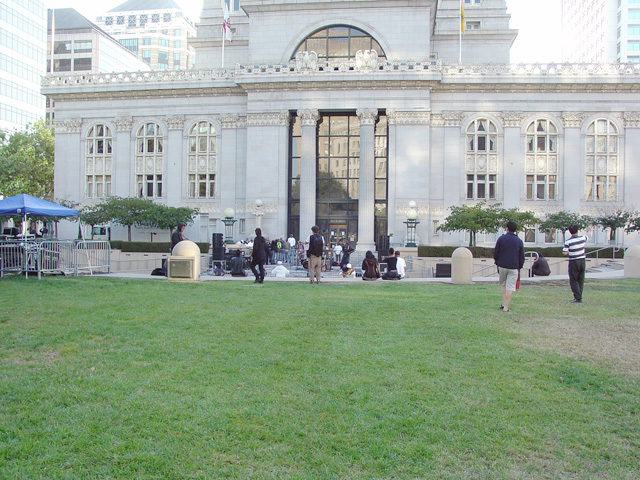 Less than two dozen people present, and that's being generous, half of whom were security or sound-system people. Even Desley Brooks and Jean Quan weren't at their own event -- they were walking around in the street on Broadway.
END_OF_DOCUMENT_TOKEN_TO_BE_REPLACED
Add Your Comments
Support Independent Media
We are 100% volunteer and depend on your participation to sustain our efforts!