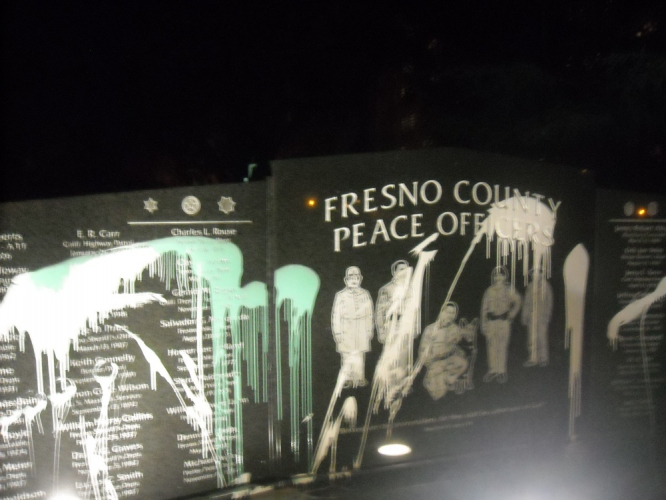 On January 1, 2009 Mehserle had pulled his taser out twice before he pulled out his pistol and killed 22 year old Grant who was face down with his hands behind his back with a cops knee in his neck. I find it very hard to believe that Mehserle somehow forgot where he put his 7 oz taser only a moment before and mistakenly pulls out his pistol which weighs 3 times as much and is a different shape. He looks at it and then shoots a man in the back who presented no threat to his life. His partner Pirone had yelled “Bitch Ass Nigger” twice in Grant’s face before he threw Grant to the ground to be executed. It’s hard to believe that anyone could commit this heinous act of violence, have it caught on tape and then get away with involuntary manslaughter. But cops get the best lawyers and getting crooked cops off was nothing new for Mehserle’s attorney Michael Raines.

Raines got the Oakland Rough Riders, a gang of cops who would regularly beat down, arrest and plant drugs on the people of West Oakland, off back in 2003. For the Mehserle trial, first Raines got it moved out of Oakland down to L.A., then he managed to create a jury without a single African-American on it, then he twisted the rule that cops and family can’t be on the jury by saying his client was assured a “jury of his peers” so the judge allowed 4 cops friends and family to sit on the jury. Raines stacked the deck and the judicial system failed to do justice. Again. As if it were designed to.

There was nothing unique or special about this murder. Poor people are gunned down, harassed, and intimidated by police every day all over this country. The only thing different about this case is that due to the video of the murder and the inaction of mayor Dellums and the D.A., the people took to the streets and rebelled against a system that had shown no interest in justice. Due to the actions in the street on Jan 7, Mehserle was arrested and charged with murder; this never happens and if not for the rebellion in the streets it would not have happened. The people took to the streets once more on Jan 14 and Mehserle’s openly racist partner Pirone was fired. If not for the people’s actions, none of this would have happened and the status quo would be maintained. The people’s action on July 8th rejects the injustice of protecting a murderer because he is a cop. This verdict sends the message that it is okay for a white cop to murder a black man in cold blood.

The defacement of the “Peace Officer” memorial that night in Fresno was an attack on the idea that when a cop kills somebody it is okay and we all just have to accept it. As Oscar Grant’s memory was defaced by this verdict, so were the memories of the officers on that memorial defaced. If we look at the way the media deals with deaths by cops vs. death of cops we see a disturbing trend. In Grant’s case and in every Fresno murder by cop we see the chief and media coming out, demonizing the victim, saying how this person was in a gang, had a criminal history, was on drugs, was armed, etc. etc. even when it ends up these things were untrue or that the person had turned their life around or had mental health issues that the officer was unable to recognize and deal with. When an officer is killed they are instantly made into a saint, it didn’t matter how often they beat their partner, how many drugs they sold, or how many people they killed; the dirtiest cop becomes an angel once they die on the job. Not all cops are bad, but many are, and the system that protects them is corrupt. Mehserle was a bad cop. Several months before he executed Grant, Mehserle and fellow officers had beat up Kenneth Carrethers, a 40 year old black man. Carrethers was charged with resisting arrest but this charge was dropped when the D.A. realized they’d have to release Mehserle’s personnel files. How much did this guy have to hide?

We are told that we need cops and that without them there would be complete chaos and rampant crime. In reality the cops are here to maintain the status quo which benefit’s the wealthy over the poor. They “serve” the rich and “protect” the social order which maintains inequality. FPD doesn’t even pretend any more, their cars say “professional, effective, timely” labeling them as the mercenaries they are. From grade school we are taught that cops are our friends. Johannes Mehserle was not Oscar Grant’s “friend” as he pulled the trigger that ended Grant’s life. Tony Pirone was not Oscar Grant’s “friend” as he screamed obscenities and racial slurs in Grant’s face before holding him down to be executed. These officers were doing their job, serving the rich and maintaining the status quo where the life of a black man living in poverty has no value except to his employer.

This problem is systemic and as present in Fresno as it is in Oakland. In a recent article in Colorlines, it was found that between 2002 and 2009, FPD had 27 officers with multiple shootings. Of these, 22 are still on active duty, some with as many as 4 or 5 shootings a piece. Oakland only had 5 repeat shooters for this period. FPD has no respect for human life unless that human has money. Crime happens when people have a lack of resources and legal opportunity, throwing them in jail only makes this problem worse. Cops protect this inequality of resources; and with over half of the city budget going to PD, we see that they are a drain and part of the problem rather than part of the solution.

Real social change and justice goes against the interests of those in power. The police serve those in power and are on the front lines of maintaining injustice. We cannot just stand around with signs and petitions begging for justice. We must stand up and seriously challenge the system and it’s agents of injustice. Historically it has been because of militants like Malcolm X that power has conceded to the reforms of MLKs. The uncompromising militant demands total justice and is willing to fight for it. The system would rather maintain their control and injustice by making concessions to the reformist than to see their power stripped away and given to the people. When the people of Oakland took to the street last January, they forced the system to act and arrest Mehserle. “No Justice! No Peace!” needs to be more than an empty threat, that phrase has power and meaning and we need to be living up to our end of it. There is no justice, the only peace is people not fighting back against the police aka occupying forces.

--Alexandros Grigoropoulos
Add Your Comments
LATEST COMMENTS ABOUT THIS ARTICLE
Listed below are the latest comments about this post.
These comments are submitted anonymously by website visitors.