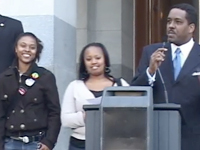 Following a series of interfaith Town Hall meetings that have been held in Oakland since the murder of Oscar Grant, the first in a series of planned Caravans for Justice headed to Sacramento on February 19th, focused on various aspects of the "justice" system. A caravan of cars and buses traveled from Richmond, Oakland, San Francisco, and East Palo Alto to the California State Capitol to speak out and lobby legislators a number of issues: Oscar Grant and police killings (including revising the "Police Bill of Rights" that shields their misconduct records from the public), repressive gang laws, reforming the Three Strikes law, dropping the charges against the San Franciscso 8, environmental justice, and other laws and issues that criminalize urban youth and negatively effect communities of color.

Townhall meetings continue to be held every Saturday at 4:30pm at Olivet Missionary Baptist Church in Oakland in order to advance a unified movement for justice and to plan for the Caravan for Justice #2.

See also: The Police Bill of Rights, Copley, and Where We Are Today in CA with Police Accountability |