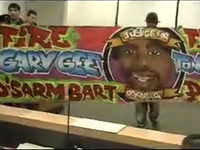 On Thursday, February 12th, community activists and leaders both political and religious attended a BART Board of Directors meeting to voice their concerns about the Board's inadequate response to the abuse and murder of Oscar Grant III on January 1st. After a half hour of being largely ignored by the Board, Coalition Against Police Executions (CAPE), the Black Panthers, and No Justice No BART assumed control of the meeting and unfurled a banner in the room. Three demands were issued: 1) fire BART Police Chief Gary Gee; 2) Fire and prosecute BART police officer Tony Pirone; and 3) respond to community demands in public. BART hired an outside law firm to investigate police actions related to the the murder of Oscar Grant without any public input. After the demands were made, demonstrators then worked their way through the Board asking them one by one to publicly commit to the demands. While most directors skirted the direct questioning or responded that they could not support the demands at this time, director Lynn Sweet stood out for agreeing that Chief Gee should be fired. Director Tom Radulovich agreed that all related proceedings should be held in public, adding that the incident has been mishandled by BART, that BART police review has been inadequate, and that BART's General Manager Dorothy Dugger should be dismissed. Activists promised that "more, much more is coming," unless BART as a whole accedes to the community's demands for more accountability and transparency.

Coalition Against Police Executions | No Justice No BART

See also: Thoughts Provoked by the Comments of Preachers at the Funeral of Oscar Grant | *Forty One Shots and Nineteen Hits* for Oscar Grant & Richard Lua |

Uhuru Radio discussion on Campaign for Justice for Oscar Grant |