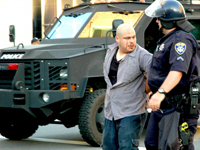 On January 30th, bail for BART police officer Johannes Mehserle was set at $3 million. Oakland mayor Ron Dellums had released a statement to the media late Friday afternoon saying bail was posted but the Alameda County Sheriff's Office claims he was mistaken. Mehserle claimed he was reaching for a taser when he accidentally grabbed his gun (which was loaded and with safety off) and shot to death Oscar Grant, who was lying face down on the ground.

Protesters gathered outside the courthouse for a demonstration planned to coincide with the bail hearing (1 | 2). After bail was granted, demonstrators marched toward 14th and Broadway and then to the Oakland Police Department headquarters. BART closed the 12th Street station. Oakland police fired tear gas and projectiles at protesters and later blocked off several roads. At least nine people were tackled and arrested for "failure to disperse."

A demonstration was held Saturday, January 31st, at Oakland City Hall. Around 50 people gathered despite the large number of police present. Demonstrators read their demands for police accountability.