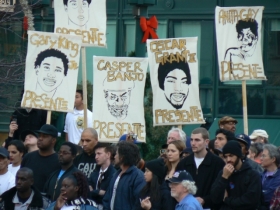 There have been protests and meetings nearly every day since last Wednesday, when downtown Oakland erupted with social unrest, including one Monday night, January 12th, in San Francisco:

The BART police officer filmed shooting Oscar Grant on New Year's Day was arrested for murder on January 13th, one day before a planned protest in Oakland.

When the main protests ended, there was a break-away protest. Around 8:20pm the Wells Fargo near 12th and Broadway was attacked, car windows broken, and several fires were set. Police moved in with tear-gas and over the next few hours there were 18 arrests. Breaking Coverage

On Martin Luther King Jr. Day, January 19th, a March for Justice & Reparations for the family of Oscar Grant III will start at West Oakland BART.

On Monday January 12th, BART police handed over evidence to Alameda County District Attorney (DA) Tom Orloff on the shooting. Johannes Mehserle has refused to say anything but police say they questioned the six other BART police officers who were on the scene. BART police also say they questioned 21 people who witnessed the shooting, but police decided to make no recommendation on whether charges should be filed in their hand-off to the DA. Johannes Mehserle, was arrested on murder charges Tuesday, January 13th in Nevada near Lake Tahoe.