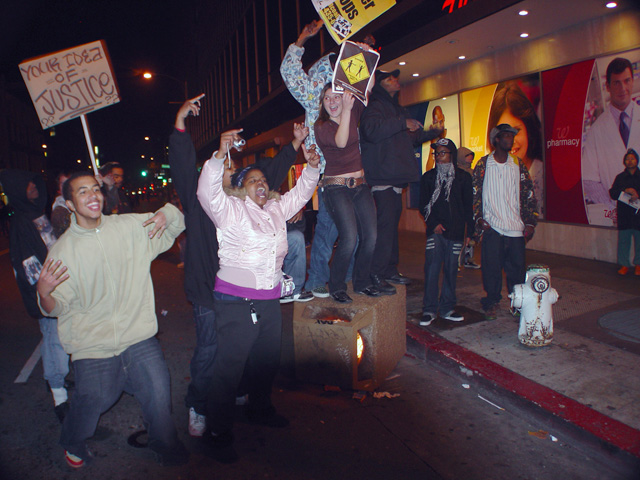 "I'm sorry my car was burned but the issue is very upsetting."
-Ken Epstein, assistant editor of the Oakland Post, who was finishing an article about Grant's death, watched from the 12th story of his office at 14th and Franklin streets as his 2002 Honda CR-V disintegrated in a roar of flames (Oakland Tribune)

The murder of Oscar Grant by Bay Area Rapid Transit (BART) police officer Johannes Mehserle early New Year's morning sent a wave of grief throughout the Bay Area and reminded all that racism and police violence continue to be endemic components of US society. During the following days, that pain transformed into overflowing anger as multiple videos of the execution recorded by witnesses emerged on the internet and in the media. One week later on January 7, over a thousand people from diverse communities across Oakland and the Bay Area gathered to show their anger and be in the presence of others feeling similar grief. This hastily planned rally shut down the Fruitvale BART station where the shooting took place as speaker after speaker addressed the crowd. Without any plan or organization, the vast majority of those who patiently listened to speakers for over two hours took the demonstration into the streets with a spirited march that made its way towards downtown as the sun set.

As the march reached the Lake Merritt BART station and headquarters of BART police downtown, clashes immediately broke out leaving one police cruiser destroyed alongside a burning dumpster. Marchers dispersed down side streets to the sounds of police weapons discharging and the sting of tear gas in the air. The following hours witnessed waves of rioting and demonstrations throughout downtown Oakland that even forced Mayor Ron Dellums to come out into the streets and promise the opening of a homicide investigation in a failed attempt to subdue the angry crowds. Hundreds of businesses and cars were damaged or destroyed and dumpsters were left burning. The next day, a BART board of directors meeting was filled beyond capacity and overwhelmed with community members expressing indignant rage, clearly feeling validated and empowered to speak up by the previous night's rebellion.

In the days since the unrest, rumors have begun to circulate that anarchists hijacked the otherwise peaceful event and were responsible for unleashing the 'violence'. A cover story in the San Francisco Chronicle two days after the rioting quoted an organizer of the Fruitvale rally as saying that he was led to tears when his work was "destroyed by a group of anarchists." This dangerous and misleading narrative obscures what actually transpired and why, on that evening, the streets of Oakland unleashed such a powerful show of resistance and solidarity that gave many an empowered glimpse of radical new possibilities.

It is true that anarchists were present from start to finish on Wednesday. Counter to some generalizations that assume all anarchists are white, those who were there on Wednesday come from diverse backgrounds. They participated in a wide variety of ways; from spreading the word about the rally beforehand in order to have a large turnout, to spending hours painting banners and signs, to engaging in militant street actions, to being rounded up and at times beaten and arrested. Anarchists are among the over 100 community members who now face charges ranging from misdemeanor rioting to different felonies.

African-American youth made up the majority of those involved in the actions along with sizable numbers of anarchists as well as other youth of color and activist folk who were all there side by side. During the rioting, there was a sense of unity in the air and a defiant mood of solidarity among all who faced off against the police. Anarchists tend to show up at all demonstrations prepared to act should the situation escalate, and this case was no different. Yet it is simply incorrect to suggest that there was some conspiracy of anarchists from the 'outside' who were able to manipulate the helpless youth of Oakland as part of their sinister agenda. This is a paternalistic and disempowering misreading of what was unquestionably a spontaneous outpouring of rage, led by youth of color, creating an extremely empowering moment for participants in the streets. There, temporary alliances were made as those who were motivated to act in the moment experienced a unique cross-pollination that cut across the inhibiting social boundaries of everyday life.

The allegations of an anarchist takeover are destructively misleading. At best they come from ignorance and at worse they represent a flawed and divisive ideology of social change which embodies paternalistic and racist assumptions about those involved in the actions. To scapegoat anarchists for what transpired, robs from marginalized and oppressed youth of color the agency they possess and the power to resist which they demonstrated that evening. It also ignores the remarkable diversity and unique solidarity in the streets that created an liberating experience far beyond any rally or march.

There were some moments during which individual anarchists attempted to influence the course of events, but these instances still do not fit into the narrative that the corporate media and some organizers have tried to tell. At one point a group of black youth smashing the windows of a locally owned business were encouraged to target large corporations and banks instead of 'mom and pop' shops. They proceeded to do just that. Anarchists also un-arrested youth, and encouraged people to push dumpsters and other objects into the streets to prevent the police from advancing, a tactic that was quickly picked up and utilized. Other examples of this type of interchange involved anarchists encouraging youth participating in the riots to wear bandanas over their faces, change clothes during calm moments and other tactics to help avoid arrest or identification. Without question, the exchange went both ways as anarchists took away valuable lessons in mobility, evasion, and more as they worked together with the youth throughout the night.

None of this, however, suggests that anarchists had some sort of control or single handedly determined the events that transpired. The rage and energy that transformed downtown Oakland into a momentary battlefield came from those who are most directly affected by the racist police state regime. No one group had any control over what unfolded. It was a spontaneous rebellion that sprang organically from the streets of Oakland and in retrospect anarchists played an important yet relatively minor role.

The property destruction and rage that burned throughout downtown Oakland was at times undirected and ended up damaging many small businesses and cars along with corporate targets such as Sears and McDonald's. However, some of the most powerful moments that parralled the destruction were confrontations with police and sponatenous high energy gatherings of people in the street who refused to be dispersed. It was during these moments that chanting would again erupt from the crowd reminding all who were present that the direct political demands of justice for Oscar Grant and active resistance to the racist police state system in the United States were the motivations of all who took to the streets that evening.

It's important to also remember that not one person was assaulted during the actions and there were no reports of fights or scuffles amongst the groups of youth who resisted police and destroyed property into the night. In this sense, the rebellion was not violent. It is disturbing to watch as fellow organizers and members of our communities have uncritically adopted the rhetoric of the right in their confused denunciation of mass property destruction as 'violence'.

On the other hand the Oakland Police Department, who everyday harass, intimidate and beat Oakland's youth, was unleashing its very real violence that night. Police opened fire on crowds with different types of less lethal projectiles and in some cases shot tear gas canisters directly into people's bodies. A Berkeley High teacher had his face bashed during arrest and spent the night in the hospital before being taken back downtown for booking. A man taking pictures was attacked by police and his bike helmet was cracked as he was beaten. During the mass arrest at the end of the night, 80 people were forced by police to lay on their stomachs at 20th and Broadway, including a very pregnant woman who was screaming in pain.

What manifested during the Oakland rebellion was a moment of interchange and revolutionary transformation that rarely happens within the rituals of left organizing in the Bay Area. Between white "community organizers" overtaken by guilt into an impotent politics of servitude, professional activists worried about annual reports and grant cycles, and vanguardist marxist sects continually looking to use the next demonstration as a recruiting drive, many radicals find themselves in a desert devoid of revolutionary activity and thought. Within this barren landscape, it is rare to find new possibilities for radical social change while combatting racism and the constant oppression of capitalism. Resisting the police shoulder to shoulder, destroying property (albeit with different emphasis), helping one another evade arrest, exchanging tactics and gestures of solidarity across racial barriers pushes the desire for a multi-racial revolutionary movement years ahead, more than any speaker at a rally ever could.

Anarchists are very accustomed to accusations of spoiling carefully managed demonstrations, and in some cases this is true and necessary. The Oakland rebellion was a different story. Those who are truly committed to revolutionary change in this country need to appreciate the significance of what unfolded in the streets that night and move forward without falling into the usual sectarian traps.

This analysis was written collaboratively by a group of anarchists based out of Oakland who together were present at all moments during the rebellion.