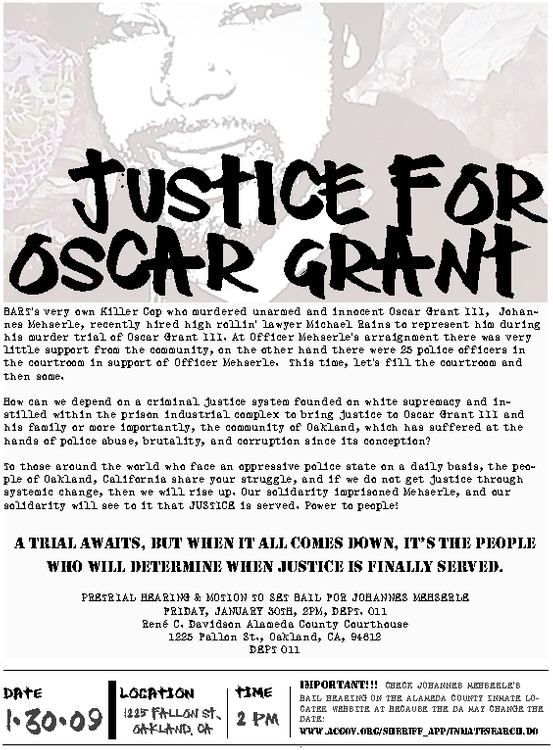 The Bail Hearing is at 2:00 PM in DEPT 011. Make sure to come early due to security checks and parking.
BART’s very own Killer Cop who murdered unarmed and innocent Oscar Grant III, Johannes Mehserle, recently hired high rollin’ lawyer Michael Rains to represent him during his murder trial of Oscar Grant III. At Officer Mehserle's arraignment there was very
little support from the community, on the other hand there were 25 police officers in the courtroom in support of Officer Mehserle. This time, let’s fill the courtroom and then some.

How can we depend on a criminal justice system founded on white supremacy and instilled within the prison industrial complex to bring justice to Oscar Grant III and his family or more importantly, the community of Oakland, which has suffered at the hands of police abuse, brutality, and corruption since its conception?

To those around the world who face an oppressive police state on a daily basis, the people of Oakland, California share your struggle, and if we do not get justice through systemic change, then we will rise up. Our solidarity imprisoned Mehserle, and our
solidarity will see to it that JUSTICE is served. Power to people!

In case the County tries to change the room number or date. Just type in Johannes Mehserle in the following inmate locator to verify.
http://www.acgov.org/sheriff_app/inmateSearch.do
Added to the calendar on Sun, Jan 25, 2009 8:51AM
Add Your Comments
Latest Comments
Listed below are the latest comments about this post.
These comments are submitted anonymously by website visitors.
TITLE
AUTHOR
DATE
I just checked the inmate locator, there are no hearings listed
wrench
How many of the black and working-class community that the police murder can afford bail?
Michael Lyon
if he gets bail, lets get back in the streets.
(A)
NO BAIL FOR MEHSERLE
Want justice
I Hope he Gets Bail
AVNevis
If you can arrive at 9am so the time is not moved up!!!
Cleavon
Support Independent Media
We are 100% volunteer and depend on your participation to sustain our efforts!