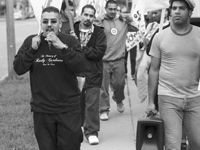 In lieu of recent high profile cases of police brutality and murder, some in the community remember that these atrocities are an ongoing epidemic in the Chicano and Black communities. On February 17, 2004, Rudy Cardenas, a father of five children, was shot and killed by state narcotics agent Michael Walker in San Jose. Jesse Villarreal, a nephew of Rudy Cardenas, was interviewed on February 14th about his uncle’s murder, the organizing efforts to bring attention to the issue, the results of the case, and how this incident is similar to the case involving the murder of Oscar Grant.

Walker was formerly a police officer in Watsonville, where he had a history of reported misconduct. Moreover, the murders of Oscar Grant and Rudy Cardenas have three things in common: both victims were shot in the back by the officers, both victims were unarmed, and both officers in the case are being defended with attorneys recommended by the Peace Officers Research Association of California (PORAC) Legal Defense Fund.

Read more and listen to audio