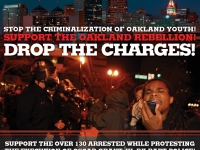 Local groups plan to show support for the more than 130 people arrested protesting the death of Oscar Grant during the month of January on Friday, February 6th and Monday, February 9th starting at 8:30 a.m. at Wiley W. Manuel Courthouse, 661 Washington St, Oakland. Many of those facing charges ranging from misdemeanor rioting to various felonies will have their arraignments on these days. Supporters plan to meet in front of Alameda courthouse early with banners and signs showing solidarity and support for those who are resisting. They also plan to pack the courtrooms in a non-disruptive show of support.

The Oakland 100 Support Committee or O100, says that more than 130 people were arrested in Oakland during operations aimed at containing and suppressing outrage over the New Year's morning execution of Oscar Grant III by BART police and the systemic injustices and abuses communities in Oakland continually face. Many arrestees are young people of color and many were caught in mass police sweeps of public areas. They now face charges ranging from misdemeanor rioting to various felonies. On February 6 and 9, community members will mobilize in a show of support to demand that all charges be dropped.

The O100, a recently formed group dedicated to supporting those facing charges stemming from the January demonstrations against police violence, are working with members of the National Lawyers' Guild, and Critical Resistance to connect arrestees with legal resources and to put pressure on Mayor Dellums and DA Orloff to drop all related charges. The O100 will staff a legal resources table to assist arrestees.