Add an Event
Newswire
Calendar
Features
Home
Donate
From the Open-Publishing Calendar
From the Open-Publishing Newswire
Indybay Feature
Publish to Newswire
Add an Event
Related Categories: East Bay | Police State & Prisons | Racial Justice
Organizers, activists & community demand all charges be dropped against the Oakland 100
by Oakland 100 Support Committee (oakland100 [at] gmail.com)
Wednesday Feb 4th, 2009 9:47 PM
Support the over 130 arrested while protesting the execution of Oscar Grant III. Many of those facing charges ranging from misdemeanor rioting to various felonies will have their arraignments on Friday the 6th and Monday the 9th starting at 9am. Show up out front of court early with banners and signs showing solidarity and support for those who are resisting. We will also be packing the courtrooms in a non-disruptive show of support. Wear all black to show your solidarity! 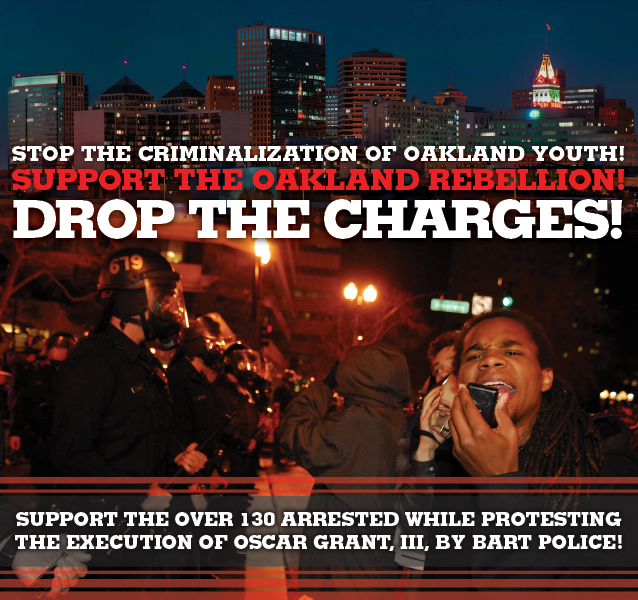 During the month of January, more than 130 people have been arrested in Oakland during operations aimed at containing and suppressing outrage over the New Year's morning execution of Oscar Grant III by BART police and the systemic injustices and abuses communities in Oakland continually face. Many arrestees are young people of color and many were caught in mass police sweeps of public areas. They now face charges ranging from misdemeanor rioting to various felonies. On February 6 and 9, the majority of those caught in these mass arrests will have their initial hearings at the Alameda courthouse and members of the community will be mobilizing in a show of support to demand that all charges be dropped.

The Oakland 100 Support Committee or O100, a recently formed group dedicated to supporting those facing charges stemming from the January demonstrations against police violence, will be working with members of the National Lawyers' Guild, and Critical Resistance to connect arrestees with legal resources and to put pressure on Mayor Dellums and DA Orloff to drop all related charges. O100 is organizing a visible presence in front of the courthouse from 8:30am to 5:00pm on both the 6 and the 9 and will staff a legal resources table to assist arrestees. Folks are encouraged to come and show their support by bringing banners and signs and participating in the presence in front of the courthouse or by helping to fill the courtrooms in a non disruptive show of solidarity. O100 is asking that people dress in all black as a silent statement of support for those arrested.

"DA Orloff has made his priorities clear by dragging his feet when it came to charging a cop who executed an unarmed man on camera and then turning around and rapidly leveling charges against those involved in the demonstrations" said Inez Sunwoo, a member of O100 and Critical Resistance. "For the DA and the entire government and police establishment in Oakland, the lives of young people of color are worth less than some broken windows. This is exactly why people are angry and protesting".

Isaac Ontiveros a member of Critical Resistance and the Plan for a Safer Oakland sees the charges stemming from the January demonstrations as part of a larger systemic problem. "We know that further criminalizing these young people does nothing to make the streets of Oakland safer and does not address the real underlying problems that have created so much outrage. It is because of this systemic criminalization at the hands of police that Oscar Grant was murdered in the first place and we need to stop this violent cycle now."

• Oakland 100 Support Committee
O100 is an all-volunteer group dedicated to connecting those facing charges with legal support, participating in a 'Drop the Charges' campaign, raising funds to assist arrestees and standing in solidarity with the larger movement against police violence. The group is composed of community members, arrestees, and allies.
oakland100 [at] gmail.com

• Critical Resistance
CR is a national grassroots organizations committed to ending society's use of prisons and policing as an answer to social problems.
http://www.criticalresistance.org

• National Lawyer's Guild San Francisco
Dedicated to the need for basic change in the structure of our political and economic system, we seek to unite the lawyers, law students, legal workers and jailhouse lawyers of America, to function as an effective political and social force in the service of the people, to the end that human rights shall be regarded as more sacred than property interests.
http://www.nlgsf.org
§Oakland 100 Support Committee blog
by O100 Saturday Feb 7th, 2009 3:17 PM
Visit supporttheoakland100.wordpress.com to stay up to date on how you can support the Oakland 100.
http://supporttheoakland100.wordpress.com
Add Your Comments
Support Independent Media
We are 100% volunteer and depend on your participation to sustain our efforts!