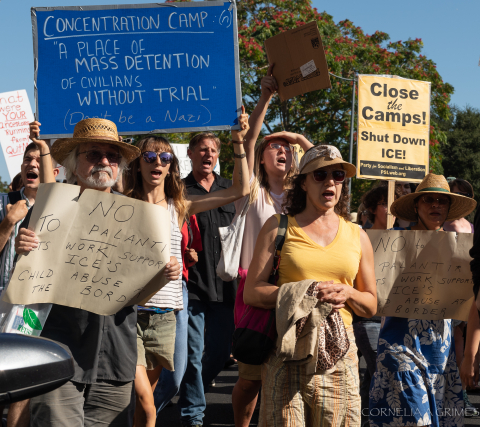 Angry activists mobilized on August 16, blocking the cafeteria entrance at Palantir Technologies' headquarters in Palo Alto. They were protesting the $20 billion data-mining company's ICE Investigative Case Management contract that enables Immigration and Custom Enforcement to track the every move of undocumented immigrants. After Palantir announced on August 20 that they would be renewing their ICE contract, the Coalition to Close the Concentration Camps Bay Area (CCCC-BA) called for an emergency mass mobilization. On August 23, Palantir emptied its HQ on Hamilton Ave in downtown Palo Alto ahead of protesters who splattered blood-colored paint in front of the building and hung a banner from the second story that read, "Palantir You Have Blood on Your Hands."

CCCC-BA describes Palantir as "the tech backbone fueling the deportation, detention, and war machine" and accused the company of making possible workplace raids like the one that victimized 680 people and their families in Mississippi on August 8. In that raid, devastated children were left without their parents who were rounded up at the food processing plants where they were employed.

Protesters had a special message for Palantir employees: "You don't have to be complicit in Palantir’s reign of terror." Palantir's reputation as a contributor to the brutalization of immigrants has meant that Stanford students no longer wish to interview for jobs with the company upon graduation. It was recently revealed that Palantir has struggled to convince some potential recruits because of concerns about how authorities use its products. A member of CCCC-BA said, "Add to that regular protests on the streets in front of its property and it sums up to one thing. Palantir has got problems."