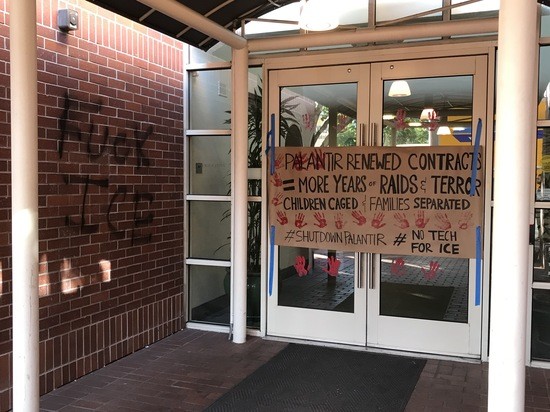 We've just learned that the Palo Alto Police Department has been making phone calls to specific individuals they believe attended the August 23rd demo against Palantir. In at least one case, the police contacted an individual's parents by leaving a message on their home phone and cell phone. Given the level of specificity these ordinary police officers now seem to possess, it's likely that Palantir turned over more than just video surveillance to the Palo Alto PD, all for some simple paint.

No one who was contacted today spoke with the police and it should be obvious that speaking to the police is never a good idea. Their attempts to spread fear are transparent, as is the media-blackout of what happened to Palantir HQ on August 23. Everyone acted collectively that day, and any attempt at their prosecution will reveal the scope of Palantir's assistance to the Palo Alto PD.

We encourage everyone to stay safe, stay together, and don't let up on Palantir. We're clearly winning.
Add Your Comments
Support Independent Media
We are 100% volunteer and depend on your participation to sustain our efforts!