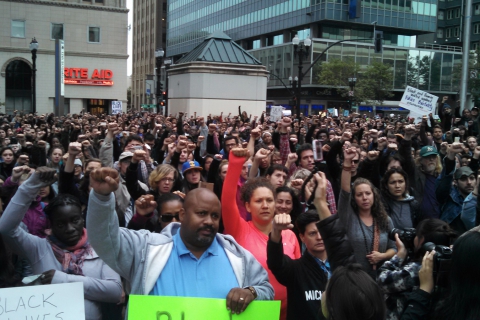 The back to back caught-on-video police murders of Alton Sterling in Baton Rouge on July 5 and Philando Castile in St. Paul on July 6 kicked off a new wave of Black Lives Matter protests across the country. The people of Baton Rouge and St. Paul have been protesting daily since the killings. Solidarity actions have been held in New York, Chicago, Norfolk, Tampa, Atlanta, Dallas, Los Angeles, and numerous other cities. Several freeways have been shut down. Hundreds have been physically attacked and arrested by police. Demonstrations in response to the killings have occurred as far away as London, Berlin, and Amsterdam.

Communities have staged rallies, marches, and vigils across Northern California as well. On July 7, Oaklanders amassed for the largest protest in some time, with around 2,000 people marching and shutting down Interstate 880 for over four hours, right in front of Oakland police headquarters. Protests have been held in San Francisco since July 8, including one the following day that shut down a major onramp to the Bay Bridge. Multiple demonstrations have been held in Santa Cruz, San José, and Watsonville.

Oakland 880 Shutdown: Reverend Ben McBride Speaks Out from the Freeway |

Oakland Shuts Down I-880 for Alton Sterling and Philando Castile |