by Democracy Now!
In St. Paul, Minnesota, hundreds of protesters gathered outside the governor’s mansion to protest the fatal police shooting of African American man Philando Castile during a traffic stop for a broken tail light on July 6. Castile, his girlfriend Lavish Reynolds and her young daughter were stopped by police on Wednesday. Reynolds broadcast the aftermath of the fatal police shooting live on Facebook in an extraordinary video, in which she narrates the events while still inside the car next to her dying boyfriend as the police officer continues to point the gun at her and her daughter. For more we speak with Nekima Levy-Pounds, the president of the Minneapolis chapter of the NAACP: "It is not uncommon to treat black victims and witnesses as criminals in these types of cases." (Diamond Lavish Reynolds' video below) 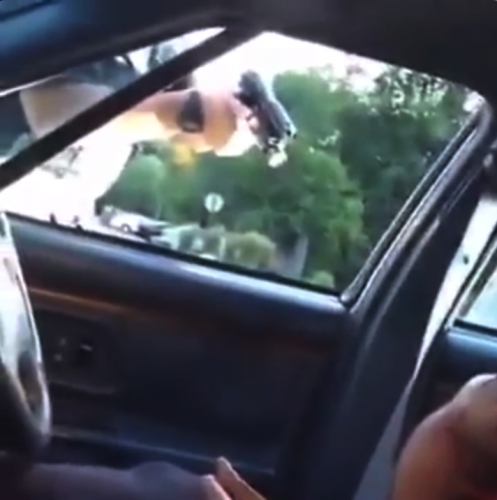 NERMEEN SHAIKH: Welcome to all of our listeners and viewers around the country and around the world. Hundreds of protesters are gathered outside the governor’s house in Minneapolis following the fatal police shooting of African-American man Philando Castile during a traffic stop for broken tail light. The immediate aftermath of the shooting was broadcast live on Facebook by his girlfriend, Lavish Reynolds, who was speaking in the car next to her dying boyfriend as the police officer continues to point the gun into the car. A warning to our TV viewers, the footage is graphic.

LAVISH REYNOLDS: Stay with me. We got pulled over for a busted tail light in the back. And the police just —- he’s, he’s, he’s covered. They killed my boyfriend. He’s licensed, he’s carry. He’s licensed to carry. He was trying to get out his ID and his wallet out his pocket and he let the officer know that he was re—- he had a firearm and he was reaching for his wallet and the officer just shot him in his arm.

OFFICER: Told him not to reach for it. I told him to get his hand off it.

LAVISH REYNOLDS: Don’t be scared. My daughter just witnessed this. The police just shot him for no apparent reason.

AMY GOODMAN: Joining us now from St. Paul, Minneapolis, is Nekima Levy-Pounds, President of the NAACP Minneapolis. Can you explain exactly where you are and your reaction to this latest police killing?

NEKIMA LEVY-POUNDS: Right now there are several of us, dozens of us outside of the governor’s mansion here in St. Paul. We are outraged that this egregious incident happened. Many of us were focused on the killing of Alton Sterling at the hands of the Baton Rouge Police Department. And little did we know that this type of tragic shooting would happen in our own backyard just months after Jamar Clark was killed at the hands of the Minneapolis Police Department. So we’ve been here all night, camped out outside of the governor’s mansion, chanting, protesting and calling upon the governor to issue a statement.

NERMEEN SHAIKH: And can you talk about the St. Anthony Police Department, which has jurisdiction over Falcon Heights where Castile was killed?

AMY GOODMAN: What are you demanding of the governor?

NEKIMA LEVY-POUNDS: Well, number one, we’re asking the governor to issue a statement saying that this type of egregious conduct on the part of officers in Minnesota will not be tolerated. We have a very poor track record in the state of holding officers accountable. We have not held one single officer accountable for shooting an unarmed civilian in the state of Minnesota over the last decade or more. That is problematic. We do not have a public corruption unit as similar to other jurisdictions around the country. And so when an officer-involved shooting happens, we rely upon law enforcement to investigate themselves. There is no independent body that ensures that justice was served and that the investigation was carried out in a fair and impartial manner. In fact, the Bureau of Criminal Apprehension, which is currently responsible for investigating the shooting death of Philando Castile, has not held a single officer accountable over the last several years. And so we do not trust that particular system. We want the governor to use the power that he has to appoint a body that is responsible, such as a special prosecutor and a citizen advisory board, that would look specifically at officer-involved shooting cases and hopefully, ensure accountability.

NERMEEN SHAIKH: Have the police responded in any way? Have they issued a statement, the police department, or so far, any official from the city?

NEKIMA LEVY-POUNDS: The same Anthony Police Department held a press conference shortly after the shooting became public. As you may have seen on the video, the police actually took the phone from Philando Castile’s girlfriend. And the way in which we were able to get access to the video was because she used an app on Facebook that caused, what I would say, is more like a live stream to take place. Had she not done that, the footage from her phone might never have been recovered. And as a matter of fact, after many of us shared the video, the video disappeared from Facebook and her whole Facebook page had disappeared for long period of time. I’m not even sure if it’s back up yet.

AMY GOODMAN: This is —

NEKIMA LEVY-POUNDS: And so some people have placed the video on YouTube as a result.

AMY GOODMAN: This is some of the most astounding footage we have seen. Almost in real-time, it is livestreaming. She is actually protecting herself by doing this with her boyfriend dying next to her and her four-year-old daughter in the back of the car. And then when she is ordered out of the car, she, also a victim, having experienced this — she is ordered to walk backwards? Is this your understanding? And she is handcuffed? She is with her four-year-old daughter and put in a police car as her boyfriend is dying in the car?

NEKIMA LEVY-POUNDS: Yes. Yes. She was being treated like a criminal, which, unfortunately, is not unusual in these types of cases. So, if you look at what happened to Tamir Rice’s sister in Cleveland, Ohio, when he was killed a couple of years ago, his sister was — his 14-year-old sister was actually tackled to the ground, placed in handcuffs and placed in the back of a squad car as she ran to her dying brother. Here in Minneapolis, after Jamar Clark was killed, there were dozens of African-American witnesses on the scene. When the police arrived, they intimidated the witnesses, they sprayed them with mace and pepper spray. They pulled guns on them and they physically pushed them. So, it is not uncommon to treat black victims and witnesses as criminals in these types of cases.

AMY GOODMAN: Nekima Levy-Pounds, we thank you for being with us. Of course, we’re going to continue to follow the story. We’re going to go first, though, to Baton Rouge, find out what’s happening there, and then we’ll be joined by two people who, sadly, their books have just come out on this very issue. I say sadly because this doesn’t stop. We’ll be joined by Marc Lamont Hill who wrote the book, Nobody: Casualties of America’s War on the Vulnerable from Ferguson to Flint and Beyond, and Mychal Denzel [Smith], who wrote, Invisible Man, Got the Whole World Watching: A Young Black Man’s Education. Nekima Levy-Pounds, thanks so much for being with us, President of the NAACP in Minneapolis, in St. Paul right now in front of the governor’s mansion where hundreds have gathered. This is Democracy Now!
END_OF_DOCUMENT_TOKEN_TO_BE_REPLACED
§Philando Castile murdered by St. Anthony police in front of Lavish Reynolds and daughter
by Democracy Now!
Copy the code below to embed this movie into a web page:
Download Video (24.1MB) | Embed Video
END_OF_DOCUMENT_TOKEN_TO_BE_REPLACED
Add Your Comments
Latest Comments
Listed below are the latest comments about this post.
These comments are submitted anonymously by website visitors.
TITLE
AUTHOR
DATE
"To Protect & Serve the *State* & Corporate Capitalism"
No Justice, No Peace!
Support Independent Media
We are 100% volunteer and depend on your participation to sustain our efforts!