by Dave Id
Locking arms with allied clergy across Interstate 880, Reverend Ben McBride speaks out against police violence and corruption, issuing demands to Oakland Mayor Libby Schaaf and Alameda County District Attorney Nancy O'Malley. To the Oakland police department, he says, if you refuse to do what is right, through the power of non-violent direct action, we will pull down your department brick by brick.
Copy the code below to embed this movie into a web page:
Download Video (197.9MB) | Embed Video
(video 12:51)


On July 7, with short notice — angry about the murders of Alton Sterling and Philando Castile, and OPD's recently exposed widespread corruption — Oaklanders amassed for the largest protest in some time, with around 2000 people marching and shutting down Interstate 880 for over four hours, right in front of Oakland police headquarters.

On the freeway, Reverend McBride notes that he and other faith leaders have tried the "inside strategy," that is working with various police departments to reduce violence. Having heard "some of the most horrid things" behind closed doors with Oakland police, he says when OPD claims in pubic to be unaware of corruption, they are lying. He declares that he is no longer going to participate in a false inside strategy, and that is why he is out in the streets demanding justice with the people.

Reverend McBride calls on the Oakland Black Officers Association to reclaim their humanity, to become whistleblowers and speak up on the corruption in their department.

To the Oakland police department, he says, we know you are guilty and we will no longer participate in your games and your conspiracies. We are going to disrupt your empire until you do what is right. If you refuse to do what is right, through the power of non-violent direct action, we will pull down your department brick by brick.

To everyone who feels their status quo is being disrupted by the freeway blockade, he says, our status quo has been disrupted for 400 years.

Reverend McBride expresses gratitude to the large numbers of demonstrators on the freeway. "The people are not here with us. We are here with the people."

— Mayor Libby Schaaf to show moral courage to stand up to Oakland Police Officers' Association and fire officers who have sexually exploited, participated in racketeering, and protected corruption in Oakland police department.

Neither Libby Schaaf nor Nancy O'Malley bothered to come to the freeway as requested. 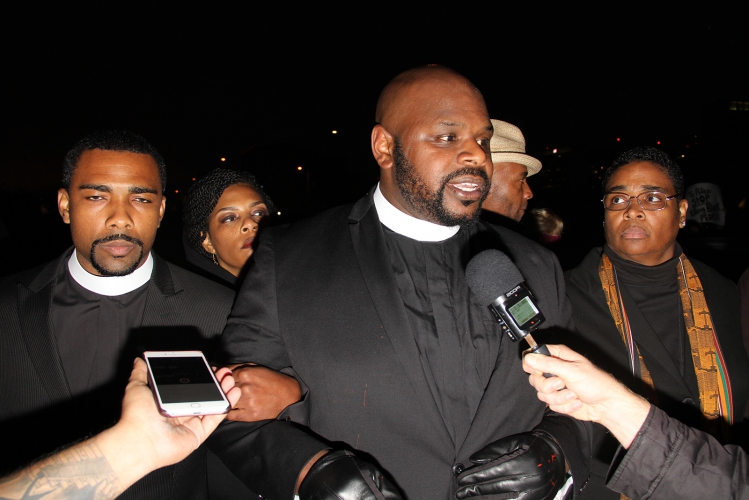 
END_OF_DOCUMENT_TOKEN_TO_BE_REPLACED
Add Your Comments
Support Independent Media
We are 100% volunteer and depend on your participation to sustain our efforts!