by Democracy Now!
Hundreds gathered for a vigil last night in Baton Rouge, Louisiana, to honor father of five Alton Sterling, who was fatally shot by police early Tuesday morning, July 5. Sterling was a 37-year-old African-American. The two officers involved are both white. Bystander video shows Sterling was pinned to the ground when he was fatally shot. The Justice Department has announced it will investigate the killing. Sterling’s death has sparked two days of protests in Baton Rouge, as well as protests last night in Ferguson, Missouri, and Philadelphia, where activists were arrested for blocking Interstate 676. For more we speak with Louisiana State Representative Ted James and artist and activist Donney Rose. Speaking about the Department of Justice investigation, Ted James said: "The federal government has responded in record time. I guess the sad part is, it has happened so many times that the federal government and states know what to do when police officers murder black man in their community." (Triple S Food Mart owner Abdullah Muflahi's video below) 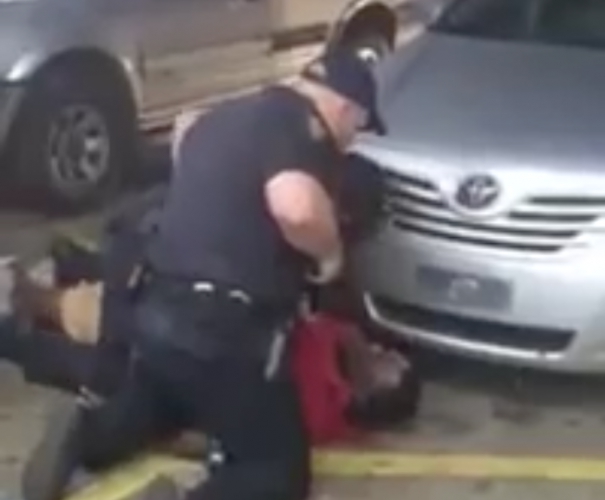 NERMEEN SHAIKH: Vigils are continuing in Baton Rouge, Louisiana, to remember Alton Sterling who was fatally shot by police early Tuesday morning. Sterling was a 37-year-old African-American, father of five. The two officers involved are both white. Bystander video shows Sterling was pinned to the ground when he was fatally shot. Sterling is at least the 38th person killed by Louisiana police since 2015. The Justice Department has announced it will investigate the killing, which has sparked two days of protests. At least two bystanders filmed the shooting on their cell phones. New video posted online Wednesday was filmed by Abdullah Muflahi who owns the convenience store where Sterling was killed. A warning to our TV audience, the footage you are about to see is very graphic.

POLICE OFFICER: Get on the ground.

BYSTANDER: What was that for man?

AMY GOODMAN: The officers involved, Blane Salamoni and Howie Lake II, have been placed on paid administrative leave. In 2014, Lake was placed on paid leave after being involved in the shooting of another African-American man, Kevin Knight. On Wednesday, Alton Sterling’s family addressed the media. This is Quinyetta McMillan, the mother of Sterling’s son, Cameron. At the beginning of the press conference, the 15-year-old Cameron consoled his mother as she spoke. But after a few minutes, he broke down into the arms of supporters standing behind the two of them.

QUINYETTA MCMILLAN: Alton Sterling, regardless if you knew him or not, he is not what the mass media is making him out to be. This is a play to try and obscure the image of a man who’s simply trying to earn a living. To take care of his children. With that being said, the individuals involved in his murder took away a man with children who depended upon their daddy on a daily basis. My son is not the youngest. He is the oldest of his siblings. He is 15 years old. He had to watch this as this was put all over the outlets. And everything that was possible to be shown. As some may know, Alton sold CDs, and was doing just that. Not bothering anyone. And had the consent of the store owners as well. And then the events that recorded during the two officers, that this event would not go unjustice.

QUINYETTA MCMILLAN: It would not go unnoticed, especially for the future.

CONFERENCE ATTENDEE: No justice, no peace.

QUINYETTA MCMILLAN: I, for one, will not rest or not allow him to be swept in the dirt.

AMY GOODMAN: That’s Quinyetta McMillan ,the mother of Alton Sterling’s 15-year-old boy Cameron, who broke down and was held and supported by the people at the news conference. As we go to Baton Rouge where we’re joined by two guests. Edward "Ted" James is a Louisiana State Representative whose district includes part of East Baton Rouge Parish. And Donney Rose is with us, poet, activist, and youth development worker with Forward Arts, a non-profit youth spoken word program in Baton Rouge. We welcome you both to Democracy Now!. Ted James, let’s start with you. Your reaction to what has taken place and to what the police and the governor has said since? But first, talk about what you understand happened to Alton Sterling.

REP. EDWARD "TED" JAMES: To my understanding, both videos speak for themselves and Alton was a man that was well respected, well known in the community. He was there with the consent of the store owner selling CDs as he has done many days and many nights on that same street, the street on which I grew up and spent many, many years. And before Alton was shot and killed, he was tackled against the car. He was tased several times, and then he was murdered, as you see depicted in the two videos. I can’t even watch the second one. Just sitting here listening to the audio, it frightens me to even hear it.

The community, I will tell you, has shown an outpouring of support for the family. I’m extremely proud of the work that we have been able to do through our governor here. The federal government has responded in record time. You hadn’t seen that across the country, and it speaks to the level of — I guess the sad part is, it’s happened so many times that the federal government and states know what to do when police officers murder black men in their community. So the governor’s office reached out. There was a lot of coordination between our congressional representative Cedric Richmond and those local leaders on the ground. the federal government is here now taking over the investigation, which many of us called for — that was the first thing that we asked for, independent investigation. That’s only one small step. We don’t want the federal government to just investigate. We want them to do a thorough investigation. We don’t want any stone unturned. And as the family has continued to pray with us, they want justice and we want to see justice for Alton Sterling as well.

NERMEEN SHAIKH: And Donney Rose, can you talk about your reaction to Alton Sterling’s killing, and also about the Blue Lives Matter bill which was just signed into law in May?

DONNEY ROSE: My reaction was definitely one of devastation. It was traumatic to watch the videos. I initially saw the first video — I watched it with apprehension and then I watched the second video and it was even more horrifying. Tragic — unfortunately, there are certain precedents that had taken place prior to this killing that almost set — set the stage for it. So, a few months back, a young man was beaten by police officers at an Earth Day Festival.

And then in reference to the Blue Lives Matter bill, which essentially makes killing a first responder or police officer a hate crime, it puts the precedent over the lives of — puts the precedent of the lives of officers over those of regular civilians. So, there’s almost a level of lawlessness that’s at play that is not — that goes unchecked. And so, it’s devastating that our community is now present-day Baltimore, is [Ferguson], New York City, and even now is also aligned with St. Paul and what’s going out there.

AMY GOODMAN: I wanted to go through, State Representative Ted James, the timeline. We’re talking about, what was it, 12:35 Tuesday morning, so this is Monday night into Tuesday morning. The police say they get a call from an anonymous person that someone has brandished a gun. Now, the police move up. They —-what do you understand happened at this point? Now, we hear this differently in New York than people here and around the country because you have, what, open carry laws? You can carry guns in Louisiana? Like, when we hear it, it’s a totally different -— since we have what’s going on when a civilian is holding a gun.

REP. EDWARD "TED" JAMES: Yes, we, we do have open carry in, in Louisiana. Louisiana, you know, a lot of my colleagues, you know, probably proclaim that we are the most pro-gun state in the country. But when a black man is carrying a gun, he is always perceived as a criminal. And we still don’t know who made that, that call to 911. We still haven’t heard a name there. But we do know that the police officers who have not been on the force — neither one of them had been on the force for five years. Both of them are perceived as royalty in our police department because of the long tenure of their parents. They’re in a specialized unit that most of our officers have to go through many, many years on the force before they’re even placed in this unit. And what we’ve learned is that those folks who we rely on to serve and protect us, rushed to judgment. And what happened, because of their rush to judgment, they killed an innocent man for doing what he does legally every single day and standing outside minding his own business.

You know, we still have not heard anything about this person who made the call. The store owner, he was the first eyewitness to come to us. And everything that he said happened was depicted on the video. And we’re relying on that eyewitness testimony. And certainly, you know, I’m excited that he was brave enough to share that video. He was under a lot of stress and scrutiny. The police officers had him in the back of a police car while they took his surveillance video — no warrant, did not ask him, just took his video. We still haven’t seen that. That’s the next big push for us, is to — we want to see that video. We want to see what was depicted there.

NERMEEN SHAIKH: Well, I want to go to a clip of Abdullah Muflahi, who owns SS Food Mart, the convenience store in Baton Rouge, Louisiana, where Alton Sterling was fatally shot by police early Tuesday morning. Muflahi told reporters he witnessed the shooting.

ABDULLAH MUFLAHI: I was shocked. I thought it was like a nightmare. It was crazy, seeing your own friend getting shot in front of you. It’s, it’s horrifying. Scary. By the time I get outside, they are throwing him on top of the car. From there they tasered him. Then other cop tackled him onto another vehicle. From there they throw him onto the ground where both of them got on top of him. One of them screaming, was like, "gun, gun," shot him three times. Then they telling him get on the floor. He’s already on the floor. They shot him three times already. Then they shoot him another three times. He was a nice guy. Always smiling, always happy, always joking around with people. Never seen him get into fights with anybody. Never seen him get into any kind of even arguments out there with people.

NERMEEN SHAIKH: That was Abdullah Muflahi, who witnessed the fatal shooting of Alton Sterling.
END_OF_DOCUMENT_TOKEN_TO_BE_REPLACED
§Triple S Food Mart owner Abdullah Muflahi's video
by Democracy Now!
Copy the code below to embed this movie into a web page:
Download Video (1.5MB) | Embed Video
END_OF_DOCUMENT_TOKEN_TO_BE_REPLACED
Add Your Comments
Support Independent Media
We are 100% volunteer and depend on your participation to sustain our efforts!