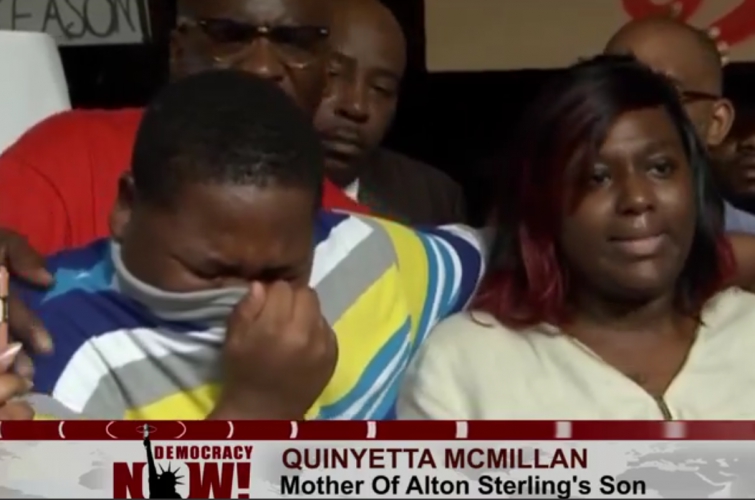 NERMEEN SHAIKH: On Wednesday, the U.S. Justice Department announced it will lead an investigation into the fatal police shooting of Alton Sterling. Baton Rouge Mayor Melvin Holden responded by telling reporters the city can be trusted to determine the facts of the shooting death.

MELVIN "KIP" HOLDEN: It’s not like we need to be handheld and spoonfed when it comes down to doing what’s right. And so when we tell you these things and what’s going on is very, very important that you understand we are doing our best to make sure we get all the answers.

CHIEF CARL DABADIE JR.: At this point, like you, I am demanding answers. Like you all, my prayers are with this community and especially with the family and loved ones of Mr. Sterling. And all the members of the Baton Rouge Police Department who are working hard every single day.

MICHAEL MCCLANAHAN: We are here today to speak to the culture of the Baton Rouge Police Department. You know, this, this, this incident is only one incident in many. What we’re going to do today is root out the one percent of bad police officers that go around becoming the judge, the jury, and the executioner of innocent people, period. But, more specifically, innocent black lives.

AMY GOODMAN: We are now joined by Arthur Reed, known as "Silky Slim," founder of Stop the Killing, a youth mentoring program based in Baton Rouge. His organization provided the cell phone video of the police shooting of Alton Sterling. Can you explain how this happened, Arthur reed? Can you explain this, this just horrifying video? How did you come to have this, how did you come to film this, your group?

ARTHUR "SILKY SLIM" REED: Well, for several years, we have been gathering footage for documentaries on — that we do on urban violence, and we have several people that work with our organization that filmed things that they see in the communities. So, this was something that we obtained and something that we knew we had to get out as soon as possible. And it is horrifying to look at the video. Like Ted said, is that the first video is lookable, but it’s still disturbing, the second video is definitely heartbreaking and wrenching.

NERMEEN SHAIKH: And can you talk about, Arthur Reed, previous incidents of police violence in Baton Rouge?

ARTHUR "SILKY SLIM" REED: Um, a few months ago, we had a individual in the [indiscernable] area that was actually tased to death by the Baton Rouge Police Department. That has just been put under a lawsuit. But, they were justified in that. What we have here is acts of violence by the police department that is being passed down and all of them are being justified. That’s not just in Baton Rouge, that’s in America period. You look at the Eric Garner case, the Tamir Rice case and many other cases that are taking place in America, we can’t even get these individuals to be indicted, let alone brought to justice. And it is our belief here that we’re dealing with some type of secret society that’s imposing themselves as law enforcement and are definitely killing African-Americans.

ARTHUR "SILKY SLIM" REED: Well, we’re not talking about how the video came into effect because you got to realize, if you have two police officers that just killed a man for doing what he do, what do you think they’ll do if they find out who actually shot the video? They would murder them. So, we’re not dealing with ordinary people here. We’re dealing with murderers that have badges that is turned into a license to kill here.

AMY GOODMAN: But can you explain, the evening that your group, Stop the Killing, the video that you are gathering?

ARTHUR "SILKY SLIM" REED: Well, well the video was gathered because individuals were aware there were some type of disturbance at the store. When they got there, they started recording what they felt would actually be police brutality, and it escalated into a murder. So, the video, like Ted said, the video definitely speaks for itself. What’s so befuddling is how that you can watch this video and then still look at this as being justified. I think that’s sickening. And when you look at it, the issue is what everybody is trying to point out, well, he had a gun in his pocket. He never reached for the gun. His hands was on his chest, and he was begging, please, don’t kill me. All of that’s on the tape. You can hear that. So, if I’m trying to murder a police officer or anybody, I’m not gonna be hollering, please, don’t kill me, I’m gonna be hollering, I’m gonna kill you. So, we have to look at the facts in this. And I think the video speaks volumes for what actually happened. This was a execution. This was an assassination. This is murder at the fullest. And we don’t want to deal with that because we always try to overlook these issues, especially when it comes down to the African-American community. But, what you see right here is that these communities are actually fed up with this. They are sick and tired of seeing this happen to their loved ones. And at the end of the day, we look at a backlash because we look at the violence that’s taking place in our community. Stop the Killing has been an organization that says that black lives matter, but we also let them know that black lives have to matter to black people first. So, we are pushing that agenda as well. So, we can’t say that we’re not trying to deal with all the problems. We dealing with everything. We putting it all out on the table. But here in Baton Rouge, we have elected officials who don’t want to rock the boat, and you have to rock the boat here. Because we cannot continue to let this happen and give them a license to kill us and don’t say anything.

AMY GOODMAN: Well, we want to thank you for being with us, Arthur "Silky Slim" Reed, founder of Stop the Killing, the youth mentoring program, based in Baton Rouge. His organization provided the cell phone video of the police shooting of Alton Sterling. And thanks so much to Ted James, Louisiana State Representative whose district includes part of East Baton Rouge Parish. As well as Donney Rose, poet, activist and youth development worker with Forward Arts. And this, just, note, before we go to break, the man who filmed the chokehold death of Eric Garner, Ramsey Orta, is headed to prison today for four years. The daily news is reporting, soon. Ramsey Orta was in Manhattan criminal court to collect paperwork on Wednesday. Said he’s pleading guilty to a weapons and drug charge and is preparing to head upstate as part of that plea deal. The only person in the Eric Garner case who has been jailed. This is Democracy Now!
http://www.democracynow.org/2016/7/7/murde...
§Stop the Killing video
by Democracy Now! Thursday Jul 7th, 2016 1:04 PM
Copy the code below to embed this movie into a web page:
Download Video (1.5MB) | Embed Video
http://www.democracynow.org/2016/7/7/murde...
Add Your Comments
Support Independent Media
We are 100% volunteer and depend on your participation to sustain our efforts!