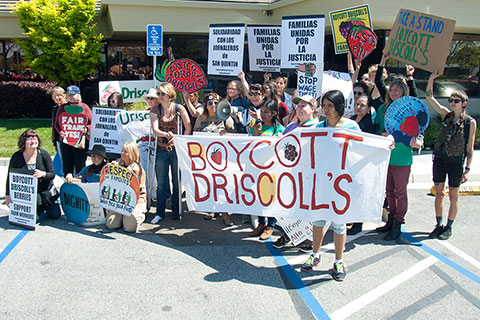 Familias Unidas por la Justicia (FUJ) has embarked on an historic 28-day tour of the West Coast to organize a major offensive on the world’s largest berry distributor, Driscoll’s Berries. FUJ President Ramon Torres and a crew of FUJ members are making stops in communities throughout Oregon and California. The local independent farmworker union, based in Burlington, WA, is touring the coast at a crucial moment in their campaign for a union contract at Driscoll's producer Sakuma Brothers Farms in Washington.

Driscoll’s and Sakuma are feeling pressure from the growing amount of boycott activity, which has grown tremendously since FUJ called for the boycott in the fall of 2013. The pressure has grown even more since over 80,000 farmworkers who also pick berries for Driscoll's in San Quintín, Mexico went on strike, formed a union, and endorsed the boycott in March of 2014.

The main goals of the tour are to strengthen the existing boycott committees that are playing a crucial role in the struggle, and to recruit activists to form new committees where they don’t exist. Demonstrations and other events are taking place throughout the San Francisco and Monterey Bay areas, Central Valley, and southern California, as well as at the U.S. / Mexico border. On Thursday, March 31, there was a major action at Driscoll’s headquarters in Watsonville, as well as a smaller demonstration at Whole Foods in Palo Alto.

Photos and Video by AutumnSun |

Demo Inside Safeway in Watsonville